Danelly Estupiñán will never forget the first threats she received back in 2015. First came the text message declaring “Danelly, your end has come.” And then a distorted voice over the phone, repeating: “we know where you are”.

Since then, Estupiñán has been constantly followed, photographed and had her home broken into, in apparent retaliation for her human rights work defending black communities in Buenaventura, Colombia’s biggest Pacific port. “I don’t go out anymore… because wherever I go, they’re there,” she told Amnesty International in June, shortly before fleeing the country upon learning of a plot to kill her. “I have no social life, I have nothing.”

Having lost fathers, husbands and sons to years of bloodshed, women of African heritage like Estupiñán are taking on more active roles in defending their ancestral communities. Yet standing up to corporations and criminal organizations who seek to oversee development projects, mineral extraction and drug-trafficking in their territories has put them in the crosshairs.

Sunday is the third anniversary of the Peace Agreement that Colombia signed with the FARC guerrillas, but this has not quelled violence, with many other armed groups still competing for influence. Public anger at the government erupted into widespread mass demonstrations on Thursday, as hundreds of thousands of Colombians took to the streets. State security forces responded heavy handedly to protesters, who expressed their discontent over social reforms, the relentless killings of human rights defenders and the government’s failure to fully implement the terms of the Peace Agreement.

Colombia is the world’s deadliest country for human rights defenders, with Frontline Defenders registering at least 126 killings there last year. It’s also home to 7.8 million internally displaced people, more than any other country, according to a 2018 UN report. Indigenous leaders comprise many of the victims, but black women are increasingly at risk in the western provinces where Colombia’s Afro-descendent population is concentrated.

Since taking office last year, President Iván Duque has strengthened specialist police units to protect human rights defenders and offered rewards for suspects wanted over killings. His government is providing protective measures for about 3,700 defenders but these have proven flawed and insufficient. State-provided cars and mobile phones are useless to people who cannot afford fuel or live in remote areas with no signal. Bulletproof vests are cumbersome and draw unwelcome attention, while panic buttons do not always draw quick enough responses from police to deter killers.

Estupiñán, a leader of the Afro-Colombian rights group Proceso de Comunidades Negras, is one of the most prominent activists in Buenaventura, a gritty, sweltering hub. In the last 20 years, Buenaventura’s Afro population has faced a wave of killings, torture, sexual violence and enforced disappearances at the hands of paramilitaries infamous for dismembering their victims.

Danelly Estupiñán of the Proceso de Comunidades Negras (PCN) speaks at the funeral of a young girl who as murdered in Buenaventura, Colombia.
Duncan Tucker/Amnesty International

Many in the black community believe the violence is a manifestation of structural racism and discrimination, aimed at driving them from the waterfront areas where they have lived for generations in stilted wooden huts, so the government and private developers can press ahead with plans to expand the port and build tourist infrastructure.

Estupiñán says “the violence is aimed at destroying the social fabric to create a weak community that can be controlled socially, culturally and politically.” Women are being targeted to prevent them from repairing that social fabric, she says, with paramilitaries using femicide and rape as systematic tools to control their territories and intimidate the population.

Many women displaced from black communities seek refuge in Cali, southwestern Colombia’s biggest city. Erlendy Cuero, vice-president of the National Association of Displaced Afro-descendants (Afrodes), fled Buenaventura in 2000 when her father was murdered, she was sexually assaulted, and her house was destroyed in a land dispute.

Cuero told Amnesty International she has suffered constant threats, harassment and break-ins at her modest redbrick home on the outskirts of Cali. Despite this, the government rejected her requests for protection until her brother Bernardo Cuero—another prominent human rights defender and Afrodes leader—was shot dead in 2017.

The authorities had provided Bernardo with protective measures but withdrew them against his wishes months before he was killed, having decided he was no longer at risk. Nine months later, gunmen also killed Bernardo’s son, Javier Cuero. Erlendy Cuero’s 21-year-old son, Alex, has been targeted too. He survived a shooting in 2016 and narrowly avoided a stabbing last year when his pet pit-bull fought off the assailant. Cuero believes the attacks against her family were a message to her to “keep quiet or we’ll hit you where it hurts the most.”

Francia Márquez, a Goldman prize-winning environmentalist, is also living in Cali after being displaced from her home in La Toma, a rural area two hours to the south, when gunmen came looking for her in 2014. Márquez told Amnesty International she began receiving threatening letters and phone calls in 2010, when she was defending La Toma against the devastating environmental and social impact of illegal mining. That year she won a case in Colombia’s Constitutional Court, which suspended concessions in the area belonging to the multinational AngloGold Ashanti.

“The armed groups said they were declaring us a military objective because we were blocking the entrance of multinationals and obstructing development. What development? Who’s the development for if my community doesn’t have clean water and we’re drinking water poisoned by mercury from the mining?” Márquez asks. “I can live without gold and jewels. I can’t live without water or food.” AngloGold has denied any link to the threats against Márquez and denounced a recent attempt on her life, when armed men opened fire and threw grenades at her during a meeting of black leaders at a farmhouse in May.

Many human rights defenders do not survive such attacks. In June, assassins on a motorcycle shot dead María Hurtado, another Afro leader, in the town of Tierralta. Hurtado had defended her community in a land dispute and had recently denounced threats from paramilitaries.

Instead of being assigned flawed protective measures on an individual and inconsistent basis, Colombia’s human rights defenders need comprehensive collective measures tailored to the specific needs of their communities and developed in accordance with their wishes. The government must also work to eradicate the corruption, impunity and stigmatization that fuel the marginalization and exploitation of Afro communities and the killings of those who defend their rights.

Undeterred by the threats against her, Márquez insists that women have a key role to play in the defense of human rights because their “caring instinct” drives them to protect not only their children, but also their territory, the environment and the people in their communities.

“We need to feminize politics and fill humanity with maternal love,” she says. “War has always been driven by machismo, by the patriarchy and by business between men. I think these men need to stop being so aggressive in life and think about feminizing themselves.” 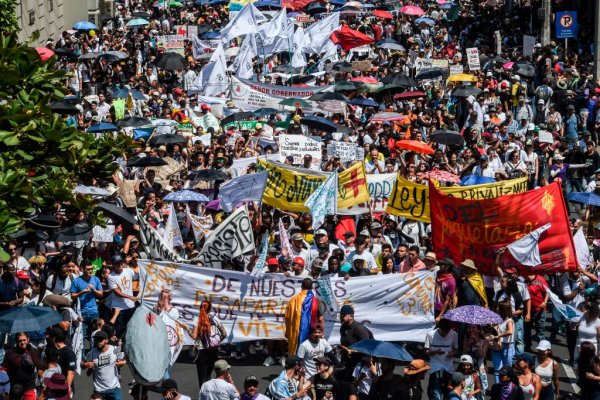 Student Protester’s Death Sparks Fresh Protests in Colombia. Here’s What to Know
Next Up: Editor's Pick