Remember That Guy Who Accidentally Got Invited to a Random Grandma's Thanksgiving in 2016? Here's How They're Still Celebrating the Holiday Together

It’s been four years since a Phoenix teen received the fateful text that would turn his Thanksgiving plans on their head. But now-20-year-old Jamal Hinton couldn’t be more grateful that Wanda Dench accidentally messaged him thinking she was talking to her grandson back in 2016.

The progression of Hinton and Dench’s relationship is definitely something you don’t see every day: a phone number mix-up transformed into a truly meaningful connection. Their story first blew up in 2016 when Hinton shared their initial text exchange on Twitter with the caption, “Somebody grandma is coming in clutch this year!! Ayee!!!”

The tweet was liked over 127,000 times and retweeted nearly 44,000, turning Hinton and Dench into overnight viral stars.

The texts featured in the tweet showed that Dench had mistakenly texted Hinton thinking she was inviting her grandson to Thanksgiving dinner. “The text said, ‘Thanksgiving at my house’ and it was from a grandma, but I was like, ‘When did my grandma learn to text!?'” Hinton told People in 2016.

Confused, Hinton responded by asking Dench to send a selfie so he could see who she was and then sent her one of his own. But even after realizing there had been a mix-up, Hinton was curious to know if he could “still get a plate.”

“Of course you can,” Dench fortuitously replied. “That’s what grandmas do…feed every one.” Her text turned out to be a harbinger of a rare bond that the internet felt an instant and strong connection to.

Hinton tells TIME that he initially felt “kind of weird” being invited to Thanksgiving by a stranger, but decided to go after meeting Dench in person ahead of the holiday meal. “What made me want to go was that I went and actually met her and she was pretty nice. So I decided that I’d just go and enjoy the time with her,” he says. “It turned out to be a great thing.”

Thus, a tradition was born and Dench was able to fulfill her promise of hosting Hinton. “She’s a great cook and she’s a great person to just hang out with,” he says, noting that his favorite Thanksgiving dishes that Dench makes are her green bean casserole and the star of the show itself, the turkey.

Since 2016, Hinton has spent every subsequent Thanksgiving at Dench’s home in the neighboring city of Mesa, Ariz., and each year, the unlikely duo has grown more popular online. Hinton’s 2018 post about the now-annual occasion, which featured selfies of himself and Dench from each of the three years they had celebrated together, racked up nearly 582,000 retweets and 130,000 likes.

Last year, Hinton even brought his girlfriend Mikaela along to hang out with Wanda and her husband Lonnie on the big day. And if you’re wondering how the group spends their time together, Hinton says they all just enjoy catching up on each other’s lives.

“We don’t watch TV or anything. We just sit at the table for a couple of hours and talk the whole time and tell stories and see how we’ve been,” he says, adding that this year he plans to bring the game of Monopoly that Dench gifted him last year so they can all play together. “Time kind of just flies, we don’t even realize how long we’ve been there. They’re really good company.”

As for whether Hinton ever plans to repay the favor by hosting Dench for Thanksgiving, he tells TIME that he and Mikaela wanted to have people over to their new apartment this year, but they aren’t moving in until the day before the holiday.

“We wanted to host Thanksgiving but I think it’s basically impossible since we’re moving in the day before,” he says. “Next year.”

Can we all be invited next year too? 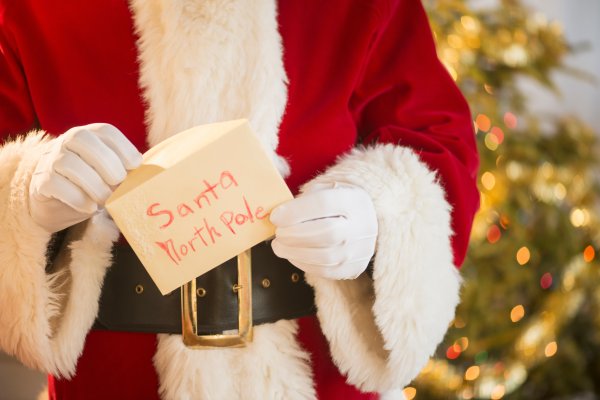 'No Idea What the $4,000 Is For.' Extremely Direct 10-Year-Old Girl's Christmas List Wins For Being the Most Extravagant and Boundless
Next Up: Editor's Pick