Why Corporations Can No Longer Avoid Politics

For decades, most companies went to great lengths to avoid opining on social issues. No longer.

After a mass shooting at a Walmart in El Paso, Texas, in August, the retailer said it would stop selling ammunition for military-style assault rifles. Patagonia closed its offices and stores for part of the day on Sept. 20 so employees could participate in a global climate strike. And in November, Chick-fil-A, which has come under fire for supporting Christian organizations that oppose same-sex marriage, said it would stop donating to those groups.

What’s changed? Frustrated with political gridlock, consumers have turned to business for leadership. “I think business has to pick up the mantle when governments fail you,” Patagonia CEO Rose Marcario told TIME earlier this year. Young consumers are also more likely to patronize brands whose business models claim to include social change. Nine in 10 members of Generation Z, who account for as much as $150 billion in spending power globally, believe that companies have a responsibility to social and environmental issues, according to McKinsey. In an age when companies have detailed information on customers’ ages, incomes and political persuasions, they’re calculating that these socially aware consumers are more lucrative than those who might be put off by social-justice campaigns.

“In a politically polarized world that is saturated in social media, you’re not going to escape politics,” says Jerry Davis, a professor of management and sociology at the University of Michigan. “This is a sea change–in the past, companies kept their heads down and did their best to never be seen.”

Companies are also trying to make their politics more appealing to Generation Z as they try to recruit young workers. Last year, after thousands of employees demanded that Google not work with any entity building “warfare technology,” Google decided not to renew a contract with the Pentagon. In September, after Amazon employees planned a walkout to call attention to the company’s lack of leadership on environmental issues, Jeff Bezos released a climate pledge.

“Woke capitalism” started picking up steam early last year. After the Parkland school shooting, Delta joined a dozen or so companies in ending discounts for NRA members, even after the state of Georgia threatened to take away nearly $40 million in state tax breaks on fuel the airline received. That September, Nike released an ad featuring Colin Kaepernick telling customers to “believe in something, even if it means sacrificing everything,” a show of support for the former NFL quarterback who, after kneeling during the national anthem to draw attention to racial injustice, was not signed to a team. In November, Blake Mycoskie, founder of Toms shoes, announced the largest-ever corporate gift–$5 million–to groups working to end gun violence.

Not every customer, or cohort, has welcomed the shift. In April 2016, for instance, the retailer Target faced a backlash after releasing a statement saying that customers and staff could use the bathroom that corresponded with their gender identity. Christian groups called for a boycott; a pastor said the company was opening the door for “perverts and pedophiles”; and some customers said they would switch to Amazon and Walmart.

Still, companies are learning that it may be riskier to pretend it’s all business as usual. After the Washington Post reported that Stephen Ross, an investor in Equinox and SoulCycle, was hosting a fundraiser for President Trump, customers urged a boycott. Although SoulCycle said Ross was a “passive investor,” attendance at SoulCycle classes decreased significantly in September and October from the same period last year, according to Earnest Research. When the NBA tried to walk back a tweet by Houston Rockets general manager Daryl Morey supporting protesters in Hong Kong, fans in the U.S. mocked the league for valuing the Chinese market more than democracy. The NBA quickly pivoted. At the TIME 100 Health Summit in October, NBA commissioner Adam Silver said he hadn’t intended the initial response to read as a condemnation of Morey’s words. “Maybe I was trying too hard to be a diplomat,” he said. 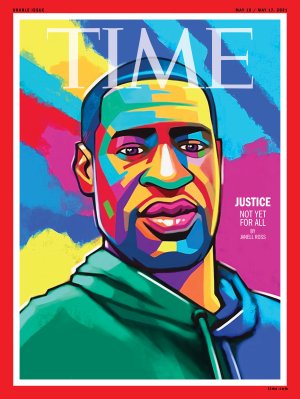 The Story Behind TIME's George Floyd 'Justice—Not Yet For All' Cover
Next Up: Editor's Pick