Two experienced female Senators walk into a presidential debate. Both are trailing in the polls behind an inexperienced male mayor with some glaring political weaknesses. Both know that this debate is a make-or-break moment, one that could decide whether they advance to the next phase of the campaign.

And yet, the two moments that Sen. Kamala Harris and Sen. Amy Klobuchar sparred with Mayor Pete Buttigieg amount to a case study for how gender works in the 2020 campaign. Men are rubber, women are glue: if you’re a female candidate, you know that your attacks on your male rivals may bounce off him and stick to you.

Every time Harris and Klobuchar were poised to whack Buttigieg, they pulled their punches. They faltered. They softened the blow. Those moments were instructive. They were not evidence that Harris and Klobuchar can’t fight; both are former prosecutors who know how to go for the jugular (and have demonstrated that ferocity on the public stage). And they were not evidence of Buttigieg’s comparative strength on either substance or political viability; Harris rose through the ranks of California politics to be the first black woman elected state attorney general, and Klobuchar is one of the most productive and bipartisan members of the Senate, having passed more than 100 bills, many with Republicans. (Buttigieg’s major accomplishments as mayor in South Bend include expanding the roads and revamping the downtown.)

Instead, these pulled punches demonstrate the binds women candidates face when they consider going on the offensive. You could almost see Harris and Klobuchar do the calculus in their heads: how to nail Buttigieg without attacking him, how to point out his weaknesses without seeming petty, how to destroy him without destroying themselves.

This careful assessment was borne of experience. Both women have seen their anger used against them. In an earlier presidential debate, Harris faced blowback after she confronted Biden about his past opposition to bussing, and Klobuchar has weathered persistent allegations that she is a demanding and exacting boss who occasionally yells at her staff. Both women know that forceful men are all often described as strong and assertive, while forceful women are dismissed as angry, emasculating or hectoring. (This is especially true for Harris, who is doubly confined by racist stereotypes about “angry” black women.)

At the debate Wednesday, both Harris and Klobuchar’s calculations ended in the same result: even when given the opportunity to attack, they ended up talking about their own strengths more than Buttigieg’s weaknesses—which ultimately let him off the hook.

The moderators teed up Harris to attack Buttigieg’s failures to reach black voters, and it should have been an easy hit. Harris is the only black woman serving in the US Senate at a time when black women are crucial to the Democratic Party. Compare that to Buttigieg, who is currently polling at 0% with black voters in South Carolina. His campaign has come under fire after a memo was leaked suggesting that his sexuality was a “barrier” for black voters, for failing to diversify the police force in South Bend, and for allegedly exaggerating black support for his signature racial justice plan. And yet, when Harris was asked about Buttigieg’s struggles on race, she took a deep breath, grimaced, and held her fire.

“I was asked a question that related to a stock photograph that his campaign published,” she said. “I believe that the mayor has made apologies for that.” Flustered, she then went on to “speak to a larger issue,” describing how black women are the backbone of the Democratic Party, pointing out the sky-high rates of maternal mortality for black women, the wage gap, and the fact that black women are the mothers of the black boys who are so often killed by gun violence. “I think candidates have taken for granted constituencies that have been the backbone of the Democratic Party,” she said in a muted attack. “The question has to be, where you been? And what are you going to do? And do you understand who the people are?” It was a pulled punch.

Buttigieg responded as if he had taken a full hit, for which he had no doubt prepared. “I completely agree,” he said. “I welcome the challenge of connecting with black voters in America who don’t yet know me.” He then used the question to pivot to a broader argument about his candidacy, to talk about “what’s in my heart,” his faith, and his marriage. “I care about this because, while I do not have the experience of ever having been discriminated against because of the color of my skin, I do have the experience of sometimes feeling like a stranger in my own country, turning on the news and seeing my own rights come up for debate,” he said.

If Harris had been able to actually attack Buttigieg, it would have been a stumble for him. Instead, he banked yet another positive moment in the spotlight.

A couple minutes later, Klobuchar fell into a similar pattern. After gearing up to highlight Buttigieg’s relative inexperience, she, too, blunted her offensive. When Buttigieg answered a question about voting rights, Klobuchar pointed out her long record on voting rights legislation. “He has said the right words, but I actually have the experience and of leading 11 of the bills that are in that House-passed bill you just referred to,” she said, adding the the mayor had never won statewide office. “This kind of experience matters.” In other words, a female Senator with nearly a decade and a half of experience in national politics was forced to explain why she was more qualified for the presidency than a male mayor, who was first elected in 2012, and—because of those double standards—she had to do it in an even tone, without sounding indignant or resentful. Again, the strain was obvious: the Senator trembled as she talked.

As far as hits go, Klobuchar’s was glancing at best. And once again, Buttigieg absorbed the criticism and pivoted to lofty rhetoric about himself. “Washington experience is not the only experience that matters,” he said. “I have the experience of being commanded into a war zone by an American president. I have the experience of knowing what is at stake as the decisions made in those big white buildings come into our lives, our homes, our families, our workplaces, and our marriages. And I would submit that this is the kind of experience we need, not just to go to Washington, but to change it before it is too late.”

Both moments should have been clean victories for Harris and Klobuchar; both ended up moments in which Buttigieg was allowed to waxed poetic. Instead of being on the defensive, Buttigieg was able to fail up.

That’s because Harris and Klobuchar were going into this fight with one hand tied behind their back: confrontation is the core of political debate, and yet for women candidates, it can be fraught with peril. Just look at Sen. Kirsten Gillibrand, who took a principled stand against Sen. Al Franken in the wake of his #MeToo allegations, and then had to drop out of the presidential race after donors said she was “opportunistic” and “duplicitous.” Or Rep. Tulsi Gabbard, who was on the offensive for most of the night (sometimes on bizarre tangents) and yet failed to break through. Or Sen. Elizabeth Warren, who so far has declined to unleash her famously withering wit against anyone except the billionaire class—maybe for exactly this reason.

The cruelest irony came early in the night, when Klobuchar was asked point-blank about her previous comments that a woman with Buttigieg’s resume wouldn’t be on a presidential debate stage. Even when talking about the double standards women face, Klobuchar was constrained by them. Rather than attacking Buttigieg, she played nice, calling him “qualified” and saying she was “honored” to stand next to him onstage, before pivoting to a broader—and safer—point. “Women are held to a higher standard,” Klobuchar said. “Otherwise, we could play a game called ‘name your favorite woman president,’ which we can’t do, because it has all been men.”

The moment illustrated how breaking gender barriers doesn’t necessarily eliminate them. Even on a presidential debate stage with four women candidates, nobody has figured out how to fight like a girl. 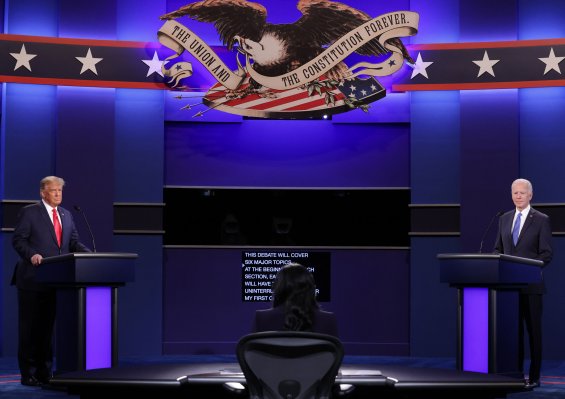