Scientists have developed a new method of trapping rubidium atoms in a lattice of light, which could help the development of quantum computing.
Christine Daniloff / MIT
By Matt Peckham

That notion of things existing in multiple states at once is called quantum superposition (the prefix “super” meant in its “above, over, beyond” sense), and it’s the foundation upon which quantum computing’s promise of insanely fast, classical computer-trouncing probability engines rests. It involves post-digital units of quantum information known as qubits, or quantum bits, which instead of existing in a digital on or off state, can be in superposition, or both states at the same time. If that sounds weird, it’s because it is. Like anything else scrutinized at nanoscopic levels, it defies encapsulation.

Traditional digital computers convey the illusion of binary multitasking by switching rapidly between computational states. Chipmakers like Intel and AMD and IBM have been ratcheting up the stakes in that seesaw-dance for decades, to the point that today’s fastest supercomputer, the $2.4 billion Tianhe-2 located in China and employing Intel’s multicore “3D” processor technology, can crunch an unfathomable 33.86 petaflops, putting it somewhere in the vicinity of what researchers reportedly estimated just a few years ago would be necessary to simulate the human brain.

Quantum computers would be able to perform exponentially greater computational feats still by abandoning on-off calculative constraints as a matter of form — a kind of ultimate parallelism, if you’ll forgive that back-of-the-envelope reduction. Imagine cloning yourself for the sake of performing a task and thus being able to do more than one thing at once, then scale that way up in computational terms. True, practically implementable and sustainable quantum computing is probably where the rubber behind concepts like Ray Kurzweil’s singularity — our looming self-aware machine overlords — meets the road.

But given the challenges involved in getting even the most primitive sort of turtle-slow, experimental quantum computing device up and running — and you can read about some of those challenges here — it’s hard to know what you’re looking at when you see headlines about so-called quantum computing breakthroughs.

Take the latest laboratory advance with potential quantum computing ramifications from two of the foremost quantum-fiddling suspects — MIT and Harvard University — involving light, or more specifically a lattice of photons designed to ensnare atoms and create joint particle “switches” that could, in theory, facilitate quantum computing operations down the road.

Down the road would be the operative phrase here, since the discovery, just published in Nature, sounds more like a stepwise accomplishment in an unfurling cosmology of quantum computing components, some or all of which may (or may not) be instrumental in guiding hands toward fantasy future notions of smartphone- or watch-sized or physiology-embedded computers more powerful and versatile than our own gray matter.

According to MIT News, the MIT/Harvard solution involves pairing a rubidium atom (a metal) with a photon, allowing either particle to affect the quantum state of the other. Call it a “quantum optical switch,” because that’s what the authors of the Nature paper do:

The researchers says that the techniques they’ve been able to experimentally demonstrate in this instance could “pave the way to integrated quantum nanophotonic networks involving multiple atomic nodes connected by guided light.”

Vuletić envisions placing all sorts of atoms in this system to create devices “only a few hundred nanometers thick, 1,000 times thinner than a human hair” which would then exchange information.

“The idea is to combine different things that have different strengths and weaknesses in such a way to generate something new,” said Vuletić (again, speaking to MIT News), though he appends the following cautionary disclaimer, which could serve for all quantum computing advances at this point: “This is an advance in technology. Of course, whether this will be the technology remains to be seen.” 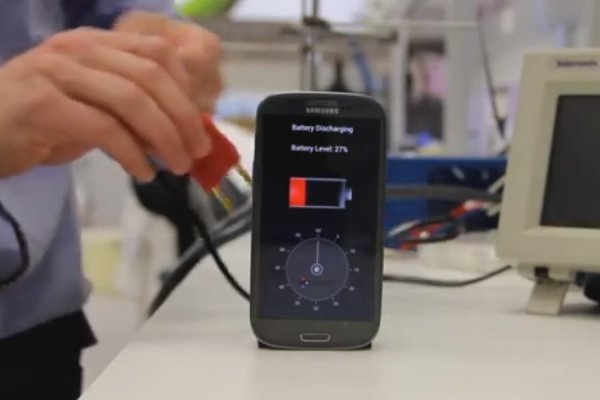 StoreDot: Another Promising, Far-Off Answer to Smartphone Battery Problems
Next Up: Editor's Pick