As President Donald Trump faces another tough week of public testimony in the impeachment inquiry, his push for investigations in Ukraine has found an unexpected support base: Ukrainian lawmakers. In particular, some of the politicians in Ukraine seen as closest to Russia have taken up the call to investigate Trump’s rivals.

Speaking to TIME last week, three of these politicians — including the co-chairman of Ukraine’s biggest pro-Russian party — echoed the call for the two investigations that Trump has urged Ukraine to open. The first would look into the Ukrainian business dealings of Joe Biden’s son Hunter, and the second into whether Ukraine interfered in the 2016 elections to help Hillary Clinton.

“We really need to get clarity on this,” says Yuri Boyko, the co-chairman of Opposition Platform – For Life, the second biggest party in Ukraine’s parliament and a leading proponent of closer ties between Russia and Ukraine. “It happened before our eyes, when the Ukrainian politicians were trying to interfere and give their assessments of the elections in America,” Boyko told TIME. “This happened. We all saw it.”

These allegations came up repeatedly during the impeachment hearings last week. Representative Devin Nunes, the top Republican involved in the inquiry, raised them during his opening remarks on Wednesday. “The Democrats cooperated in Ukrainian election meddling,” Nunes said. “And they defend Hunter Biden’s securing of a lavishly paid position with a corrupt Ukrainian company, all while his father served as Vice President.”

The following day in Kyiv, some of the same accusations issued from the ranks of Boyko’s party. Their entry into this debate raised particular concern among Ukraine’s leaders, who worry that Putin, through his allies in Kyiv, could achieve several goals at once: divert attention from Russia’s own interference in U.S. elections, weaken the alliance between the U.S. and Ukraine, and bolster Republican attacks against Trump’s political rivals.

“For this pro-Russian party, the first thing is to create a split between the United States and Ukraine,” says Bohdan Yaremenko, a senior lawmaker for the ruling party in Ukraine. “We don’t know if this party is fully incorporated into the Russian foreign policy, or just coordinating with them. But we have no doubt this party is linked to Russia.”

Joining the calls for investigations have been two other members of Boyko’s political party: Oleg Voloshyn, who previously worked in Ukraine’s embassy in Moscow, and Nestor Shufrych, a longstanding defender of Russian interests in Ukraine.

In an interview with TIME on Thursday, Voloshyn echoed the Republican talking point that Clinton received help in 2016 from the Ukrainian government. “It was election interference, pure and simple,” he says. “When the liberal media tell me it’s a conspiracy theory, I say, ‘How do you know?’ There has been no investigation. Without an investigation, how can you say that [Ukrainian President Petro] Poroshenko did not help Hillary? I know that he did.”

Current and former advisers to Poroshenko, who was in power from 2014 until this May, have repeatedly dismissed the allegations as absurd. They also warned that, as Trump seeks re-election in 2020, Russia could seek to use its allies in Ukraine to undermine Trump’s rivals.

“Through its puppets in Ukraine, Russia is doing everything it can to keep the focus on this scandal,” Konstantin Eliseev, who served as the top foreign policy adviser to Poroshenko throughout his tenure as President, told TIME on Friday. “Until November of next year, this issue will dominate relations between the U.S. and Ukraine, and that will play into Russia’s hands,” he adds.

Marie Yovanovitch, the former U.S. ambassador to Ukraine, voiced similar concerns during her testimony before the impeachment inquiry on Friday. Ever since U.S. intelligence agencies exposed the Kremlin’s effort in 2016 to help the Trump campaign, President Vladimir Putin has tried to shift blame for election-meddling onto Ukraine. “Classic for an intelligence officer to try to throw off the scent and create an alternative narrative that might get picked up and get some credence,” Yovanovitch said, referring to Putin.

Ukraine’s parliament has long been a rancorous hive of competing interests. Even within political factions, discipline is rare, and internecine struggle is routine. Since 2014, when Russia invaded and annexed parts of Ukraine, none of the organized blocs in parliament have publicly supported Putin. Indeed, when another lawmaker accused Boyko of being a “Kremlin agent” in 2016, Boyko stood up and punched him in the face.

But his party has made no secret of its close relations with Russia. During this year’s presidential race in Ukraine, Boyko was the only major candidate to pay an official visit to Moscow, where he met in March with two of Putin’s closest associates. Joining him on that trip was the other co-chairman of Boyko’s political party, Viktor Medvedchuk, who is a personal friend of Putin. The two men are so close that Putin is the godfather of Medvedchuk’s teenage daughter. In 2014, when the Kremlin-backed regime in Ukraine was overthrown in a popular uprising, most of its key leaders fled to Russia. But Boyko, who served as the Vice Premier under that regime, stayed behind to rally what remained of its electorate.

He’s had remarkable success. His party came in second place during parliamentary elections held in July, taking about 13% of the vote. But under Ukrainian law, Boyko’s faction does not have nearly enough seats to open a parliamentary investigation, which requires the support of a third of the chamber. The most that its lawmakers can do is apply public pressure for the government to start investigations.

Ukrainian parliamentarians began that campaign in September, soon after a whistleblower accused Trump of trying to strong-arm Ukraine into opening these same investigations. By early October, when a second whistleblower came forward to support those allegations, politicians in Ukraine ramped up their calls to investigate Trump’s rivals.

Initially the most vocal advocates were not members of Boyko’s party. The first was Andriy Derkach, an independent lawmaker, who came forward on Oct. 9 with documents appearing to show how much Burisma paid four of its board members, including Hunter Biden. These payments, amounting to over $16 million, were neither secret nor illegal. But Derkach painted them as part of a sinister plot involving Ukraine’s former President.

“International corruption of this magnitude, as well as interference in the U.S. presidential election, could not have occurred without Poroshenko’s participation,” he told a press conference in Kyiv on Oct. 9.

on Oct. 9. Though Derkach is not affiliated with any political party, his critics in parliament have pointed out that Derkach studied in the early 1990s at Russia’s top intelligence academy. Derkach did not respond to interview requests from TIME.

The day after the press conference, the Wall Street Journal published an op-ed by another Ukrainian lawmaker, former intelligence chief Valentyn Nalyvaichenko, who has been affiliated with three political parties during his long career, all of them firmly opposed to Moscow. “It isn’t clear whether Ukrainian officials meddled in the American election, but Parliament must find out,” he wrote on Oct. 10. “We also do not know if Hunter Biden was complicit in Burisma’s alleged corruption, or why he was appointed to the board of a Ukrainian company.” But it is “imperative for our country and our place in global society” to investigate the matter, wrote Nalyvaichenko.

Ukrainian officials have repeatedly dismissed claims of wrongdoing against the Bidens. “Ukraine has no legal claims against Biden or his son,” Anton Gerashenko, a deputy head of the Interior Ministry, which oversees the national police, told TIME on Friday. “None,” he added.

Separately, Ukraine’s top law enforcement official confirmed earlier this month that the company where Hunter Biden worked is not under investigation. “There is no Burisma case,” Prosecutor General Ruslan Ryaboshapka told a local news outlet. “It exists only in the mind of the person who made it up.”

Derkach issued another statement about the Bidens on Nov. 11, as the impeachment inquiry prepared to hold its first public hearings. Again the lawmaker presented fresh documents that appeared to show the payments from Burisma to Hunter Biden, reportedly amounting to $50,000 per week.

“I give you new facts of international corruption, in which senior officials of Ukraine and the United States are involved,” Derkach said in a lengthy statement in English posted that day on his website, which featured leaked documents and discredited allegations against the Bidens and Poroshenko.

These recycled claims from Derkach did not attract much attention in Ukraine or elsewhere. But as similar calls began to come this week from Boyko and members of his party, other lawmakers in Kyiv grew more alarmed. “Russia will use any opportunity to promote its interests,” says Inna Sovsun, a member of parliament for the liberal Golos party. And these calls for investigations from Russia’s allies in Ukraine, she says, create an opportunity for the Kremlin. “I have no doubt that Putin will use it.” 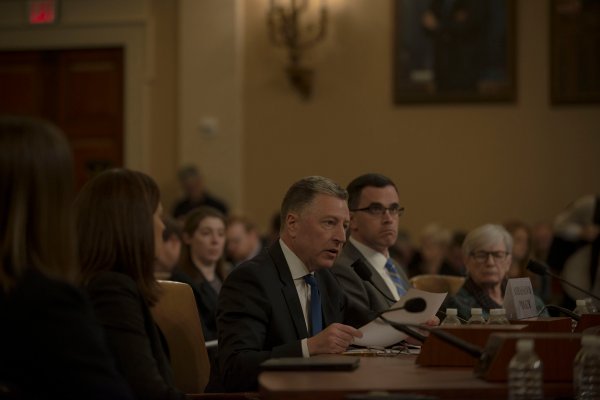 What Officials Said During Tuesday's House Hearings
Next Up: Editor's Pick