By Sanya Mansoor and Suyin Haynes

Prince Andrew’s recent attempts to clarify his relationship with Jeffrey Epstein have backfired, sparking even more criticism in both the U.K. and the U.S. about his lack of remorse about the wealthy financier’s actions. Epstein died in August in an apparent suicide in a federal jail after being charged with sex trafficking involving minors.

Prince Andrew was grilled by journalist Emily Maitlis in a BBC interview broadcast Saturday on his alleged friendship with Epstein. Multiple photographs showing Andrew and Epstein together on different occasions have previously surfaced, raising questions about how close the two were.

Maitlis asked whether the prince regretted his relationship with Epstein. Andrew said he didn’t, explaining that, “the people that I met and the opportunities that I was given to learn either by him or because of him were actually very useful.” He added that he and Epstein were not “that close.”

Prince Andrew also acknowledged during the BBC interview that he had been on Epstein’s private plane and private island and that Epstein was his guest at Windsor Castle and Sandringham, which the interviewer said showed that he was “brought right into the heart of the royal family.”

Maitlis also pressed the prince on why he stayed at Epstein’s mansion in New York for several days in 2010 after Epstein was convicted of soliciting prostitution from a minor, even as he said the purpose of the trip was to cut ties with the wealthy financier. Andrew sighed before saying that “it was a convenient place to stay.” He admitted that he did regret the trip but not the whole relationship.

Andrew has repeatedly denied allegations about him made by Virginia Roberts Giuffre, who said she was trafficked by Epstein, and that the prince had sex with her when she was 17 years old. Giuffre has said, Giuffre has said, in court documents she filed in a 2015 libel suit she brought against Epstein’s former girlfriend and longtime friend Ghislaine Maxwell, that she had been ordered to have sex with Andrew by Maxwell. Earlier this year, she said about Prince Andrew that “he knows exactly what he’s done and I hope he comes clean about it.”

Asked about Giuffre during the BBC interview, Prince Andrew responded: “I have no recollection of ever meeting this lady.”

He said that “if push came to shove” and legal advice recommended he testify or give a statement under oath, that he would do so. “I think there’s just as much closure for me as there is for everybody else,” he said.

Prince Andrew also said he let the royal family down by meeting Epstein even after he was convicted of soliciting a minor. “I kick myself for, on a daily basis, because it was not something that was becoming of a member of the royal family,” he said. “And we try and uphold the highest standards and practices and I let the side down, simple as that.”

Prince Andrew’s interview has sparked significant backlash on both sides of the Atlantic. Several royal commentators and PR experts have described it as a “car crash,” and believe that the prince’s reputation was “severely damaged” by his lack of apology or remorse. Catherine Mayer, biographer of Prince Charles and co-founder of the Women’s Equality Party, said that Prince Andrew’s interview “entirely erased the victims” and that the interview revealed that “he saw himself as the victim.” Mayer also called for charities associated with the prince to reconsider their ties with him.

However, sources have told the BBC that the prince stands by his comments and wanted to speak about his involvement with Epstein with “honesty and humility.” The prince was reportedly so pleased with the outcome of the interview that he gave the BBC interview team a tour of Buckingham Palace afterwards. Writing in the Times newspaper after the interview aired, presenter Maitlis suggested that Prince Andrew had also been given the Queen’s approval for the interview, although a report from the Telegraph has disputed this, saying the prince’s team was “operating in a silo.”

Lawyers for several of Epstein’s alleged victims have also condemned the prince’s interview. Speaking to the BBC, Florida-based lawyer Spencer Kuvin said that “royalty has failed” the victims, saying “it was depressing that he [Prince Andrew] really did not acknowledge the breadth of his friendship with this despicable man and apologize.” Speaking to the Guardian, high-profile lawyer Gloria Allred, who is representing five of Epstein’s alleged victims, said “the right and honorable action for Prince Andrew to take now is for him to volunteer to be interviewed by the FBI and prosecutors for the Southern District of New York.” Federal prosecutors in New York continue to investigate sex-trafficking allegations against Epstein despite his death. 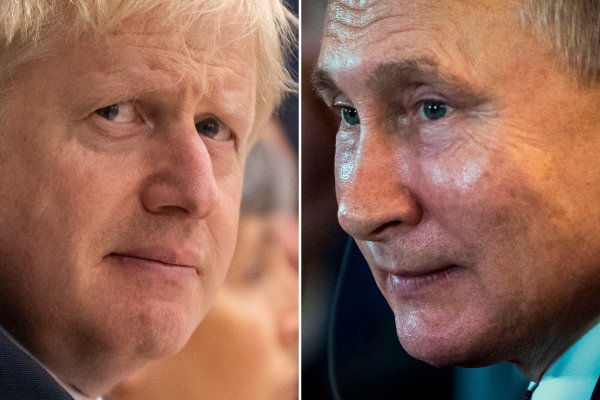 'It's Classified.' Boris Johnson Faces Calls to Release Secret Report on Russian Interference Ahead Of Election
Next Up: Editor's Pick