After Deaths of 9 Students, USC Is Opening a New Psychiatric Clinic

Nine students have died at the University of Southern California (USC) this semester, causing alarm on campus and leading students to demand more mental health resources. Now, USC officials say they will open a new psychiatric clinic on Monday.

Dr. Steven Siegel, chairman of the USC psychiatry department, tells TIME the project has been in the works for a few years, and wasn’t in response to the student deaths. “It turns out that all of this attention is on USC this week, and the clinic is opening, but that timeline is not related,” he said Friday.

It comes as students say they have long had trouble accessing mental health care at one of the wealthiest universities in the country, where tuition tops $57,000 and the endowment was $5.5 billion as of June 2018. Three students died by suicide this semester, the school said, and the causes of some of the other deaths have not been publicly confirmed.

Schools across the country have struggled to meet an unprecedented student demand for mental health services on campus, as rates of anxiety and depression among college students have continued to increase in recent years. Between 2009 and 2015, the number of students visiting campus counseling centers increased by about 30% on average, while college enrollment grew by less than 6%, the Center for Collegiate Mental Health found in a 2015 report.

Some universities have opened up satellite counseling clinics above a local Starbucks or in the athletic department to reach more students. Some have allocated more money to counseling services and hired more therapists. Others have rolled out a counseling mobile app or a free online screening for depression.

USC senior Claire Redlaczyk, 21, attended the forum and talked about the challenge of accessing therapy after her father died in February of her freshman year. That semester, Redlaczyk says she met with a therapist in the university’s counseling center during eight one-hour sessions that she found helpful as she struggled with grief. When she tried to continue the counseling the following school year, “still grieving very heavily,” staff told her that the center couldn’t offer her any more therapy sessions and directed her to a grief support group.

“That was something I really wanted as a sophomore. I remember I was on the phone with the counseling center just crying and begging them to take me, and they were just like, ‘You can go off-campus.’ I was devastated,” Redlaczyk says. “It’s just not very feasible for me to go to therapy off campus. It’s expensive. I don’t have a car. It’s far away, so I just ended up not continuing any therapy after that.”

In a letter to the USC community on Saturday, university officials called the recent student deaths “devastating and heartbreaking” and sought to dispel rumors about how many students had died by suicide. Suicide is the second leading cause of death among college students. And tight-knit communities, including college campuses, can sometimes experience suicide contagion, a phenomenon in which exposure to suicide can result in suicidal behavior in others.

“People are searching for answers and information as we attempt to make sense of these terrible losses. There is a great deal of speculation about the causes of these deaths and most are being attributed to suicide. This is not correct,” they said in the letter. “These tragic losses have resulted from a number of different causes. In some cases the cause of death is still undetermined, and in others the loved ones do not want details disclosed.”

USC President Carol Folt told The Los Angeles Times that police are now investigating drug overdoses as a potential cause of some of the deaths. The Times also reported that investigators are exploring whether tainted drugs played a role, though that has not been confirmed as a cause of death, and many autopsies and toxicology reports are still pending. In a video interview with Annenberg Media on Monday, USC’s Chief Health Officer Sarah Van Orman said there are between four and 15 student deaths in a typical academic year.

But the fact that even three of the deaths have been suicides has led students to call for better preventative mental health services.

“We will do more. We’re doing more,” Siegel says. “But we’re not super humans. We don’t read minds. We’re not ever-present, omnipotent forces that can promise you we’re going to stop bad things from happening.”

USC junior Maxwell Pickenpaugh, who uses they/them pronouns, says they would like USC officials to be more transparent about student tragedy and the challenge of addressing mental health on campus. “A lot of us feel really upset with the whole situation,” Pickenpaugh says.

Pickenpaugh, 21, says they have struggled to receive mental health care at USC after being treated for bipolar disorder in high school. When Pickenpaugh contacted the USC counseling center during their freshman year, they say they were told that bipolar disorder was “too long-term of an illness to be treated at USC health center.” Pickenpaugh met with a USC counselor to get recommendations for off-campus care, but it took a month to get that appointment. The USC counselor recommended and helped Pickenpaugh reach out to a handful of outside mental health clinics and therapists, but then never followed up to check in, Pickenpaugh says. And none of the off-campus therapists ever responded.

“I felt really discouraged, and absolutely like, ‘OK, USC just does not care about my mental health.’ It was really hard,” Pickenpaugh says. “I just continued to struggle by myself for a while, really leaning on my family and my friends to help me through it.”

Pickenpaugh says it took nearly two years to find a therapist who would accept their health insurance and charge prices they could afford.

USC’s new psychiatry clinic is aimed at helping students like Pickenpaugh, who had not previously heard about the initiative, but thinks it’s a step in the right direction. “We recognize that the real barrier we have is getting people into longer-term care after they’ve seen student health,” Siegel says.

“The counseling system here and elsewhere is not built or intended—at any college—to be the entire mental health system for the population. It’s a piece of the mental health system. And so what those students are hearing is, ‘We’ve done the part that we think is best done here. We think you need more than that, and so now we need to move you to an environment that can provide the kind of ‘more’ that you need.’”

Siegel says the new clinic will be able to serve 2,500 students annually — which would cut in half the number of off-campus referrals counselors need to make.

He says the university is doing what it can to address its own “microcosm” of a national problem with insufficient access to mental health care. But many students see it as a problem of misplaced priorities.

“What I’ve discovered is that USC puts so much money into so many things that are for image,” says Sabine Bajakian, 22, who graduated in May from the USC School of Cinematic Arts, where two of the students who died were enrolled.

“But they won’t really do anything for the counseling center. I don’t know where my tuition is going really,” she says, referencing a $700 million residential and retail complex the university opened in 2017. “Why aren’t there enough counselors?”

He and a university spokesperson declined to say how much money the university spent to build and staff the new psychiatry clinic. But by the time it is fully staffed next summer, it will have an additional six psychiatrists and 12 therapists—a step toward providing better mental health care to more of the nearly 50,000 students on USC’s campus.

“With how high our tuition is,” Redlaczyk says, “any student should be able to see a therapist.” 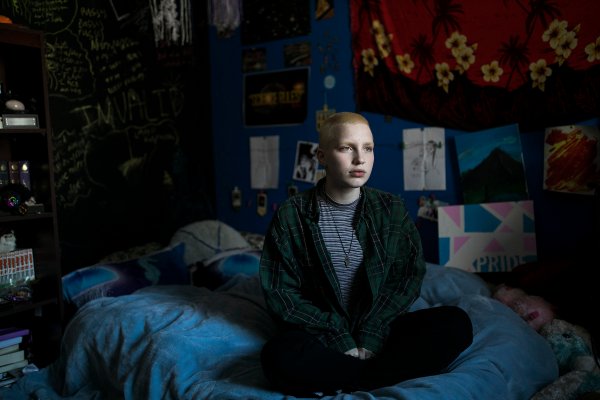 Teachers Are Clashing With Schools Over Their Trans Students
Next Up: Editor's Pick