'It's Classified.' Boris Johnson Faces Calls to Release Secret Report on Russian Interference Ahead Of Election

Boris Johnson said Friday that there was “no evidence” of Russian interference in British politics, just days after his government effectively blocked the publication of a secret report on the subject until after the U.K.’s upcoming general election.

Johnson is facing calls to release the classified 50-page report before the election, scheduled for Dec. 12. But he brushed off concerns on Friday that the delay was political, saying “normal procedures” were being followed.

“I cannot accept his explanation on this at all,” Dominic Grieve, the (now former) chair of the committee which produced the report, told TIME on Friday. “My committee produced a report. He chose not to publish it. And his explanations for not publishing it are in my view entirely untenable. But I’m not, I’m afraid, going to comment on the content of the report because I’m not allowed to. It’s classified.”

Grieve’s Intelligence and Security Committee (ISC) met in secret, and was examining evidence of Russian interference in U.K. politics. The committee submitted its report to Johnson (who as Prime Minister must sign off on its publication) on Oct. 17, after it was approved for release by the U.K.’s intelligence agencies.

Part of the report’s remit was Russian activities during the 2016 Brexit referendum. Johnson was a leading figure on the winning “leave” side in that referendum. (Grieve, a former U.K. attorney general who was expelled from Johnson’s Conservative Party over disagreements on Brexit, is running in the upcoming election as an independent lawmaker instead.)

Johnson has said that the report’s delay is standard procedure. “I see absolutely no reason to change the normal procedures for publishing ISC reports just because there’s an election… They’re not normally published at that pace,” he said Friday. Asked by the BBC if he had anything to hide, Johnson responded “absolutely not.”

But Grieve hit back at these claims to TIME. “That’s simply not correct,” Grieve told TIME in response to Johnson’s interview. “Our report was ready by late March. It [then went] through a process of scrutiny and redaction carried out with the cooperation of the intelligence agencies and the national security secretariat to make it fit for publication without endangering national security. And that process was finished in October … The sign-off [by the Prime Minister] is essentially a formality.”

“I cannot accept his explanation on this at all,” Grieve continued. “However on the question as to the contents of the report, I’m afraid it’s classified and I will not comment on what the report says.”

The U.K. has had no Mueller-style inquiry into Russian interference in the Brexit referendum, but lawmakers, activists and some intelligence officials say there is reason to believe Russia intervened to support Johnson’s campaign on the “leave” side.

“This is the report that would be telling us the actual scale of Russian interference,” Kyle Taylor, the director of Fair Vote, a campaign pushing for an independent inquiry into the Brexit referendum, told TIME on Nov. 4. “But if you look at Mueller’s report, you think, ok, there’s obviously a level of similarity in the tactics and the objective. Russia’s ultimate objective in Europe is breaking up the E.U., which increases their power relative to other nations. If Russia can get the E.U. to be less cohesive, Russia can play a bigger part. Getting the U.K. out was the first opportunity.”

Those fears have been supported by piecemeal official reports on Russian meddling in U.K. politics. One report released earlier this year by the U.K. parliamentary committee on disinformation said there was “strong evidence” that Russia and other foreign actors have attempted to influence U.K. politics in the past. That report referenced “significant numbers” of articles published by Kremlin-aligned media and promoted on social media during the Brexit referendum, many of which had a “clear anti-E.U. bias.”

The chair of that committee, the Conservative lawmaker Damian Collins, was outspoken about Britain’s vulnerability to Russian interference at the time of the report’s release in February. “We know that Russian agencies were involved in using Twitter to try and spread messages during the Brexit referendum,” he told NPR in 2018. “For all democracies, there’s an urgency to actually uncover what’s been going on,” he said.

In June, Collins declared his support for Johnson in the race to become Prime Minister.

Asked by TIME on Friday to comment on the delay to the Russian interference report, a spokesperson for Collins said: “He hasn’t seen the [ISC] report, he’s not privy to the government’s discussions on it, and he looks forward to seeing the report when it’s published.” Pressed on whether Collins had more to add on Britain’s democracy being vulnerable to foreign actors, the spokesperson declined to comment further. 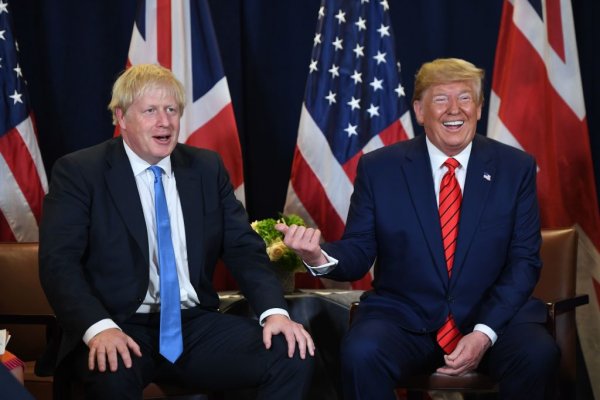 Why President Trump Is Playing a Surprising Role in Britain's Upcoming Election
Next Up: Editor's Pick