The circumstances of Bolivian President Evo Morales’s resignation Nov. 10 have sparked fierce international debate this week. But whether you believe the leftwing leader was forced out by a thinly veiled military coup, or that he resigned in disgrace after a popular revolt over election fraud—or that both could be true—there’s one man who bears much of the responsibility.

Luis Fernando Camacho quickly emerged as the leader of the anti-Morales protests that wracked Bolivia for three weeks following the country’s Oct. 20 election. International election observers from the Organization of American States say Morales tampered with vote tallies to avoid a run-off vote and claim a fourth presidential term outright.

A 40-year-old lawyer from the eastern province of Santa Cruz, Camacho centered his campaign on a desire to “bring the Bible back to the palace of government”—a promise he fulfilled literally when he hand-delivered a Bible to the presidential palace in downtown La Paz on Nov. 11, along with a Bolivian flag and a resignation letter he wanted Morales to sign.

The protest leader’s foregrounding of his Catholic faith, and his roots in a right-leaning region of Bolivia, have led some Latin American media outlets to dub Camacho “the Bolivian Bolsonaro,” in reference to Brazilian President Jair Bolsonaro, a far-right provocateur with a political base of evangelical Christians.

But unlike the Brazilian president, who was a lawmaker before being elected president in October 2018, Camacho is a regional activist who holds no position in the national government. Additionally, though he rails against the leftwing party that controls Bolivia—often with incendiary language—he did not espouse far-right policies during the protests. He focused instead on promoting Catholicism and uniting Bolivians against what he called “the dictatorial tyranny of Morales.”

“He’s managed to build a radical movement, entirely around opposition to Evo—anti-Evismo,” says Marcelo Arequipa, a political science professor at the Catholic University of Bolivia. “Everything that’s being done right now, the whole political agenda [Bolivia’s new government] is pushing right now is the agenda of Camacho.”

With Bolivia’s interim president Jeanine Añez promising fresh elections within 90 days, here’s what to know about Luis Fernando Camacho and his anti-Morales movement.

Why were Bolivians protesting?

Bolivia’s presidential elections in October were the tightest presidential race in the country since Morales first came to power in 2006. The vote count initially showed Morales with just under the 10-point lead he needed to avoid a second-round run-off with his centrist challenger Carlos Mesa. But electoral authorities abruptly paused the count for 24 hours. When it re-started, Morales led by just over 10 points.

While Morales claimed victory, Mesa cried foul play and immediately called for the second round to go ahead.

But Camacho went further, arguing that Morales should resign for clear authoritarian overstep—a claim bolstered by the fact that, by running for a fourth term in the first place, the president was already defying the result of a 2016 referendum in which voters refused to abolish term limits for him.

Who is Luis Fernando Camacho?

A few months ago, Camacho was barely known outside of the eastern region of Santa Cruz, where he is the president of the Comité pro Santa Cruz, a powerful civic organization that groups together businesses, unions and neighborhood associations. The group says its aim is to “watch out for the moral and material improvement” of the region and the country.

There has long been a deep political divide between the two geographical halves of Bolivia. Santa Cruz is the country’s wealthiest region and a bastion of opposition to Morales and his Movement for Socialism (MAS). MAS’s support base lies in the west of Bolivia, which his home to most of the country’s indigenous population.

Camacho has been combining advocacy for his region with railing against Morales’ government for months. In early summer he coordinated strikes to protest the decision of Bolivia’s election board to allow Morales to run for fourth term. In August, as wildfires raged in eastern Bolivia, Camacho blamed the blazes on a law recently passed by Morales’s administration allowing slash-and-burn farming. Camacho was referring to Morales as “a dictator” on social media even before the alleged fraud in the October election.

Camacho’s fierce critique of Morales, stronger than that of Mesa who initially dismissed calls for his opponent’s early resignation, has found support in a country that is bitterly divided over their leader, Arequipa, the Catholic University professor, says. “In an atmosphere of polarization like what we have today, it’s a radical message, not a centrist one, that becomes most powerful.”

How did Catholicism play a role in Bolivia’s protests?

Before Morales came to power in 2006, Catholicism—which is practiced by around 75% of the population according to a September poll—played a large role in Bolivian public life. Bolivia was officially Catholic and government officials all swore oaths on the Bible and fealty “to God and country” until 2009, when Morales’ government approved a new constitution. The constitution turned Bolivia into a secular state, with no official religion, in an effort to prevent discrimination against Bolivia’s indigenous cultures.

Restoring the status of Catholicism became a rallying cry for Camacho and Morales opponents, Arequipa says. “Camacho has used the Bible like a symbol of these protests, as if he wanted to introduce the idea that Bolivia was no longer a secular state but a Catholic state again,” according to the professor. Camacho regularly brandished a Bible and invoked the “Almighty” at rallies.

A week before Morales resigned, Comacho announced he was traveling from Santa Cruz to the capital La Paz, telling a large crowd of supporters, “I’m not going with weapons, I’m going with my faith and my hope; with a Bible in my right hand and a resignation letter [for Morales] in my left hand.” He promised he wouldn’t come home until he’d delivered them. After Morales stepped down on Sunday, and the army said it would not oppose the anti-Morales protesters, Comacho managed to enter the main hall of the presidential palace. A widely-circulated photo shows him kneeling over the Bible, atop a Bolivian flag.

Añez, the interim president, is herself a conservative Catholic and she echoed Camacho’s invocation of religion, using a Bible at her swearing in ceremony Tuesday and telling the crowd, “God has allowed the Bible to come back into the palace. May he bless us.”

On Wednesday, Añez announced a new cabinet including several politicians from Santa Cruz, along with Camacho’s personal lawyer.

Parties have yet to announce candidates for upcoming elections and a final date has not been set—though Añez must announce one within 90 days of taking the presidency, per Bolivia’s constitution.

Añez has said Morales will not be able to run and told the BBC Thursday that he should face prosecution for electoral fraud if he returns to Bolivia from exile in Mexico.

Camacho has previously said that ousting Morales was his political goal and that he doesn’t plan to run for office. But Arequipa says it’s “doubtful that he wouldn’t want to use the political capital he’s built up” over the last few weeks. “It’s too early to say, but I’m inclined to believe that he likely will present himself as a candidate [of a rightwing party.]”

But MAS still has a good chance of success—if the party can overcome the challenges of Morales’s legacy. “For a long time inside the left, it’s been taboo to talk about a time when Morales wasn’t in power,” making it hard for new projects and leaders to emerge, Arequipa says. “If they manage to organize around a new candidate and reinvigorate themselves, they’ll be able to win again.” 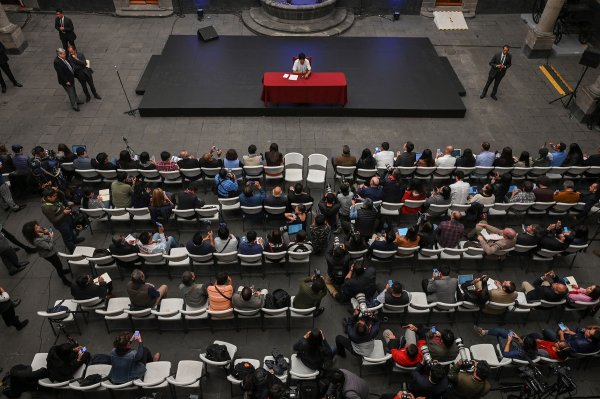 What the End of Bolivia’s President Means for the Country
Next Up: Editor's Pick