T.C. usually spends his lunch break eating in one of the many restaurants near his office with his law-firm colleagues, chatting casually about the cases they’re working on. But lately, he’s been skipping lunch altogether to join hundreds of other office workers in protests in Hong Kong’s financial district, where midday, flash-mob style demonstrations have brought the business hub to a standstill every day this week.

The lanky 22-year-old lawyer is hard at work overturning garbage cans onto a major road that skirts Central, as the financial quarter is called, when he stops to talk to TIME. He’s dressed for the office in black suit pants and a blue collared shirt, but a black t-shirt is wrapped around his face as a makeshift balaclava to hide his identity, and he has donned a pair of safety goggles, of the kind normally used by construction workers.

“We want to block the roads to stop the police from coming in, so they can’t get to the office workers,” he tells TIME. “Usually people coming from the office don’t have gear with them,” he says, referring to gas masks, goggles, helmets and umbrellas Hong Kong protesters use to shield themselves from tear gas and rubber bullets.

He says that protesting as a professional is complicated. “I’m worried about getting arrested,” he says. “If I get convicted, I could get disbarred.”

He has attended several peaceful anti-government rallies over the last few months, but he’s been particularly inspired to take to the streets since last Friday morning, when a university student died from injuries sustained after falling from height near an area where police were conducting a dispersal operation.

Circumstances around the student’s death remain unclear, but many have hailed him as a martyr, and on Monday, enraged protesters shifted their demonstrations—which have gripped various neighborhoods of the restive territory for 23 straight weekends—to weekdays in the heart of the third most competitive financial center in the world, with the aim of drawing more attention to their cause.

Not everyone in his office is on the side of the protesters. “My colleagues are pro-government, so it’s very weird,” T.C. says. “After lunch I have to go back and pretend everything is normal, that nothing happened.”

He pulls his expensive watch out of his pants pocket—where he’s stashed it so it doesn’t get scratched while he builds barricades—to check the time. Noticing that the end of his lunch hour is drawing close, he pulls a tissue out of his other pocket and begins brushing off his suit and shoes. “It’s just dirt, I can clean it off,” he says. “I have a jacket in my office that I’ll put on as soon as I get back to hide it.”

He’s not the only office worker trying to hide his lunchtime activities this week.

Luka, who works for a Chinese bank, spends her Thursday chanting slogans like “Fight for freedom! Stand with Hong Kong!” as she marches through the finance mecca with her fellow protesters, some who are still wearing company ID cards on lanyards around their necks. It is no easy feat for the 27-year-old to navigate the bricks and detritus littering the streets in her dress and high-heels, but she says she couldn’t change her footwear.

“I don’t think my colleagues would agree that I left work to come here,” she tells TIME as she teeters around a pile of dirt dumped out in the middle of the road, a Chanel handbag slung over her right shoulder. “I left my heels on so I can just take off the mask and be a normal worker again,” she says. “I cannot bring things with me or [my colleagues] will know.”

Some other finance workers haven’t managed to stay under the radar. A Citibank investment banker was reportedly arrested this week, according to Bloomberg. “We are aware of this incident and are investigating further and it would be inappropriate to comment further while investigations continue,” a spokesman for Citi in Asia told TIME.

A man yells at police during a protest in Hong Kong's Central district on November 11, 2019.
ANTHONY WALLACE—AFP via Getty Images

‘The end of this is nowhere in sight’

The rallies, weaving in between the city’s glistening office towers, have made meanwhile made it difficult to get business done.

“The disruption can’t be ignored, it’s very clear, either to productivity—you’re not really going to feel like trading when there’s so much going on out the window—or your ability to make it to meetings when the transport system is crippled,” Benjamin Quinlan, CEO and Managing Partner of independent strategy consultancy Quinlan & Associates, tells TIME.

Several major firms enacted business continuity plans to keep their workers out of harm’s way. “Employees are encouraged to work remotely, where practical,” HSBC, which employs about 30,000 people in Hong Kong, told its staff in an email this week.

“The office has been extremely quiet this week and somber in a way,” an American employee at a major international law firm based in Central, who asked not to be named, told TIME. A number of events and trips by overseas staff were cancelled this week, she says. “We even had to move a regional meeting to another office in Asia due to potential safety issues.”

The action has non-protesters who work in the area on edge.

“It was pretty scary walking through the streets among the protesters,” an expatriate lawyer at another international law firm, who asked for her name not to be used, told TIME. “Hearing the protesters and the tear gas being fired has been quite upsetting.”

“Working at an international firm means clients expect the same level of client service and delivery times from you, which is difficult when you’re unsure whether you need to evacuate the building at short or no notice,” she adds.

Protests, which have convulsed Hong Kong since early June, have hit the economy hard. September tourist arrivals dropped 34% from the same month in 2018, and hotel room occupancy across the enclave stood at only 63%. With tourists avoiding the city, transport frequently paralyzed, and shops and restaurants shuttered during protests, the territory plunged into recession in the third quarter, according to official date released at the end of October.

Corporations are now thinking hard about if it makes sense to keep doing business in Hong Kong.

“I don’t think anyone has actually made a decision to shift operations—the major firms haven’t,” Quinlan says. But, “there is a recognition now that the end of this is nowhere in sight, so people are being realistic around what that means for headcount, staffing and where to conduct their business.”

Despite the Hong Kong government efforts to cast the protests as a fringe movement of “rioters” and “radicals”—the city’s embattled leader Carrie Lam said in an August address that protesters “have no stake in the society…and that’s why they resort to all this violence and obstruction, causing huge damage to the economy”—people from a wide-cross section of society have been gathering in the streets of the financial district to show their support for the anti-government movement. And it’s not just young firebrands resorting to extreme measures to get their message heard.

“I want to let the government to know that educated people, people with financial stability, people who have a future, are standing with the younger generation,” Will, a banker, tells TIME.

The bespectacled 29-year-old is breathless from pushing an industrial-sized garbage bin into the middle of a highway, in the hopes of stopping traffic, in front of a skyscraper which houses J.P. Morgan’s regional headquarters and several other financial firms, when he stops to talk to TIME.

He normally goes to the gym during lunch, but he says giving up his lunch hour to be here is a minor sacrifice. “It’s nothing compared to what the students do for us,” he says. “It’s so heartbreaking to see the young generation fighting this battle.”

He has to be back in the office for a 3 p.m. conference call, but before then, he says he’ll do what he can to help the cause. He puts on a pair of bright orange 3M work gloves—which look out of place paired with his well-tailored pastel pink button-down shirt, navy slacks and brown Oxford loafers—and starts digging bricks, which will be used to build roadblocks, out of a nearby sidewalk.

The protests on the doorstep of some of the world’s largest banks certainly has the the finance industry talking.

“I think before this week, it was just something that was occurring over there, but now it’s on [Hong Kong Island] and so disruptive to life and work that it’s the number one talked about topic,” an expatriate banker at an international investment bank, who asked for his name not to be used, told TIME. From one of the shiny high-rises dotting Hong Kong’s impressive skyline, he’s had a bird’s eye view of riot police and protesters facing off from his desk. “It’s like a film,” he says.

The banker says that with protests hitting so close to home this week, he’s started to worry about his family’s safety.

“Expats with the ability to leave …very senior bankers are saying, ‘if this doesn’t settle by Q1, we’re going to implement plan B,’” Quinlan says.

But others say they will fight for democracy for their hometown until the bitter end.

As Thursday lunch hour comes to a close, T.C. pulls his watch from his pocket one more time and decides he needs to head back to the office. He has work to get done that afternoon, but he promises to return to the streets as soon as he can.

As he turns to make the short walk back to the office he says: “I will keep on fighting, until we succeed or until we all die.” 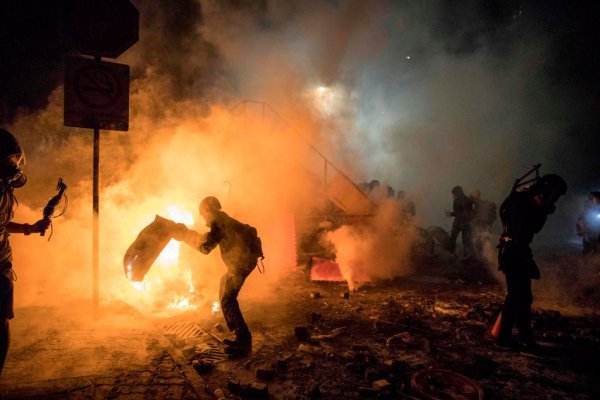