Watching Lili Reinhart is watching a star on the rise. She not only stars in the hit CW show Riverdale — now in its fourth season — but also appeared in 2019’s hit film Hustlers, acting alongside the likes of Jennifer Lopez, Constance Wu, Cardi B and fellow TIME 100 Next honoree Keke Palmer.

So of course we had to touch base with the actor during the cocktail hour to talk about her next move. In 2020, she will star and executive produce the upcoming film Chemical Hearts, based on the 2016 novel by the same name.

“That was so cool for me. And it’s just like a real drama, and I’m stoked for people to see me in this purely raw and dramatic role in a film for the first time,” Reinhart told TIME. As for why she was ready to produce, just look to the stars. “I mean I’m a Virgo I like to have control! I like creative control.”

And she has shown no signs of giving up creative control.

“When you’re on a show for X amount of years you feel like you want to do something that you’re in control of. And so that made me, you know, want to write my poetry book that I wrote, and that made me want to really kind of develop a script from the ground up,” she said.

“I like to keep it interesting. I’m very particular about the things I want to work on,” she continued about her career choices, one of which includes working alongside J Lo who stood out to her for her work ethic.

“She’s wonderful, she’s such a hard worker. She really is a bad ass,” Reinhart.

Reinhart also gets to work with her Riverdale co-star and boyfriend Cole Sprouse. “I think we’re lucky that we get to work together now, because most people don’t get to work with their significant other. So I’m very appreciative of it,” she said. “But I think it’s also really good to also do your own thing,” she continued. “When I saw his movie Five Feet Apart, that was so cool for me to see something that he was a part of completely on his own, that I had nothing to do with, so I could watch more so as an admirer.“

But Reinhart’s also made headlines for how she uses her platform. She’s a vocal advocate for body positivity, and openly speaks about her struggles with anxiety and depression.

“I think the most I can do right now is be supportive and be vocal about the fact that people come in all shapes and sizes,” she said. “Supporting women who talk about it and who show their bodies naturally.“

This year Reinhart was chosen for the TIME 100 Next list, an expansion of the TIME 100 franchise that spotlights 100 rising stars who are shaping the future of their fields— from business to entertainment, sports, politics and beyond.

When asked about who influences her, Reinhart pointed to her Riverdale castmates. “Camila, Cole, KJ, Casey… they’ve helped me grow as a human being a lot, probably without even realizing it. I’ve changed a lot over the past years being on the show. They’ve encouraged me to go out of my comfort zone and just, you know, be a 20-year-old.” 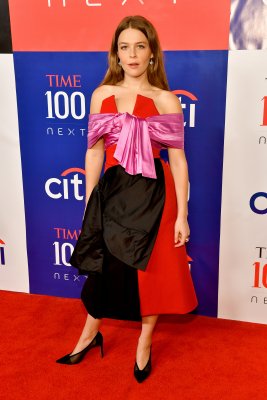 Maggie Rogers Brings Genre-Bending Performance to TIME 100 Next Event
Next Up: Editor's Pick