It was impossible to move an inch at the 2019 TIME 100 Next event without breezing past someone who is sure to have influence well beyond 2019.

The celebration, which recognized people who are shaping the future of their fields, brought together some of the year’s most buzzy individuals from athlete and activist Aly Raisman, to Costa Rican President Carlos Alvarado Quesada, to talk show hosts Desus and Mero.

If the annual TIME 100 gala is the biggest cross-discipline party, then the TIME 100 Next event is a preview of what (and who) is coming next. Where else would the likes of Lili Reinhart and Miami Mayor Francis Suarez convene to raise a glass to the future?

Before the evening could end, Camila Cabello got everyone on their feet for a rendition of “Señorita.”

Relive the night below with the biggest moments at the inaugural TIME 100 Next event.

Maggie Rogers knows how to put on a show

Catharsis was in the air as soon as TIME CEO and Editor-in-Chief Edward Felsenthal introduced Maggie Rogers, who enlivened the proceedings with a rendition of “On + Off” and “Light On.”

Awkwafina has become a champion of inclusion, but when TIME’s Charlotte Alter asked her about breaking down stereotypes, she gave a no-holds-barred answer.

“So I’ve spent a lot of my life absolutely shattering them, not actively, but literally just by existing,” she said. “When I walk into those rooms they hear my voice, and are like ‘what kind of voice is that?’” the Hustlers star said.

Costa Rica President Carlos Alvarado Quesada joined TIME’s Justin Worland in a wide-ranging conversation about the environment and his country’s world-leading approach to fighting climate change. The driving force? His family. “We’re going to promote change now so I can look at [my son] in the eye and say, I did the best,” he said during the Q&A. “And actually I managed to not make this a problem for your future. So that’s the inspiration. It’s the one I love. It’s my kid.”

“Justice matters and so does today and so does tomorrow,” Raisman told her fellow honorees in a tribute. “We can’t change the world through justice alone we need to change at a more individual level.” The gymnast and activist made the most of her time on stage in a room full of people in an excellent position to make changes.

Lock it up. Camila Cabella shutting down the night

Camila Cabello performs onstage during TIME 100 Next 2019 at Pier 17 on November 14, 2019 in New York City.
Kevin Mazur—Getty Images for TIME

No one sets the mood quite like Camila Cabello and that much was evident when she took the stage for “Never Be the Same” and “Señorita.” Song after song, she was firing on all cylinders. Shimmying to the beat, the artist got heads of state and luminaries on their feet for the curtain dropper.

Talk about shutting down the night on a high note. 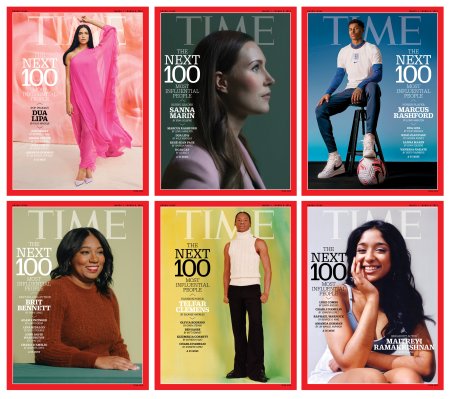 Watch a Special Event Celebrating the 2021 TIME100 Next
Next Up: Editor's Pick