Why All of Trump's Defenses Against Impeachment Are Doomed to Fail

The sky turns to a fiery color as the sun begins to rise behind the U.S. Capitol building, on November 7, 2019 in Washington, D.C.
Mark Wilson—Getty Images
Ideas
By Joyce White Vance
Vance is distinguished professor of the practice of law at the University of Alabama, a former U.S. Attorney for the Northern District of Alabama and an NBC News and MSNBC legal analyst.

We’ve reached the part of this tired charade where even those who’ve tried to escape the obvious conclusion now know that the emperor has no clothes. The mounting evidence from career diplomats, and Trump’s own political appointees, has laid bare his self-serving ploy in Ukraine.

Many people have become numb to this Administration’s wrongdoing after almost three years of constant scandal. Some feel that no matter what Trump does, he’ll never be held accountable. Why should they invest time in today’s awful news, when it will give way in a few days or weeks without anything changing?

This is the challenge the Democrats face as they open public impeachment hearings this week. Can they get the country to pay attention? Can they produce a coherent narrative that will help people understand this most serious of Trump Administration debacles?

Trump has, per usual, thrown out a barrage of defenses, hoping something will stick. So far nothing has. Here are the key defenses he’s tried and those he’ll likely move on to next, and why they all fail.

The Reality: Despite what Trump has claimed repeatedly, anyone who followed the president’s directive to “read the transcript”— actually a memo of the conversation that at least one witness has told Congress excluded some pertinent information — knows that even this sanitized version of the President’s call exposes the scheme to public view. Rudy Giuliani, Energy Secretary Rick Perry, and Trump appointees Ambassador to the E.U. Gordon Sondland and Special Representative for Ukraine Kurt Volker worked toward the call where Trump would tell Zelensky, “I would like you to do us a favor” and ask for the announcement of an investigation that everyone now knows was about Joe Biden and his son. Trump was intent on extracting the favor before he would permit the purchase of American military equipment and release over $400 million in aid to Ukraine, which suffered the loss of 13,000 people in five years during the conflict with Russia, and agree to meet with Zelensky. Far from a perfect call, it was a scheme to have a foreign country intervene in our election. It was so far off the mark that when White House officials learned about it, they stashed the record of it on a highly classified server, apparently in hopes it wouldn’t come to light. You don’t have to cover up legitimate government operations.

The Defense: The whistleblower must come forward and their identity must be exposed.

The Reality: Trump has called for the whistleblower’s name to be disclosed, but whistleblowers aren’t required to come forward and there are good reasons to protect them when they choose not to. Whistleblower laws protect the identity of these anonymous truthtellers so they can expose government abuse and fraud without subjecting themselves to workplace reprisals or worse. Even Senator Chuck Grassley, a Trump ally, said the whistleblower’s identity should be protected. Whistleblowers are tipsters whose information leads to opening an investigation. If the tip is untrue, the investigation will not pan out. But if it is — and virtually everything the whistleblower in this case said has been confirmed — then they have done an enormous service to the country. Here, aid for Ukraine was released just days short of a scheduled announcement by Zelensky on opening an investigation that could have affected the course of our future election. This is precisely what our founding fathers wanted to prevent when they condemned foreign influence in our elections. If the whistleblower isn’t a firsthand witness who’ll testify at trial, the tip ends their involvement. There isn’t a requirement in criminal cases that prosecutors disclose their identity if they don’t testify. And outing the whistleblower could deter future whistleblowers from coming forward.

In a plot twist, the whistleblower who made the complaint about Trump’s conduct offered to answer questions in writing. The President, who notoriously declined to sit for an interview with Special Counsel Robert Mueller and submitted answers on carefully limited topics, reacted vehemently to the whistleblower’s offer: “Written answers not acceptable!”

The Defense: The President has a right to confront his accuser.

The Reality: Senator Rand Paul and others have argued that the President has a Sixth Amendment right to face his accuser, but the President doesn’t have that right at this stage in proceedings. The Sixth Amendment confrontation clause right guarantees that a criminal defendant can question witnesses who testify against them at trial. Even Justice Scalia, in his majority opinion in U.S. v. Crawford, a 2004 case that exhaustively examined the history of confrontation rights, did not suggest it applied to anything other than witness testimony and statements offered in evidence against a defendant at trial. If a grand jury indicted Trump on criminal charges, he would have the right to cross-examine witnesses whose testimony was used against him at trial by the prosecution. If an impeachment trial in the Senate takes place, he’ll have a similar opportunity to cross-examine witnesses, even though impeachment is about losing your job, not about being convicted of a crime and sentenced to prison.

The Defense: Bribery isn’t a crime unless the bribe succeeds.

The Reality: You don’t have to be successful at committing a crime to be guilty. Attempt is a crime. (Of course, impeachment doesn’t require a crime, but since many conservatives argued during the Mueller investigation that the President should be impeached only if he committed one, it’s worth pointing out that the conduct here was likely criminal.) Trump’s former UN Ambassador Nikki Haley defended him in an interview, saying, “You’re going to impeach a president for asking for a favor that didn’t happen and – and giving money and it wasn’t withheld?” Yes, absolutely. The Constitution clearly states that bribery (which Congress has specified includes attempted bribery) is an impeachable offense. It’s bribery for a public official to “corruptly demand” or “seek” a personally valuable favor in exchange for taking official action or violating his duty to act (like withholding congressionally allocated aid to Ukraine). The crime doesn’t and shouldn’t hinge on whether the criminal is lucky enough to get away with it. Trump is no less guilty because he failed to pull it off. This argument sets an embarrassingly low standard for what we expect of any elected official, let alone our President.

The Defense: Giuliani and Volker, Sondland and Perry — who called themselves “the three Amigos” — went rogue, pursuing Ukraine policy on their own, without Trump

The Reality: This argument hasn’t been fully embraced yet, though it’s been floated by some House Republicans, but inevitably, Trump will land here, as the testimony of career diplomats, along with Colonel Alexander Vindman who was on Trump’s call with President Zelensky and raised it with White House lawyers, is corroborated by Trump’s own appointees like Sondland. In a case where the evidence clearly establishes misconduct, the ringleader often denies personal knowledge and responsibility, while admitting that their subordinates committed crimes. Here, the argument becomes that some combination of Giuliani, acting chief of staff and director of Office of Management and Budget Mick Mulvaney, Secretary of State Mike Pompeo, Perry, Volker and Sondland decided to help Trump, without his knowledge or approval. We know it’s not true because the President was involved in so many ways – giving Giuliani the power to run roughshod over the State Department’s Ukraine policy, for instance. Certainly Trump knew and approved by the time of the July 25 phone call with Zelensky, when he put his imprimatur on what Sondland and others had already told the Ukrainians, that no aid or meeting would be forthcoming without the announcement of the investigation Trump sought. On that call Trump also directed Zelensky to speak with Giuliani and Attorney General Bill Barr. There’s no way he can absolve himself of what happened here.

The Defense: Even if he did everything Democrats are alleging, it’s not impeachable conduct.

The Reality: On November 10, Trump cautioned his followers in a tweet not to make this argument. He reiterated that the call was “perfect” and he did “nothing wrong.” But we’ve seen Trump move the goal posts before, and as his argument that he did nothing improper gets publicly debunked for the whole country to see this week, expect him to do that again and act as though nothing has changed. Some of his allies are already making the argument in anticipation of that moment. Trump committed impeachable acts. Democrats will offer the country firsthand testimony that Trump was pursuing a personal goal — his own reelection — in Ukraine, at the expense of America’s national security. Foreign policy experts say Ukraine is a key bulwark in our defense against Russia. If sacrificing the country’s interests in favor of his own is not impeachable conduct by a President, then America is open for business not as our leaders have traditionally meant it, but in the Russian oligarch sense of that phrase.

None of these defenses of Trump’s conduct withstand scrutiny. And with the start of public hearings, the meritless process complaints by Republicans that the investigation was being conducted in private (something they did when they were in the majority) are no longer relevant.

There will be testimony from Ambassador Taylor, who texted Sondland that he thought it was a bad idea to withhold aid:

Sondland’s response, which came after a call to Trump, appears carefully rehearsed:

[9/9/19, 5:19:35 AM] Gordon Sondland: Bill, I believe you are incorrect about President Trump’s intentions. The President has been crystal clear no quid pro quo’s of any kind.

That Trump denied demanding a quid pro quo in his call with Sondland doesn’t make it any less of a quid pro quo, a demand of “this for that,” which is the hallmark of bribery and extortion.

The question is whether Democrats can convince the country that any of this matters. Perhaps a recent rules change, allowing each side to begin witness testimony with 45 minutes of questioning by staff attorneys, will make a difference in how the narrative unfolds and catch the public’s attention. Democrats know they need to tell a clear story in these hearings, one that will stand up against a President who is a master of the turn of popular phrase, the catchy mantra, the chanting crowd. This may well be their last chance to hold this President accountable. 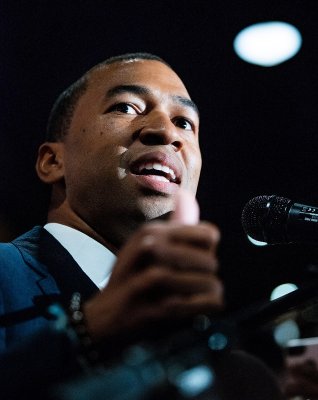 Montgomery, Ala., Was a Hub of the Slave Trade and a Center of the Civil Rights Movement. It's About to Swear in Its First Black Mayor
Next Up: Editor's Pick