At least 60 people were reported injured after violent unrest broke out across Hong Kong Monday morning.

Police fired live bullets as anti-government protesters caused major disruptions to transport networks in a bid to enforce a general strike. At least one man, said to be a 21-year-old student, was wounded by gunfire and is in hospital in critical condition. Police accuse him of attempting to snatch an officer’s weapon.

In a separate disturbance, a man was set alight after engaging in a tense argument with a group of youths. Local media said his condition was also critical. Five other casualties were listed as serious.

Two petrol bombs were meanwhile thrown into a commuter train as passengers were boarding, the subway operator said. Miraculously, nobody was injured.

Disturbances were reported in several suburbs and on at least three university campuses, with outbreaks of vandalism and arson. Students hurled bricks and petrol bombs at police, who responded with rubber bullets and tear gas.

During lunch hour, startled pedestrians ran for cover after police fired teargas at protesters occupying Pedder Street, in the heart of the financial district. The street is one of the city’s most exclusive, home to prestigious offices, top designer boutiques, and the glitzy Landmark shopping mall.

Many office workers took part in the unrest. A 29-year-old banker named Alex said he didn’t go to work today but came out on the streets to protest instead after he heard the news of the morning’s shooting.

“The government just wants to bring the violence to the next level to make us afraid,” he told TIME. “Even though we are afraid, we still have to come out. We still can’t give up.”

But Michael, a 47-year-old company owner, told TIME that the protesters were guilty of “Sheer terrorism—a hundred percent all the hallmarks of terrorism. We’re not telling this to the world, we’re not calling this terrorism, because we’ll lose investors.”

Tourists were among those caught up in the unrest. When asked if she would return to the city, a 26-year-old traveler on her first visit to Hong Kong replied “To be honest, I don’t think so. It’s dangerous here.”

People react after tear gas was fired by police during a protest in Hong Kong on November 11, 2019.
ANTHONY WALLACE—AFP via Getty Images

Subway services were heavily disrupted as protesters threw objects onto the tracks, vandalized facilities, and set fires in stations and train compartments. Several stations were closed.

Protesters also set up roadblocks at several major choke points, bringing traffic to a standstill during the morning and evening rush hours, and forcing bus passengers to disembark and walk. The Cross Harbour Tunnel, the main road artery connecting the Kowloon peninsula to the financial and commercial districts of Hong Kong Island, was blocked. Police said as many as 120 locations were barricaded or obstructed.

“The problem Hong Kong is facing right now is uncontrolled police violence,” said a doctor taking part. “This use of live fire on unarmed civilians is unacceptable by international standards,” he told TIME.

“This behavior is absurd and unforgivable,” said a 24-year-old radiographer. “There’s no excuse, [the police officer who opened fire] was trying to kill.”

As night fell, protesters remained at the barricades on major roads, engaging in running battles with police, who deployed tear gas and water cannon. Protesters made calls on social media for further action tomorrow.

“If there is still any wishful thinking that by escalating violence the [government] will yield to pressure to satisfy so-called political demands, I am making this statement clear and loud here: that will not happen,” she told media.

“Violence will not give any solution to the problems Hong Kong is facing. Our joint priority now is to end the violence and return Hong Kong to normal as soon as possible.”

Monday’s disturbances come after a weekend of vigils and unrest as protesters vented their anger at the death Friday of a 22-year-old student, Alex Chow. Chow had been in a coma for several days after being found with serious head injuries near the site of a confrontation between police and activists.

Hong Kong’s anti-government unrest is now in its fifth month and represents the most serious challenge to the Chinese Communist Party in decades. Protesters are demanding greater political freedom and have repudiated Beijing’s sovereignty over the semi-autonomous enclave, which was retroceded to China in 1997 after 156 years as a British colony.

The government denied that it would impose emergency powers in response to Monday’s protests and was also forced to quash rumors that it was planning to impose a daily cash withdrawal limit at banks.

Police said 266 protesters had been arrested over the past week. 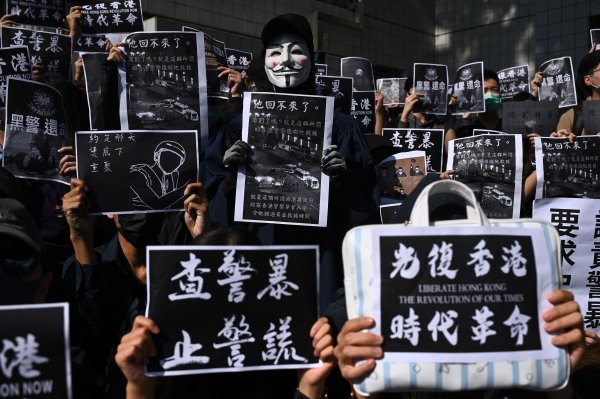 Protests Erupt in Hong Kong After Student's Death
Next Up: Editor's Pick