Brad Smith is the president of Microsoft Corporation

Christopher L. Eisgruber is the president of Princeton University

Talent, from every source and background, is the lifeblood of innovation. As the presidents of Microsoft and Princeton University, we have seen firsthand how participants in the Deferred Action for Childhood Arrivals (DACA) program contribute to our institutions and our country. Standing up for DACA students is not only the right thing to do morally, it is also the right thing to do competitively.

That is why Microsoft and Princeton joined Dreamer María Perales Sánchez to challenge the federal government’s 2017 termination of DACA. Students like Maria, who graduated in 2018, and employees like the more than 60 Dreamers at Microsoft, should be allowed to work, study and thrive in the United States, not be forced to leave the only country they know as home.

Our two-year legal fight has now made its way to the Supreme Court, which will hear cases on November 12 related to DACA.

DACA, announced by President Obama in 2012, cleared a path for motivated students — who arrived in the United States as children — to pursue education and employment, allowing them to meet their full potential and contribute positively to this country without fear of deportation. The Trump Administration’s unlawful rescission of DACA was a tragic mistake, one that not only hurts Dreamers and their families, but also undermines our nation’s ability to compete in a global market for talent.

Hundreds of thousands of DACA recipients grew up here, attended school, pay taxes and contribute to society. This nation’s colleges and universities, businesses, economy and communities benefit directly from the determination and aspirations of Dreamers.

Microsoft and Princeton came together to support DACA because it is a wise and humane policy. Leaders across higher education and business want a permanent solution for Dreamers because it is both an economic imperative and a humanitarian necessity.

Princeton’s continued success as a world-class university depends on our ability to attract students, faculty and staff from all backgrounds. Thirty percent of our tenured and tenure-track faculty are citizens of other countries. They make a critical difference to teaching and research on our campus, and they make a critical difference in our country’s ability to compete on a global scale. We think it is essential to stand up for the people born around the world who now contribute to America’s innovation and prosperity, including DACA recipients.

At Microsoft, DACA beneficiaries work in roles ranging from engineer to finance manager. Microsoft aims to make technology that empowers every person on the planet, and to do that, we need to better reflect the world we seek to serve. Our innovations thrive on diverse voices, experiences and perspectives. Attracting and retaining talented people from all over the country and the world helps our company and our economy grow.

One of our Microsoft employees came to this country when he was only 4 months old. He has never known a home other than the United States. He earned a bachelor’s degree in computer science from California Polytechnic State University. Today, he works on one of the most important products that we create — our cloud computing service, Microsoft Azure.

Microsoft and Princeton’s challenge to the federal government’s termination of DACA is part of our institutions’ long-standing support of sound immigration policies. In a world where talent is mobile, we need to do everything we can to ensure that those who want to contribute and innovate are welcome here in the United States.

While we hope the Supreme Court will rule in our favor, we also continue to urge Congress to pass legislation that provides permanent legal protections for the full population of Dreamers. We press this point when we meet with congressional leaders in Washington, and we will continue to support this goal no matter how the Court rules.

Legislators from both sides of the aisle have expressed support for Dreamers. We urge members of Congress to act with courage and not let a path to citizenship for Dreamers fall prey to the polarization that grips so much of society today. As our co-plaintiff María Perales Sánchez has said, a permanent legislative solution would mean that young people like her could have some control over their lives and the ability to follow their dreams.

November 12 will be an important chapter in this journey. When Dreamers gather on the steps of the Supreme Court, we will be standing with them to give voice to this vital issue. 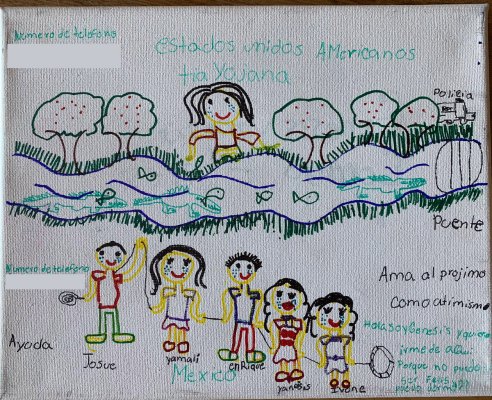 See Drawings From Migrant Children Stuck in Mexico
Next Up: Editor's Pick