This week, FKA twigs goes deep — and outdoes herself — on her experimental, wide-ranging, soul-searching new album Magdalene. Emotional Oranges release their second EP, The Juice Vol. II, a vibey pop-R&B project. Lucy Dacus completes her cycle of holiday song releases with “Fool’s Gold,” an original track that deals in the bittersweetness of New Year’s Eve. Doja Cat follows up the viral “Mooo!” with the bubbly “Cyber Sex.” And Johnny Utah tries on surf-rock for size in “4Tounce.”

It starts with what sounds like wind chimes: delicate, off-kilter plinkings that give way to an eerie high-pitched buzz. And then her voice comes in, in an enhanced whisper: “A woman’s work. A woman’s prerogative. A woman’s time to embrace she must put herself first.” Stick with the five-minute-plus track, and many other elements emerge: choral echoes, deep-water percussion, audio fuzz, callbacks to early single “Cellophane,” tweaked melodies that defy easy categorization. FKA twigs is an artist’s artist: she knows how to craft a catchy tune (see: earlier work like “Two Weeks”), but she’s more interested in grappling with sounds and lyrical concepts that demand that her listeners play closer attention. “mary magdalene,” off her new album Magdalene, considers that historical figure and the grey areas of her identity: sinner, saint or something in between? FKA twigs wants us to interrogate any kind of binary when it comes to narratives about women and desire, both through her music and her visuals; she’s also a dancer and video director who has explored various modes of femininity. “I’m from a generation where, as a woman, I was taught that your Prince Charming would choose you. And when he did you were grateful,” she told New Music Daily with Zane Lowe on Apple Music’s Beats 1. “Magdalene is unraveling that and just finding my voice without society’s whispers.” The result, as captured on “mary magdalene,” is uncompromising art.

R&B duo Emotional Oranges have been making forward-thinking, tender jams for a couple of years now, often with a melancholy bent. “West Coast Love” is lighter and breezier, a sweet slice of swinging R&B off their new sophomore EP, The Juice Vol. 2. It’s got an old-school beat and lyrics that conjure up the feeling of young love without complications: “Jukebox on a blacktop / That’s that West Coast love / After school, hookin’ up in your drop top / West Coast love,” all sung with low-key precision. The pair of artists behind Emotional Oranges have kept their identities intentionally opaque, not as a ploy but as a challenge: can you envision yourself in their disembodied voices and sounds? The answer, for many listeners now, is yes, thanks to music that is both specific in its storytelling and universally appealing in its good vibes.

Lucy Dacus was rightfully lauded for her sophomore album Historian in 2018, and the collaborative boygenius album released the same year with fellow indie folk singers Julien Baker and Phoebe Bridgers. In 2019, she decided to switch things up, putting out a few new songs and personalized covers to coincide with each major holiday. It could have been a gimmick, but in the capable hands of someone as incisive as Dacus, it’s affecting — especially “Fool’s Gold,” the final piece in the 2019 series, which is meant to correspond with New Year’s. She’s said it’s based on a true story, and you can taste the authenticity of her lyrics: “I threw the party so I could stay put / You brought the bottle like a promise I forgot / A new year begins, it ushers us in / The knot in my gut is coming with.” New Year’s Eve is supposed to be a celebration, but often it’s much more bittersweet than that. Here’s a song to remind us we’re not alone in that confusion.

Few artists are embody the influence of the internet on music in 2019 as much as Doja Cat. A self-taught L.A. rapper, singer and producer, she got her start with an independent release on SoundCloud in 2013. Last year, her absurdist song “Mooo!” became a viral YouTube hit thanks to its intentional meme-ability. And now we have “Cyber Sex” off of her new album Hot Pink. Made with bubbly synth beats, it doesn’t beat around the bush. “Is you into that? Let’s break the internet,” she suggests as she describes the song’s title with explicit joy. Breathy and bright, it’s contemporary not-quite-rap at its most infectious.

It’s starting to get cold outside, but “4Tounce” sounds like summer: R&B-inflected surf-rock infused with the woozy spirit of young love. Or, at least, that’s what 23-year-old Johnny Utah is after, as he explains in the earworm track. “I don’t want your late night lovin’ / stayin’ at your place. I just want to be the one that you want in the day,” he laments, reflecting on unrequited affections. Philly-raised Utah — real name Jacob Sullenger — has only been releasing music for a few years, but so far he’s shown many different sides: some songs lean funk, others soul, all with a skewed-and-sliced modern twist. 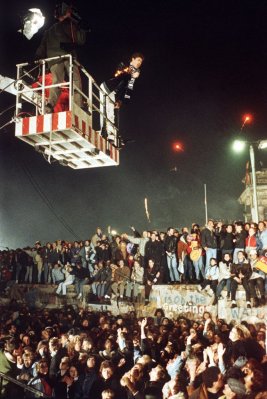 'I Was Just a Man Who Sang a Song About Freedom': 30 Years Later, David Hasselhoff Looks Back on His Surprising Role in the Fall of the Berlin Wall
Next Up: Editor's Pick