A Buffalo Wild Wings manager in Massachusetts died Thursday after being exposed to toxic fumes caused by a noxious combination of chemical cleaning products in the restaurant’s kitchen.

At least 13 others were hospitalized, officials say.

The manager was rushed to the hospital when emergency services arrived at the Buffalo Wild Wings branch in Burlington, Mass., and found him in obvious distress, Michael Patterson, assistant chief of the Burlington Fire Department, tells TIME. He died a short time later.

In a statement to TIME, a spokesperson for Buffalo Wild Wings referred questions to local authorities. “We are shocked and saddened to learn of this tragic accident at our franchise-owned sports bar and are working closely with our franchisee and the authorities while they conduct an investigation,” the spokesperson said.

Patterson says the mixture of two cleaning products produced a chemical combination that became life-threatening. The manager was exposed to the chemicals after another employee poured the cleaner Super 8 (sodium hypochlorite) on the restaurant’s kitchen floor. Unbeknownst to the employee, an acid-based cleaning agent had previously spilled in the area where he was using the Super 8, according to Patterson.

“When he started to scrub, there was some type of chemical reaction,” he says.

When mixed with acid, sodium hypochlorite produces chlorine gas, which is poisonous, Michael Goldberg, a certified industrial hygienist and safety professional with the Consulting Engineers and Scientists, tells TIME. Exposure to chlorine gas can cause nausea, burning pain, chest tightness and difficulty breathing, according to the Centers for Disease Control and Prevention. The specific contents of the acid-based cleaner used at Buffalo Wild Wings remain under investigation.

“Any type of those cleaners that are used in an environment need to be used separately,” Goldberg says. “It’s up to the user to ensure they know how to use it, and read what the instructions are when using the product.”

After the employee mixed the cleaners, their eyes started burning and they quickly left the kitchen as the smell from the two cleaning products spread through the restaurant. In an attempt to get rid of the products, the general manager used a squeegee to collect and move the liquid.

“That’s when he was exposed to it. It was probably an immediate reaction to the product,” Patterson says. Overcome, the manager also left the building. Emergency crew found him outside the restaurant and transported him to the hospital, where he later died. “We knew the guy was in trouble.”

Thirteen others, including two customers, were sickened in the chemical incident and were hospitalized. Patterson says more people could have gone to the hospital because fire officials advised anyone who was at the restaurant at the time to seek medical attention. At least four people were kept in the hospital overnight for observation.

Emergency services evacuated and ventilated the restaurant before a state hazardous materials team arrived to neutralize the area. The building was then turned over to restaurant management, which will be responsible for handling further cleaning, according to Patterson.

The CDC advises anyone who comes in contact with chlorine gas to leave the area where it was released and get fresh air. If a person’s skin or clothing comes into contact with the gas, the CDC says to wash the skin and remove the item of clothing.

The risk of exposure to harmful chemicals is high for any worker whose job involves cleaning, Goldberg says. Sodium hypochlorite cleaners are commonly used in restaurants, hospitals and other environments where workers use cleaning chemicals, he says. Workplaces that use hazardous chemicals are required to train employees on potential hazards, according to the federal Occupational Safety and Health Administration (OSHA), which is investigating the incident at Buffalo Wild Wings.

“If it’s an industrial or commercial product, the staff needs to be trained,” says Goldberg, who has previously trained employees on how to evaluate and use cleaning products.

Goldberg says a person who sees an unidentified cleaning agent or unknown liquid on the floor should not add anything to the mix.

“If you don’t know what it is, don’t pour something else on it, except water,” he says. “Just clean it up as is. Use paper towels with gloved hands.” 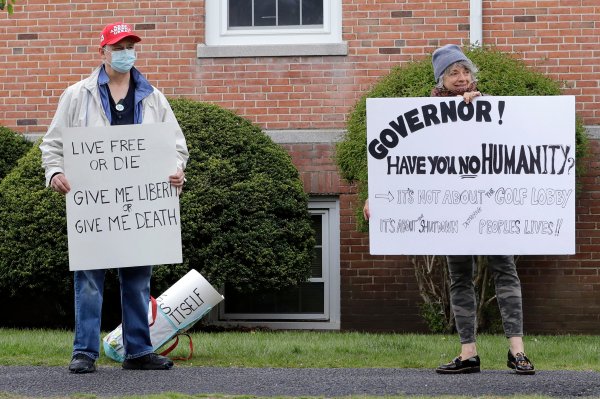