I am Indian. Why Is the Government Sending Me Into Exile?

People hold a giant Indian national flag ahead of the 73rd Independence Day celebrations in Mumbai in August 2019.
Himanshu Bhatt—NurPhoto/Getty Images
Ideas
By Aatish Taseer
Taseer, a novelist and journalist, is the author, most recently, of The Twice-Born: Life and Death on the Ganges

The letter from the Indian Ministry of Home Affairs arrived in September 2019. My mother sent me a WhatsApp message of the letter, informing me that the Government of India was revoking my Overseas Citizenship of India (OCI). India doesn’t recognize dual nationality and the OCI – a permanent visa for persons of Indian origin – is the nearest equivalent to dual citizenship and provided to millions of Indians around the world. I had 21 days to respond and to contest their claims; it was day 20 when I had received the letter. If I didn’t respond it would be presumed I had nothing to say in the matter and my OCI would be cancelled. I responded by email immediately to contest their claims, with the Indian Consul General of New York acknowledging receipt, and a hard copy of which was delivered to the Home Ministry. Then, on November 7, after The Print reported that my status was under review, the government announced via Twitter that my OCI status had been withdrawn. This was the first I heard of it.

In May 2019, at the height of India’s general election, I had written an article for TIME that was critical of Prime Minister Narendra Modi. The piece, one of two on the cover of TIME’s International Edition, examined his record in India and the atmosphere of Hindu nationalism. Something about the timing, the headline (“India’s Divider in Chief”) and the image of Modi sent his supporters into a fury. In the days and weeks that followed, people put false content on my Wikipedia page, accusing me of working as a “PR Manager” for the opposition Congress Party; they began on-line petitions denouncing me; they ran amok on social media, making multiple death threats and circulating multiple memes of me with a Pakistani eyepatch. Suddenly, I was portrayed as an agent of shadowy Western interests determined to exert undue influence over the Indian election.

I am Westernized; I am English-speaking; I am part of the despised elite whose entrenched power had helped fuel the rise of Modi. But there was another aspect of my identity that made me especially vulnerable to attack: my father was born in British India to a British mother and a father who became Pakistani when that country was created. And, within twenty-four hours of my piece being published, the BJP spokesman, Sambit Patra, seized on it to delegitimize me. Addressing a press conference, Patra said that the TIME story had been written by a Pakistani and “that nothing better could be expected from Pakistan.” It was a calculated and dangerous misrepresentation, which Prime Minister Modi himself soon seized on. “Time Magazine is foreign,” he said, “the writer has also said he comes from a Pakistani political family. That is enough for his credibility.” Not only was I not a Pakistani, but my relationship with my father – who was Governor of Punjab in Pakistan when he was assassinated in 2011 – had been complicated. Born out of wedlock, I was not in contact with my father until I was 21. I was born in Britain and have British citizenship, but since the age of two I had lived and grown up in India, with my Indian mother, who is a well-known journalist. She had raised me on her own in Delhi and was always my sole legal guardian, and the only parent I knew for most of my life. It was why I had always been viewed as Indian in India and why I had been granted an OCI. The story of my parents’ brief, passionate relationship had in part been the subject of my first book, Stranger to History, which was published in 2009 and widely reviewed in India. I was living in India at the time, and at no time was my legal status ever questioned or challenged by the government until this September.

I had expected a reprisal, but not a severing. While the government did not initially reveal their motivations behind this action, they have now stated their reasons for removing my OCI: “concealed the fact that his late father was of Pakistani origin.” But it is hard not to feel, given the timing, that I was being punished for what I had written.

I read the letter, which in bland bureaucratic language informed me that the country I was raised in and lived in for most of my adult life was no longer mine: “after consideration of facts and circumstances in the matter, “ it read, “the Central government is of the provisional opinion that the registration as an OCI cardholder granted to Aatish Ali Taseer, may be cancelled under Section 7D(a) of the Citizenship Act, 1955, for obtaining OCI card by means of false representation and the concealment of material facts.”

The government had limited means by which they could legally take away my overseas citizenship. Yet they have now acted on those means. For 39 years, I had not so much as needed a visa for India and now the government was accusing me of misrepresenting myself, accusing me of defrauding them. Now, I may not even be able to obtain a standard tourist visa for India, the Consul General in New York informed me by telephone in September, as I have been accused of defrauding the government. “…[T]he registration of such a person,” reads the Home Ministry’s website, “will not only be cancelled forthwith but he/she will also be blacklisted preventing his/her future entry into India.” With my grandmother turning ninety next year – and my mother seventy — the government has cut me off from my country and family.

India is my country. The relationship is so instinctive that, like an unwritten constitution, I had never before felt it necessary to articulate it. I could say I was Indian because I had grown up there, because I knew its festivals and languages, and because all five of my books were steeped in its concerns and anxieties. Though I am a British citizen by birth, the OCI, as a substitute for dual citizenship, had made this bond even more real, as it had for so many people of Indian origin worldwide. Even though marriage had taken me to the US, I have returned to India frequently to write about it and to visit with the only family I have ever known. But to say as much was already to express a degree of removal that felt false. It was like making a case for why one’s name was one’s name. I was Indian because I just was. It was fundamental and a priori. It came before one’s reasons for why it was so. Now that it has been questioned in this letter from the Home Ministry, I felt an odd sense of pity—not for myself, but for my family in India. I thought of my grandmother who had raised me. I thought of how she had met the unconventionality of my mother’s situation—an unmarried woman with a love child—with unquestioned love. That love had given me my sense of belonging. I thought of how outraged she would be to learn that those bonds of affection by which she had bound me to my place were being questioned.

I was due to fly to India from Greece a few days later to finish filming a documentary, but a lawyer advised me that I could be exposing myself to detention if I were to do so. As a journalist I have been in many fearful places in my life – from interrogations in Iran to questioning by the mukhabarat in Assad’s Syria – but this was the first time I had thought of India in that way. Instead, I left Greece and headed back to the U.S.

It is easy to see my situation as individual or unique. But it is symptomatic of a much larger movement. The government that stripped me of my overseas citizenship had just stripped the state of Jammu and Kashmir of statehood, autonomy and basic human freedoms. In the northeastern state of Assam, it was acting to strip 1.9 million people – the great majority Muslim, – of citizenship, rendering them stateless. Earlier this month, some of the country’s most esteemed intellectuals—such as the historian Ram Guha and filmmakers Adoor Gopalkrishnan and Mani Ratnam—were charged with sedition for writing an open letter to Modi imploring him to do more to combat the public spectacle of mob lynchings that have become a frequent occurrence under his premiership (the charges were subsequently dropped).

Out of a habit of mind, I clung to the idea of India as a liberal democracy, the world’s largest. But entering the United States in September, I was aware for the first time that I was no longer merely an immigrant, no longer someone moving between his home country and an adoptive one. I was an exile. 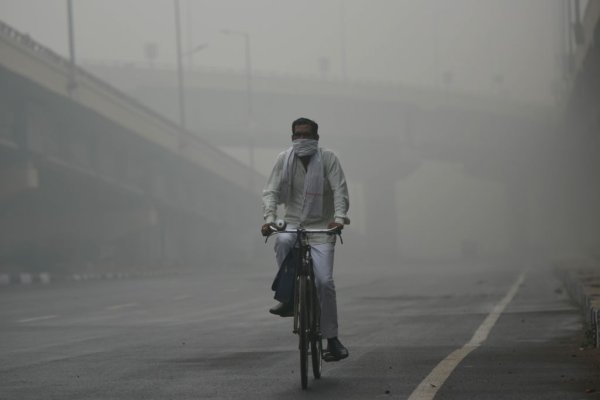 Air Pollution Levels 'Off The Charts' In India's Capital
Next Up: Editor's Pick