This Veterans Day, America's Military Families Have New Ways to Learn More About Their Ancestors' Service

Veterans Day falls every Nov. 11 in the United States, and in recent years the White House has made it a month-long tribute to veterans by declaring November National Veterans and Military Families Month, honoring those who fight for the nation as well as the family members who support them.

And yet, it can sometimes be difficult for veterans to talk to their families about the sacrifices they’ve made. For some, it takes decades to open up; other veterans never really talk about what they saw. But that doesn’t mean their families don’t want to know. In fact, family members and descendants of American veterans — even many generations later — are often eager to learn more about the experiences their relatives may not have spoken about during their lives.

The question, then, is how.

The answer might at first seem easy. Free of charge, people can request military files through the National Personnel Records Center in St. Louis. But what they get back can sometimes be hard to decipher, or incomplete.

Social media has helped families make the research easier. People can sign up for webinars to learn how to begin a search at the National Archives or to research veterans of a specific conflict, like Korea. Sites for crowd-sourcing headstone information like FindAGrave.com and BillionGraves help people figure out where veterans are buried. The website Fold3 is searchable by war. And if families know the unit in which their ancestor served, some military units keep detailed histories.

Popular genealogy websites like Ancestry.com and MyHeritage have vast newspaper collections that date back to the Revolutionary War era, so users can search for obituaries and announcements about births, engagements, marriages and awards. On Ancestry.com, military records are also free to search until Nov. 17.

But because the research can be time consuming, some people hire research assistants and genealogists. And since May of 2018, there’s been another resource available particularly for those seeking World War II records, as the National WWII Museum in New Orleans has been helping families fill in those gaps.

One person helped by the service is John Harkness, 79, who lives in Starkville, Miss. Harkness didn’t grow up with many relatives around, but he had “Uncle Jimmy” — Jim Stover, who served in the Pacific during World War II. Harkness remembers many things about his Uncle Jimmy: he was a “linoleum layer, liquor drinker, bar fighter, deer hunter, fisherman” and a wonderful uncle who gave the best Christmas gifts. Harkness credits Stover with encouraging him to take a break from studying and get outside. “He made me a more well-rounded person,” he says.

He remembers being awestruck by seeing his Uncle Jimmy in his sailor uniform, and among his prized possessions passed down from Stover’s time in the Navy were a grass skirt and a bayonet. Stover told him about the good things about serving in the Pacific — singing the praises of the Filipino women he met and recounting how he helped build airfields — but, “as many vets do, he didn’t talk much about the sad aspects of the war,” Harkness says.

So, when Stover died in 2011, Harkness was left with questions. “I wish I could remember more of what he told me,” he remembers thinking.

Harkness didn’t even know where exactly Stover served in the Pacific or what he actually did during the war, or even anything about his life growing up in California before the war. But he happened to pass the National WWII Museum in New Orleans, and wondered if its staff could help him.

As it turns out, he wasn’t the first to have that idea. Well before the program was quietly launched last year, people had been contacting the museum for research help. Staff historians and researchers responded to individual inquiries as they came in, but there wasn’t a formal process for researching veterans’ lives for surviving family members. However, the oral-history program the museum ran, interviewing veterans about their experiences, was naturally slowing down as the number of living WWII veterans decreased, says Rob Citino, Senior Historian at the National WWII Museum. That situation meant a window was open for something new.

Now, for $99 (plus tax) the museum will request a veteran’s file and mail it to the customer. For another $300 (plus tax), they’ll write up a biography of the veteran’s military service. For about $2,500, the staff will produce a professionally bound book with a longer biography, including details on how the veteran enlisted, his or her time in basic and specialized training, deployment and a history of the unit and battle or campaigns the veteran would have participated in — plus maps, images and charts if available.

The WWII museum can pull records from the National Personnel Records Center from before 1957; after 1957, the research becomes trickier because of privacy laws, so only a veteran or next-of-kin can get these records from the NPRC. On top of that, in 1973, a fire destroyed millions of records at the National Personnel Records Center, destroying about 80% of Army records and 75% of Air Force records. (The burnt files aren’t a hopeless case, however. For example, reconstructing 240 pages of burned files led to the discovery of a long-lost story about a Medal of Honor recipient, as the New York Times has reported.)

Perhaps most importantly, the professionals who do that research can decode the acronyms and jargon in the military records, and write up a summary of the person in layperson’s terms. And the researchers have the entire National WWII Museum’s collection and archives at its disposal, and they’ll include any relevant oral history interviews, photos and other files.

Harkness says that at his age, he couldn’t read the blurry ink in the files, so he enlisted the museum to help. The resulting report informed him that Stover enlisted in the U.S. Navy Reserve at the age of 26 and worked as a Seabee from 1943 to 1946. “When asked the reason for his enlistment, his answer was simple: patriotic,” the museum’s report said.

“Seabees are incredibly valuable to the entire effort,” says Dan Olmsted, a research historian at the museum. “They are the naval construction battalion. The build airfields and sanitation facilities to create an infrastructure on these islands once you’ve taken them.”

The report mentioned that during the summer of 1944, Stover worked on building the Torokina Airfield on Bougainville, the largest of the Solomon Islands, where he would have had to endure frequent Japanese attacks. Reading that section jogged Harkness’s memory, and he remembered his uncle did say something about attacks and dead bodies. He was even more proud when he read that the legendary Pacific commander Admiral Halsey commended his uncle’s unit for its “resourcefulness, tireless ingenuity, cooperation, and indomitable fighting spirit…that will everywhere be an inspiration.” The report also confirmed that Stover was sent to the Philippines in July 1945, just a month before the U.S. dropped the atom bombs on Hiroshima and Nagasaki. It also shed light on his uncle’s life before the war, noting that Stover ran track in school and liked photography.

Learning more about Stover “only increased my affection and respect for him what he went through,” says Harkness.

But he’s not done yet: His father-in-law served in World War II too, as an Army surgeon, and Harkness is eager to find out more about him next. 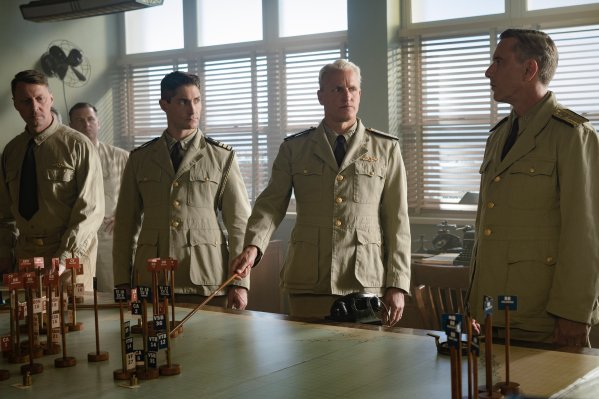 The Real World War II History Behind the Movie 'Midway'
Next Up: Editor's Pick