A Florida man was arrested and charged with battery after he groped a cast member at Disney World’s Magic Kingdom, police say.

Brian Sherman, 51, was “very excited” to pose with his wife alongside a costumed Disney princess on Saturday, according to an arrest affidavit from the Orange County Sheriff’s Office obtained by TIME. Sherman repeatedly told the costumed woman that he loved her character and sat on her left side, leaving the woman stuck between him and his wife, according to the affidavit.

Sherman then put his right arm around the woman’s shoulder and began moving it lower to grope her right breast. The woman was “immediately uncomfortable” but was “unable to move,” police say.

The affidavit says Sherman cupped her breast “with his right forefinger and thumb with only the thin skin-tight fabric in between her breast and the defendant’s thumb and forefinger.” Sherman allegedly groped the woman for about three to four seconds.

Sherman allegedly removed his hand from the woman’s breast after her coworkers corrected his placement, and posed for a photo with his arm around her shoulders. After Sherman left, the woman began shaking and crying, police say, and said she wanted him to be prosecuted and that she would testify in court. Her coworkers closed down the area where costumed characters greet visitors.

The photos taken during the greeting with the Disney character were used to identify Sherman, according to the affidavit. Sherman, an Orlando resident, was booked into jail on a battery charge. He did not immediately respond to a request for comment.

Sherman is already a registered sex offender in Orlando, according to records. In 1991, he was found guilty of sexual battery by an adult on a victim under the age of 12, records show. 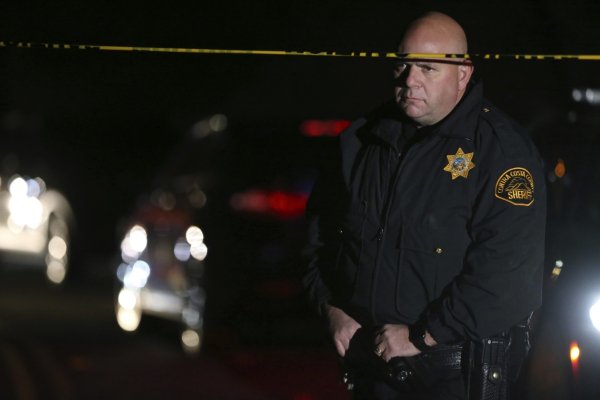 5 Killed in Mass Shooting at Calif. Halloween Party
Next Up: Editor's Pick