President Donald Trump is joined by Gordon Sondland, the U.S. ambassador to the European Union, second from right, as he arrives at Melsbroek Air Base, in Brussels, Belgium, on July 10, 2018.
Pablo Martinez Monsivais—AP
By Alana Abramson , Vera Bergengruen and Brian Bennett

For six weeks, President Trump has repeated one line as a staunch defense against accusations that he abused the power of his presidency: “no quid pro quo.”

He declared it on Twitter, on television, at rallies and to the press, repeatedly denying that he withheld hundreds of millions of dollars in military aid to Ukraine to pressure the country into investigating his political rival.

On Tuesday, that further unraveled.

The U.S. Ambassador to the European Union, Gordon Sondland, not only revised his testimony to describe an explicit quid pro quo but acknowledged that he had been the messenger of it.

In a three-page update of his original 10-hour testimony, Sondland admitted that he had told one of Ukrainian President Volodymyr Zelensky’s advisers that continuing to receive the U.S. aid was tied to their public announcement of two investigations sought by Trump: a probe into a company with ties to former Vice President Joe Biden’s son, and another into alleged Ukrainian collusion in the 2016 election.

“I said that resumption of the U.S. aid would likely not occur until Ukraine provided the public anticorruption statement that we had been discussing for many weeks,” Sondland said in the written statement, which was submitted on Monday released by House committees along with his 370 page testimony from last month.

He said he was submitting the revision after other witnesses in the impeachment probe “refreshed my recollection about certain conversations in early Sept. 2019.”

It was a stunning reversal. Less than two months ago, Sondland, a Trump donor who had given $1 million to his inaugural committee, had confidently texted his alarmed colleague to affirm the exact opposite. “The President has been crystal clear,” he told Ukraine Ambassador Bill Taylor. “No quid pro quos of any kind.”

But his admission will almost certainly not be enough for Republicans to turn on Trump.

“This is not the factoid that will cause House Republicans (or even wobbly Senate Republicans) to all of a sudden support impeachment,” said one senior Republican staffer in the House, requesting anonymity to speak more candidly.

Republicans also pointed to part of Volker’s transcript, where he told Rep. Lee Zeldin – who has become one of the President’s biggest defenders during the inquiry – that he never either country talking about a quid pro quo.

“And in no way shape or form in either the readouts from the United States or Ukraine did you receive any indication whatsoever for anything that resembles a quid pro quo?” Zeldin asked Volker, according to the transcript.

But Sondland’s testimony was one of four released by the three committees conducting the impeachment inquiries so far. They also released testimonies from Marie Yovanovitch, the former Ukraine Ambassador who Trump ousted; Mike McKinley, a former top adviser to Secretary of State Mike and former U.S. envoy to Ukraine Kurt Volker.

The release of hundreds of pages of transcripts with detailed evidence of the months-long campaign to pressure Ukraine is likely to force Republicans to alter the way they are defending the President. Some strategists even say their own political futures depend on it.

“The House Democrats will impeach the President; the Senate Republicans will not remove him. The issue is the political fallout in 2020,” said Mike Davis, former Chief Counsel for nominations at the Senate Judiciary Committee and a key player in the fight to confirm Supreme Court Justice Brett Kavanaugh. “The Democrats are already holding the impeachment trial right now in the court of public opinion, and Senate Republicans need to start fighting back now.”

One Republican senator close to Trump has told aides that Trump’s actions are troubling but “not removable” and they don’t amount to enough to justify taking Trump from office. Some Republicans have already been laying the groundwork for acknowledging Trump may have acted inappropriately, but stopping short of calling for his dismissal. “If it was a condition of getting aid that there be an investigation into a political rival, that was inappropriate,” the top Republican on the House Armed Services Committee, Mac Thornberry of Texas, told NPR on Oct. 28, adding: “Whether it rises to the standard of being an impeachable offense – that’s a different question.”

Even before Sondland’s stark reversal became public on Tuesday, some Republicans had shifted their defense in recent weeks, insisting that Trump was legitimately trying to root out corruption in Ukraine, and that a president can ask for a quid pro quo in foreign policy. They also repeatedly tried to push back against the secrecy of the process – an argument now undermined by the release of the transcripts and the announcement of public hearings.

Democrats said Sondland’s acknowledgment puts Republicans in an even tougher spot. “It pulls away the veneer for their contradictory legal defenses,” said Rep. Mike Quigley, a member of the House Intelligence Committee. “It’s one more startling example of a quid pro quo and that’s what it was.”

Trump himself has insisted that what he did – which the evidence now shows was pressuring a foreign country for personal political gain – is “not an impeachable event.”

The president has tweeted a version of “no quid pro quo” or similar denials more than 14 times in the span of the last month. Several of those were based on Sondland’s words in the text message, or Fox News hosts reacting to it.

“The text message that I saw from Ambassador Sondland — who’s highly respected — was: There’s ‘no quid pro quo.’ He said that,” Trump said on Oct. 4.

In response to the transcripts released Tuesday, White House Press Secretary Stephanie Grisham said, “No amount of salacious media-biased headlines, which are clearly designed to influence the narrative, change the fact that the President has done nothing wrong.” Grisham said that Sondland “did not know” when or by whom the aid was suspended and that he “presumed” there was a link to the aid.

Write to Alana Abramson at Alana.Abramson@time.com and Vera Bergengruen at vera.bergengruen@time.com. 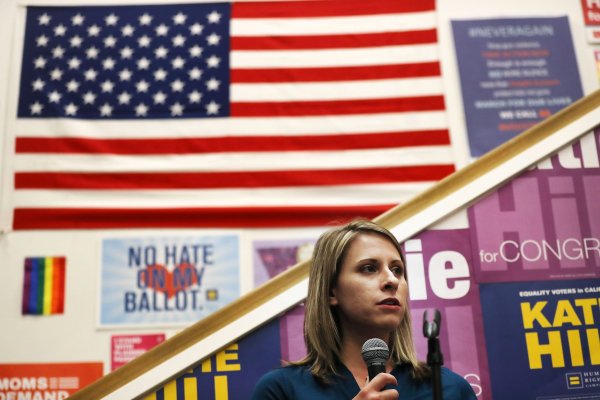