Halloween is a night filled with candy, revelry, and costumed youngsters filling the air with an echoing refrain made up of just one question, “Trick or treat?” Most people spend Halloween collecting treats, but some people prefer doling out tricks—including mean ones like stealing the pumpkins right off the porch of Sarah Jessica Parker’s and Matthew Broderick’s home in New York City.

The Sex and the City star took to Instagram to report “the Halloween heist of 2019” which robbed her three children of their holiday decorations.

“At some point between the hours of 9:30 p.m. last night and break of dawn this morning, all of our pumpkins were stolen,” the actress reported in her video. Her family was not targeted, because the pumpkin thieves managed to swipe “all the pumpkins on [their] block.” Parker explained that upon uncovering the crime, her husband, Broderick, had declared “decency is dead,” but she was holding out hope and trying to ensure that “this case does not remain cold.”

To help recover the lost decorative gourds, Parker called on the public for their assistance. “APB out for our beautiful pumpkins, carefully chosen and lugged all the way home from the Berkshires in Massachusetts,” Parker wrote in the caption, clearly feeling the gravity of the situation. To recognize her family’s seasonal display, she asked people to keep an eye out for the pumpkins, which had “distinguishing features” of being both “round and orange” and were made up of “various sizes” and were “not yet carved.”

So, if you see any round, orange, uncarved pumpkins, please report them to Parker immediately.

To save the spirit of Halloween, some kindly people took pity on Parker and her family and delivered new pumpkins so the family wouldn’t have to buy last-minute pumpkins. Parker seemed to truly appreciate the gesture, posting another video to Instagram, which she captioned, “Humankind…You know who you are….On behalf of my daughters who felt most aggrieved but all of us, thank you.” In the video, she continued to share her appreciation for the act of kindness. “I’m so touched,” she said. “That was so lovely, unnecessary, but deeply appreciated. Decency is alive and well, I feel whole again.” 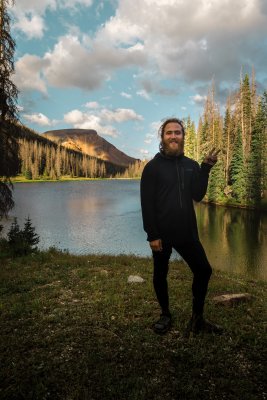 Mike Posner Walked Across the U.S. Here's What He Learned
Next Up: Editor's Pick