Why Impeachment Could Be a Nightmare for Chief Justice John Roberts

The impeachment inquiry has so far unfolded largely as a fight between Congress and the White House, with federal courts weighing in occasionally. But if the House moves to impeach President Donald Trump, thus triggering a trial in the Senate, then the chief justice of the United States will be drawn in to oversee the proceedings. That would put John Roberts, a man known for his temperance and modest view of judicial power, in an uncomfortable place: at the direct center of a bitter political battle.

It’s not a job the reserved judge will likely relish. For Roberts, who famously said Supreme Court justices should merely “call balls and strikes,” overseeing an impeachment trial would force him to engage very publicly in helping determine the fate of the president who has called him an “absolute disaster.” It will also put the Supreme Court’s fragile reputation of being above politics on the line—an issue that’s dear to Roberts and that could have ramifications for the high court for years to come as it fights to preserve public confidence in its work.

“I can think of no task I think the Chief wants less than to have that thrust upon him,” Megan Brown, partner at Wiley Rein, said at a Federalist Society panel on Oct. 2.

There’s no way for Roberts to get out of it; his role in any impeachment trial is mandated by the Constitution. Article I Section 3 reads, in part: “When the President of the United States is tried, the Chief Justice shall preside.” The framers named the chief justice to preside over an impeachment trial to highlight the gravity of the process, and the move had a practical component. The Vice President is the leader of the Senate, but in the case of an impeachment trial, he has an extraordinary conflict of interest: he would take over the presidency if the Senate trial results in a conviction. The appointment of the chief justice to oversee the trial eliminates that problem.

The last chief justice to oversee an impeachment trial encountered a stylistic clash between the Supreme Court and the Capitol across the street. Former Chief Justice William Rehnquist, for whom Roberts once clerked, oversaw the impeachment trial of President Bill Clinton in 1999. “I underwent the sort of culture shock that naturally occurs when one moves from the very structured environment of the Supreme Court to what I shall call, for want of a better phrase, the more freeform environment of the Senate,” he told senators at the time, according to CNN.

That contrast may be particularly pronounced in the case of Roberts, who has been outspoken about his belief that the judiciary should not wade into political matters. During his opening statement in his confirmation hearing in 2005, Roberts extolled the virtues of “humility” and “modesty” in judges. “Judges are like umpires. Umpires don’t make the rules; they apply them,” he said. “The role of an umpire and a judge is critical. They make sure everybody plays by the rules. But it is a limited role. Nobody ever went to a ballgame to see the umpire.”

But in an impeachment trial, Roberts would be required to weigh in on questions about evidence and administrative procedures in a process that is both highly broadcast and inherently political. “Roberts has told us that he doesn’t want the court involved in politics and that the court should stay away from divisive 5-4 decisions,” says Josh Blackman, associate law professor at South Texas College of Law Houston. But in an impeachment trial, he added, Roberts wouldn’t be able to make decisions alongside eight other justices: “It’s just him.”

While there are risks for the chief in assuming the central role in an impeachment fight, those who know him say there are opportunities, as well. “This will provide a setting in which the chief justice will be able to show the importance of neutrality and impartiality in our judicial system,” says one of Roberts’ former clerks. “Especially in a context in which there might be a lot of turbulence and a lot of politics involved, I suspect that he will present a picture of a judge in the middle of it all, trying to keep the process fair.”

If a House vote does indeed trigger a move to the Senate, Roberts will be presiding over the legislative branch’s trial during a fraught time for both Congress and the Supreme Court. In 2017, Senate Majority Leader Mitch McConnell changed the rules on Supreme Court confirmations, requiring only a simple majority, rather than the traditional 60 votes, to confirm a justice. The move has had enormous political ramifications. In 2018, Justice Brett Kavanaugh was confirmed with just 50 votes, along near party-lines, after he was accused of sexual assault. (Kavanaugh denies the allegations.) Perhaps partly as a result of McConnell’s rule change and Kavanaugh’s subsequent confirmation, Americans are now viewing the nation’s highest court through an increasingly partisan lens. In August 2019, there was a 26 percentage point difference between how Republicans and Democrats viewed the court, among the widest it has been over the past two decades, according to Pew Research Center.

Roberts has also tangled publicly with Trump. After Trump attacked what he called “an Obama judge” who ruled against his administration’s asylum policy in 2018, Roberts issued a rare statement. “We do not have Obama judges or Trump judges, Bush judges or Clinton judges,” he said. “What we have is an extraordinary group of dedicated judges doing their level best to do equal right to those appearing before them. That independent judiciary is something we should all be thankful for.”

Roberts also faces more mundane logistical challenges. If lawmakers follow the procedures from the last impeachment trial, it would run six days a week—during a time that the Supreme Court’s work may be continuing apace. The Supreme Court has plenty of its own work to do. This term, it agreed to hear its first major abortion case since Kavanaugh took the bench, and it will hear arguments about Trump’s termination of the Deferred Action for Childhood Arrivals (DACA) policy, among other high-profile cases. In Roberts’ absence, Justice Clarence Thomas, the most senior associate justice, would fill in for him in the top role at the Supreme Court. “You can imagine it could make Chief Justice Roberts’ life a little busy, if he’s got two full time jobs,” Carrie Severino, chief counsel and policy director at Judicial Crisis Network, said at the Oct. 2 Federalist Society event.

Roberts has acknowledged the current pressures facing the court. “We don’t go about our work in a political manner,” Roberts said in New York City in September. “The point is when you live in a politically polarized environment, people tend to see everything in those terms,” Roberts continued. “That is not how we at the court function, and the results of our cases do not suggest otherwise.”

The challenge for Roberts will be to maintain that reputation amidst what promises to be a partisan melee. “We have a very political process that’s about to blow up in his face,” says Blackman, “whether he wants it or not.” 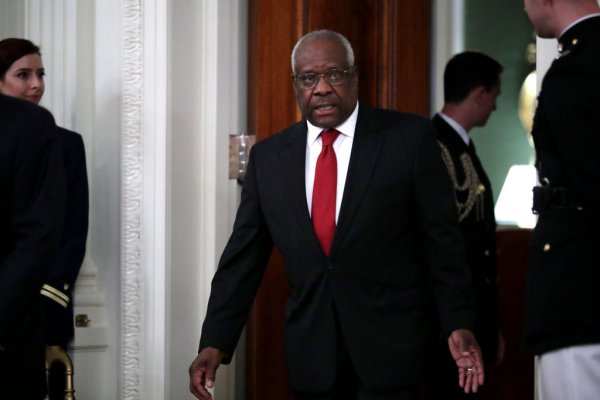 Clarence Thomas Speaks About His Confirmation Fight
Next Up: Editor's Pick