Here's What California's Kincade Wildfire Looks Like From Space

Northern California’s Kincade wildfire has grown so large that a satellite was able to record the plumes from 22,300 miles away in space.

The fire that began on Oct. 23 has grown to burn more than 66,200 acres of Sonoma county and is so far only 5% contained. As of Monday, three people have died, at least two first responders have been injured, 96 structures like homes and businesses have been destroyed and an additional 16 structures have been damaged. The California Department of Forestry and Fire Protection (Cal Fire) predicts the wildfire will not be fully contained until Nov. 7. Thousands have had to evacuate their homes throughout the state, and thousands more have been left without power as a result of precautionary outages.

In order to better visualize the Kincade wildfire, the National Oceanic and Atmospheric Administration (NOAA) compiled images taken 5 minutes apart by the GOES-17 satellite and combined them into a short clip.

“It’s kind of a striking animation,” says Dan Lindsey, an atmospheric scientist and satellite expert at NOAA who provided the images. “This is just a way for people who are not there to visualize what it looks like from space, and it gives us a good idea of the spatial extent of the smoke.” (The Bay Area Air Quality Management District issued an air quality advisory on Friday as a result of heavy smoke that is expected to continue through Monday.)

Similar satellite imagery captured the 46,000 wildfires that burned the Amazon rainforest in Brazil this summer, and wildfires that engulfed parts of the arctic in Siberia and Alaska in August. “At any given time you could probably look around the earth and find fires that are on the order of this big,” Lindsey says. “But these are in California and relatively close to population centers… these are quite intense.”

This year’s California wildfires, which have totaled more than 5,800, have already engulfed more than 162,000 acres and killed three people. Although wildfires are a natural part of California’s ecosystem, fire season has begun to start earlier and end later each year. “Climate change is considered a key driver of this trend. Warmer spring and summer temperatures, reduced snowpack, and earlier spring snowmelt create longer and more intense dry seasons that increase moisture stress on vegetation and make forests more susceptible to severe wildfire,” Cal Fire’s website explains.

More satellite imagery can be seen on NOAA’s website. 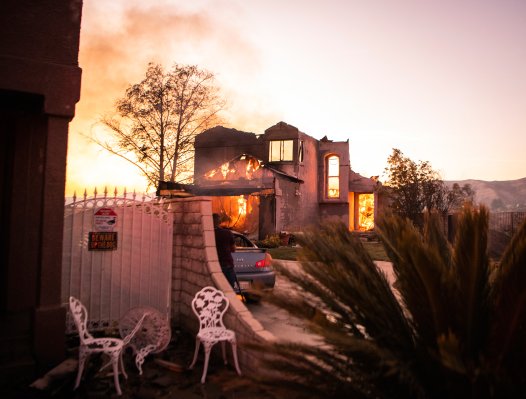 Firefighters Make Progress Against Fires Across California
Next Up: Editor's Pick