India's Capital Goes to the Polls

Indian polling officials check the details of voters at a polling station in New Delhi on April 10, 2014.
Raveendran—AFP/Getty Images
By Krista Mahr

It’s late morning on election day, and the twisted lanes of Balli Maran, normally packed, are empty. Fresh pots of simmering chai send steam into the dusty shafts sunlight that bisect the quiet streets. Fatima Begum, an 80-year-old woman from the neighborhood, has just cast her vote. She voted for Kapil Sibal, the Congress parliamentarian and minister defending his seat here. “I started voting for Congress, and I’ll die voting for Congress,” she says.

As New Delhi goes to the polls today, over 12.7 million voters like Fatima Begum had the chance to put their allegiance, their dissatisfaction and their yearning for change on the ballot. It’s a massive exercise that takes place from morning until evening at thousands of polling booths around the capital. At stake are seven parliamentary seats in Lok Sabha, India’s lower house of parliament. It’s not a huge number in the 543-seat body — the northern Indian state of Uttar Pradesh, for instance, has 85 seats — but the race in the capital will be closely watched, as it is seen as a triangular contest between the ruling Congress Party, the opposition Bharatiya Janata Party (BJP) and the upstart Aam Aadmi Party (AAP). Turnout in the last national elections in 2009 was relatively low, but after 66% of Delhi-ites showed up to vote for the local legislature in December, it is expected to be higher this round as the three big parties go in for a rematch.

The Delhi vote is seen as a major test for AAP in particular, whose debut in December’s elections put their leader Arvind Kejriwal in the chief minister’s seat for a short stint. Kejriwal stepped down after failing to pass his party’s signature anti-corruption bill, and the party took its campaign to the national stage. Whether the capital’s voters will again support AAP, or have drifted away after its short-lived governance, could signal what kind of lasting power and influence the new party has been able to muster. Rahul Popli, a 27-year-old in the southern neighborhood of Malviya Nagar, said he might have considered voting for AAP, but after Kejriwal stepped down in New Delhi, he decided against it. “When they were given the chance, they just ran away,” Popli says. Instead, he’s banking on the BJP and Modi, the long-time chief minister of Gujarat, to get India’s economy in particular back on track. “Modi’s done good work in Gujarat, so we’re rooting for him,” says Popli.

Four days into the Indian election cycle, the race is also on between the main opposition BJP and the incumbent Congress Party, which has been leading the nation’s ruling coalition since 2004. Congress won all of Delhi’s seven seats in 2009, but such a strong performance is not expected this time around. The party’s ouster from the state government in December was seen as a strong indication of a mutinous mood in the city and beyond. The BJP is hoping that voters’ yearn for something new — and their disenchantment with AAP — will translate into a big win for them.

In Balli Maran, it is basic issues, like whether residents feel they are getting clean water and enough electricity, that will help determine whether Congress holds the local seat. But the neighborhood also has a large Muslim population. That fact is not lost on main contenders Kapil Sibal of Congress, AAP’s journalist-turned politician Ashutosh and the BJP’s Harsh Vardhan. How Muslim voters perceive the BJP and Modi in particular, who was chief minister when anti-Muslim riots took place in Gujarat in 2002, is a big question in the national vote.

Mohammed Yasin, a 72-year-old Muslim resident who wears a long white beard and a crumpled skull cap, says he, too, will always vote for Congress. “I voted for BJP once and gave them the opportunity to run the country,” Yasin says. When the Gujarat riots unfolded under a BJP-led government, he changed his mind and went back to Congress. When asked about the scandals that have faced the Congress government in recent years, he is more forgiving. “Who isn’t corrupt?” he asks. “Everyone makes mistakes.” 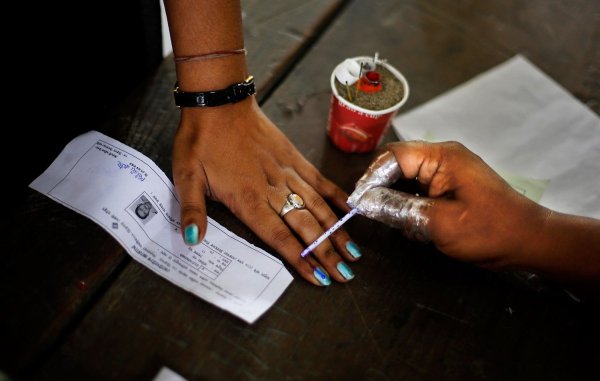 The World's Largest Democracy Heads to the Polls
Next Up: Editor's Pick