The Impeachment Inquiry Is Draining the White House’s Power

President Donald Trump is supposed to be the man who could shoot somebody in the middle of Fifth Avenue without losing any political support. But the threat of impeachment is constraining the President’s power in surprising ways. As defiant witnesses provide damning testimony in the House inquiry, Republicans are increasingly seeking shelter from unrelated scandals. The result–a spreading weakness in the West Wing–has driven increasingly erratic behavior by Trump, according to those close to him inside the White House and outside of government.

Examples of Trump’s diminished power aren’t hard to find. A series of government officials have defied the White House’s Oct. 8 edict that the Administration would not comply with the impeachment inquiry. Most damaging so far was the Oct. 22 testimony of acting U.S. Ambassador to Kiev William Taylor tying Trump to the alleged quid pro quo at the heart of the Ukraine scandal.

Amid the parade of defiance by public servants, Republican politicians are showing signs of turning on Trump. On Oct. 19, some GOP legislators sent the President a message that they wouldn’t defend his decision to hold the next G-7 summit at his resort in Doral, Fla., a senior White House official says. Already angry over Trump’s decision to withdraw American troops from Syria, the lawmakers were taking fire on too many fronts, they told the White House. So Trump did what he’s rarely done as President: he reversed himself.

It wasn’t pretty. Taking to Twitter that night, Trump blamed “both Media & Democrat Crazed and Irrational Hostility” for the climb down. But it’s what he sees as a lack of Republican resolve that is really bothering him. During an Oct. 21 Cabinet meeting, Trump went on a wide-ranging on-camera rant that kept the press in the Cabinet Room for 72 minutes. “This is a phony investigation,” Trump told the journalists. “And Republicans have to get tougher and fight.” After reporters were escorted out, Trump railed about the political limitations he feels are being imposed on him by those in his own party.

The exasperation is mutual. Many congressional Republicans are tired of seeing Trump tweet about everything except their agenda. Impeachment is consuming the political oxygen in Washington, and GOP leaders are concerned that the White House doesn’t know how to manage it, according to several high-level Republican aides.

Trump’s own aides aren’t helping. In a jaw-dropping press conference on Oct. 17, acting White House chief of staff Mick Mulvaney sought to rebut Democratic accusations that Trump had improperly pressured Ukrainian President Volodymyr Zelensky to launch investigations that would benefit Trump politically. Instead, Mulvaney acknowledged that U.S. military aid to Ukraine had been held up to press the country to cooperate with one such probe. Mulvaney later reversed himself and denied there was a quid pro quo.

Democrats are looking for ways to widen the rift that such performances are opening among Republicans, and the House inquiry is giving them plenty to work with. Taylor painted a devastating portrait of U.S. foreign policy hijacked for domestic political purposes. In a detailed 15-page statement, he described a “highly irregular” back-channel policy operation “guided by” Trump’s personal lawyer, Rudy Giuliani. One member of that operation, Ambassador Gordon Sondland, told Taylor that Trump had insisted Zelensky publicly commit to investigating the Bidens and the 2016 election before he would release $392 million in military aid, according to Taylor’s testimony.

Taylor cited 50 years of public service, from his time as an infantry officer with the 101st Airborne in Vietnam to his visit to the front lines of Ukraine’s ongoing war with Russia in July, in welcoming the chance to comply with the House subpoena. It was key, he said, to explain “the profound importance of Ukraine” to American security and to show why “holding up security assistance for domestic political gain was ‘crazy.'” Four other currently serving Trump Administration officials have complied with congressional subpoenas, and more are on the way.

Will such testimony ultimately end Trump’s hold on power? Hill Republican support for the President may be showing signs of softness, but 20 GOP Senators would have to defect to remove him from office in a Senate trial. Some 93% of Republicans don’t believe Trump should be impeached, according to an Oct. 21 poll by the nonpartisan Public Religion Research Institute, and if those numbers hold, few if any Senate Republicans can be expected to defy their base and likely end their political careers.

But Democrats are hoping the ongoing inquiry, and Trump’s own missteps, will take him down, one way or another. “Most Americans would say, if you told a foreign leader to go investigate dirt on my opponent, that’s bad enough,” says Representative Ro Khanna, a California Democrat. But with a little more than a year before the 2020 election, voters, not Congress, may be the ones left to limit Trump’s power.

–With reporting by ALANA ABRAMSON and PHILIP ELLIOTT/WASHINGTON 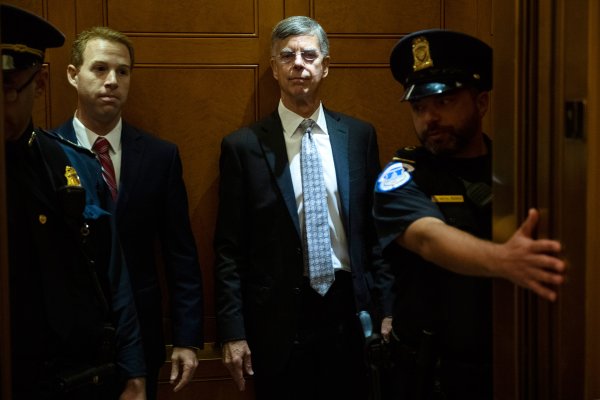 What Taylor's Testimony Means for Impeachment
Next Up: Editor's Pick