Remains believed to be those of missing three-year-old Kamille “Cupcake” McKinney have been found, and two suspects in her death are in police custody, Birmingham Police Chief Patrick Smith confirmed at press conference Tuesday night.

A body believed to be Kamille’s was located in a dumpster that had been taken to a Birmingham landfill, Smith said. Investigators had been examining garbage pickups around Birmingham, Ala., and gone through around 12 tons of trash over the course of several days. Smith did not offer details as to why the police had zeroed in on trash and landfills.

Smith said the police intend to obtain warrants for kidnapping and capital murder against 39-year-old Patrick Stallworth and his 29-year-old girlfriend, Derick Brown. The two had previously been questioned as part of the investigation.

Stallworth’s lawyer did not immediately respond to request for comment. The Jefferson County Public Defender’s Office, which represents Brown, said it has no comment at this time. Attorneys for both have previously said they are innocent and had no involvement in Kamille’s kidnapping.

“From what we’ve been able to tell there’s no connection or relationship between the individuals and Kamille’s family,” Smith said.

“We believe that this was something that they thought about and acted upon, and they saw an opportunity to take a young child, which they did,” Smith responded when asked about the suspects’ potential motive. “And our further investigation will reveal whatever actions were taken.”

Kamille went missing around 8:30 p.m. Oct. 12 while attending a birthday party at Tom Brown Village, a public housing community in Birmingham. AL.com reported that children at the party saw a man get out of an an SUV and put Kamille in a car. Police later released surveillance video of Kamille playing with a friend before being approached by an adult with a limp. Smith would not say if the individual on the tape is either of the individuals in custody.

Authorities issued an Amber Alert and, along with the Federal Bureau of Investigation, launched an investigation. According to AL.com, hundreds of false sightings of Kamille poured in as the city searched for the child. Local, state, and federal law enforcement were involved in the “massive” search efforts. Governor Kay Ivey issued a statement and offered a $5,000 reward. Crimestoppers then offered a $20,000 reward.

“There were a ton of people who were involved who wanted to see this young child come home,” Smith said, thanking everyone who took part in the investigation. “This young child has touched the nation.”

McKinney’s parents, April Thomas and Dominic McKinney, had asked the public to help look for their daughter. Speaking out on local news channel WKRG5 on Oct. 5, Thomas had offered an emotional plea: “Just bring my baby back, why did you choose her.” 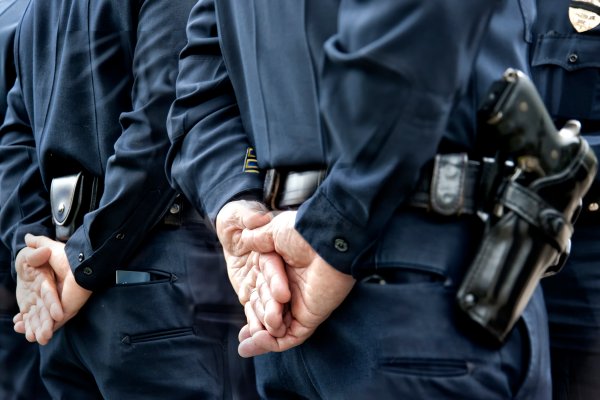 NYPD Officer Shot in Bulletproof Vest After 'Violent Struggle'
Next Up: Editor's Pick