Pro-Russian protesters set a barbed wire on a barricade outside the SBU state security service in Luhansk, in eastern Ukraine, April 10, 2014.
Shamil Zhumatov—Reuters
By Per Liljas

The ultimatum has a day left to run. Separatists are openly calling on Russian President Vladimir Putin to intervene, while a popular local politician has proposed that the protesters be given amnesty as a prelude to negotiations.

Meanwhile, Russia maintains that there is no reason to worry about its troop build-up on Ukraine’s borders — a move that has drawn strong condemnation from the United States and NATO, who are considering troop deployment in Eastern Europe.

According to U.S. estimates based on satellite imagery, there are up to 40,000 Russian troops along Ukraine’s eastern border. Geoffrey Pyatt, the U.S. ambassador to Ukraine, illustrated the military build-up with images posted on Twitter.

The fresh standoff began Sunday night as hundreds of demonstrators seized government buildings in Kharkiv, Donetsk and Luhansk, chanting “Russia! Russia!” and calling for “peacekeepers” to be sent in from across the frontier. In Donetsk, protesters inside an 11-story state building have even proclaimed an independent republic.

Washington has warned that Russia may be orchestrating a Crimea-style takeover of eastern Ukraine, following the organized push through police lines on Sunday — something Moscow denies.

Tensions have run high since November, when the refusal by then Ukraine President Victor Yanukovych to sign a trade agreement with the E.U. led to violent clashes between protesters and government forces that claimed over 100 lives.

The current action in eastern Ukraine is strongly reminiscent of the takeover of state buildings in Crimea by pro-Russian activists in February, which led to the Russian annexation of the Black Sea region. 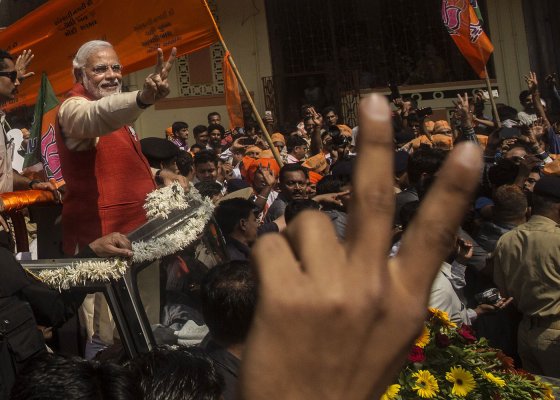 India's 'Bachelor' Politician Is Technically Married
Next Up: Editor's Pick