By Katie Reilly and Amy Gunia

The House Ethics Committee announced on Wednesday that it has launched an investigation into Rep. Katie Hill over allegations that she had an improper relationship with a congressional staffer, which would be an ethics violation.

The panel, which cited “public allegations” that the California Democrat “may have engaged in a sexual relationship” with an aide, said that the investigation in itself does not signify that any violations had occurred.

Hill, who was elected in 2018, denied the relationship with the congressional staffer. But, in a letter to supporters on Wednesday night, Hill admitted to having an “inappropriate” relationship with a female member of her campaign staff—a separate relationship from the one the Ethics Committee is investigating.

“During the final tumultuous years of my abusive marriage, I became involved in a relationship with someone on my campaign,” Hill said in the letter. “I know that even a consensual relationship with a subordinate is inappropriate, but I still allowed it to happen despite my better judgement. For that I apologize. I wish nothing but the best for her and hope everyone respects her privacy in this difficult time.”

The ethics investigation stems from a report first published in conservative news site RedState that Hill began an affair with Graham Kelly while he was serving as her campaign finance director. Hill called the report “absolutely false.”

Kelly is currently Hill’s legislative director. The U.S. House official code of conduct prohibits members of Congress from engaging in sexual relationships with their congressional aides.

In a Tuesday statement, Hill called the report a “smear campaign” by “Republican operatives” and an “abusive husband.” Hill said that U.S. Capitol Police are investigating how a nude photo of her was distributed and published online without her consent.

“I am going through a divorce from an abusive husband who seems determined to try to humiliate me,” Hill, who represents California’s 25th district, said in the statement. “I am disgusted that my opponents would seek to exploit such a private matter for political gain. This coordinated effort to try to destroy me and people close to me is despicable and will not succeed. I, like many women who have faced attacks like this before, am stronger than those who want me to be afraid.”

Hill’s husband, Kenny Heslep, who filed for divorce in July, could not immediately be reached for comment on Wednesday.

“I am saddened that the deeply personal matter of my divorce has been brought into public view and the vindictive claims of my ex have now involved the lives and reputations of unrelated parties,” Hill said.

RedState also published photos of Hill and a woman who they allege had been involved in a polyamorous relationship with Hill and Heslep. The unnamed woman was, RedState reported, a staffer on Hill’s campaign. In one image, Hill is nude and appears to be brushing the woman’s hair. Hill has not confirmed whether the woman in these photos is the staffer she engaged in an “inappropriate” relationship with.

Hill said she notified U.S. Capitol Police about the nude photo and said they were investigating “potential legal violations of those who posted and distributed the photos.” A Capitol Police spokesperson said Wednesday that they do not comment on ongoing investigations.

Write to Katie Reilly at Katie.Reilly@time.com and Amy Gunia at amy.gunia@time.com. 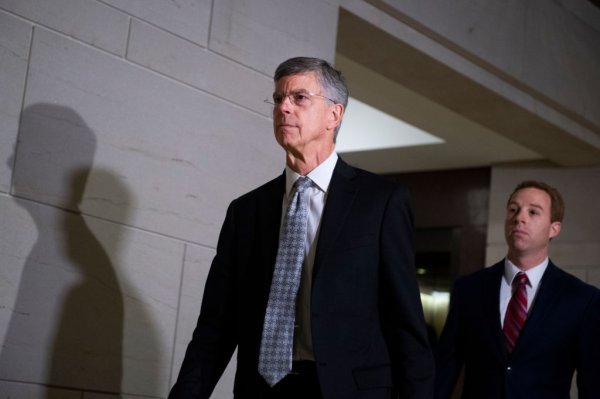