The suspect whose murder case was used as justification to introduce an extradition bill that triggered months of protest in Kong Kong was released from a Hong Kong prison on Wednesday morning, amid a diplomatic row with Taiwan over what to do with him next.

Speaking outside the prison, where he had been serving a sentence on money laundering charges, Chan Tong-kai, 20, bowed and apologized to the people of Hong Kong and the victim’s family.

Chan confirmed his plans to surrender to authorities in Taiwan, where he is accused of murdering his pregnant girlfriend. “I am willing to turn myself in for my impulse, the wrong things I’ve done, and serve sentence and be tried in Taiwan.”

He left the prison in a white van, accompanied by an Anglican priest who had been visiting him in prison. It is not yet known when Chan plans to return to Taiwan.

His release has sparked a dispute between Hong Kong and Taiwan on how to handle his surrender. In the early morning hours Tuesday, the Hong Kong government issued a statement rejecting Taiwan’s request to send officials to Hong Kong to escort Chan back to Taipei. Hong Kong wants Chan to travel to Taiwan himself and turn himself in informally.

At stake is the hugely sensitive issue of Taiwan’s status. Beijing regards the island as a renegade province; self-governing Taiwan sees itself as a sovereign nation.

If Hong Kong were to allow Taiwanese law enforcement officials to land and take custody of Chan, it could be seen as a de facto extradition agreement with a foreign power, and thus a tacit recognition that Taiwan is not part of the ‘One China’ that Beijing insists it is.

Hong Kong’s leader, Chief Executive Carrie Lam, used Chan’s murder case to justify the fast-track introduction of a bill that would have allowed the transfer of criminal suspects to jurisdictions where Hong Kong did not have extradition agreements, including Taiwan but more controversially mainland China.

The proposed legislation was met with mass opposition in Hong Kong, after critics argued that Beijing would use the measure to round-up its political opponents in the semi-autonomous territory. A series of peaceful mass marches beginning in June morphed into frequent, violent protests, with protesters now calling for greater political freedom and repudiating Beijing’s sovereignty over the former British colony.

The extradition bill is expected to be formally withdrawn by the city’s legislature on Wednesday. 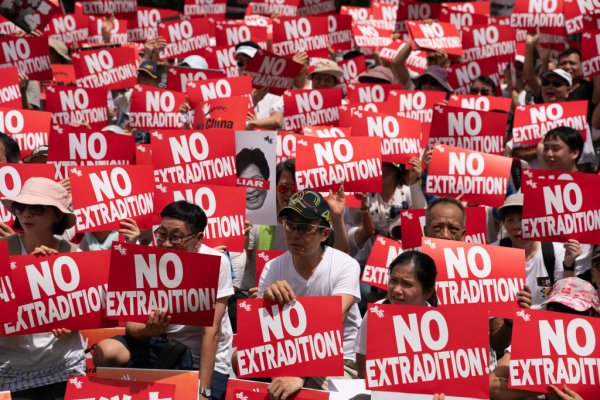 Hong Kong and Taiwan Clash Over Murder Suspect
Next Up: Editor's Pick