Prince William 'Worried' About Harry After Interview About Mental Health

Prince William is “worried” about his brother after he talked about his mental health in a TV documentary, a Kensington Palace source told the BBC on Tuesday October 22.

BBC Royal correspondent Jonny Dymond said he heard from one “very good source” that Prince William was “furious” with his younger brother for doing the interview, in which he and his wife Meghan Markle, 38, spoke out about their struggle to live under a global spotlight. One other source from Buckingham Palace told BBC they hadn’t seen any such fury and that the Duke of Cambridge was clearly “worried” about his brother, and hoped Harry and his wife Meghan “are all right.” There was a view that the couple were “in a fragile place,” the palace source added.

During the hour-long ITV documentary Harry and Meghan: An African Journey Prince Harry, 35, described his mental health and the way he deals with the pressures of his life as a matter of “constant management.” He also addressed the rumors of a rift between himself and his older brother, the “majority” of which “are created out of nothing,” he said.

“We’re certainly on different paths at the moment […] I’ll always be there for him and as I know, he’ll always be there for me. We don’t see each other as much as we used to because we’re so busy but I love him dearly,” he said in the program that aired in Sunday in the U.K. and will air in the U.S. on Wednesday, October 23, at 10 p.m. ET, on ABC.

Phil Dampier, author of Royally Suited: Harry and Meghan In Their Own Words told The Scotsman, “There’s no doubt the Queen and other royals are very worried about the direction Harry and Meghan are taking and it’s very serious.” A spokeswoman for Kensington Palace, however, declined to comment on the reports.

The royal brothers previously campaigned together to raise awareness about mental health. In May this year, the Cambridges and the Sussexes teamed up to launch a text messaging service “Shout” for those experiencing a mental health crisis. The couples later announced their charitable foundation would split, but vowed to carry on working together on issues like mental health. 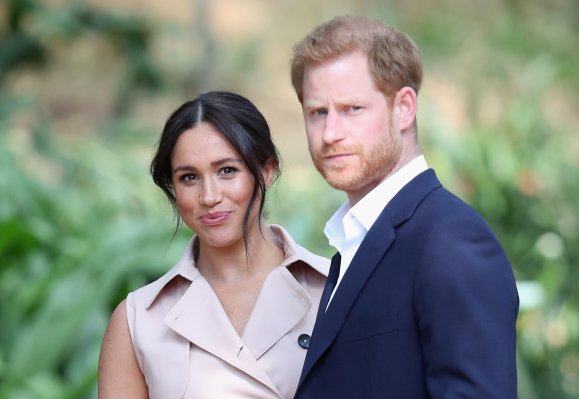 Prince Harry Appears Close to Tears During Speech About Meghan Markle, Baby Archie at Charity Event for Sick Children
Next Up: Editor's Pick