Taiwan appears to have backed down in an escalating dispute with Hong Kong over the fate of a murder suspect, whose case was used as justification for the introduction of an extradition bill that ignited protests more than four months ago in Hong Kong.

Chiu Chui-cheng, vice-chairman of the Mainland Affairs Council, said that Taiwan officials had sent Hong Kong authorities a letter asking for their assistance in bringing the suspect and his confession back to Taiwan, reports Hong Kong’s South China Morning Post newspaper.

Chan Tong-kai is being released from jail in Hong Kong on Wednesday, after serving a sentence for money laundering. Local media reported Monday that his offer to surrender himself to authorities in Taiwan, where he is accused of murdering his pregnant girlfriend, was deemed insufficient by the Taiwanese, who insisted that formal talks were required to accept him within a legal framework.

The Hong Kong government had responded with a statement saying that the case should be handled informally, and that Taiwan’s acceptance of Chan should have nothing to do with whether or not there is a mechanism in place for criminal judicial assistance, but was instead a matter of “common sense.”

Experts say the complicated relationship between Hong Kong, Beijing and Taiwan is behind the standoff.

“If Taiwan were to accept, Taipei would implicitly accept [its] position as similar to Hong Kong, as being a part of China,” Willy Lam, an adjunct professor at the Chinese University of Hong Kong’s Center for China Studies tells TIME. Taiwan, he says, only wants to accept Chan if it is done under a specific agreement—in effect recognizing Taiwan as a sovereign entity and not the renegade province that Beijing says it is.

“There’s credible evidence that the crime was committed,” says Gregory Gordon, a law professor at the Chinese University of Hong Kong

“I think it would be problematic for this person not to face justice because of political issues,” he tells TIME. “It’s important for the parties to see that a heinous crime was committed, and the person who committed that crime should face justice. If he walks out a free man in Hong Kong, justice is not done in a brutal murder case—that’s not a good result.”

Taiwan’s upcoming January presidential election may also be playing a part in Taiwan’s tough stance on the issue. Lam says that Taiwan’s President Tsai’s popularity has shot up dramatically since the Hong Kong protests kicked off in June.

“President Tsai Ing-wen is reluctant to give up the benefits she has reaped from Hong Kong’s protest movement the past four months,” Lam says.

According to the South China Morning Post newspaper, Chan admitted to killing his girlfriend and disposing of her body while on a trip to Taiwan in February 2018. She had told Chan prior to the trip that she was pregnant, but while in Taiwan told him that the father of her unborn child was her ex-boyfriend, the Post says. Chan fled home to Hong Kong after the incident. Authorities in Hong Kong say they do not have enough evidence to charge him with the murder.

Hong Kong’s leader, Chief Executive Carrie Lam, used the case to justify an attempt to rush through a bill that would have allowed the transfer of criminal suspects to jurisdictions with which the territory has no extradition agreement. But the proposed legislation would have also allowed suspects to be sent to mainland China, which raised alarm bells with Hongkongers, who worried that the law would be used by Beijing round up dissidents and critics of the communist regime.

Opposition to the proposed legislation—which the government suspended in June and which Chief Secretary Cheung told media will be formally withdrawn at a meeting of the city’s Legislative Council on Wednesday—triggered mass protests in June. The protests have since snowballed into push for greater political freedom and a repudiation of Beijing’s sovereignty over the former British colony.

Adjunct professor Lam says that if Taiwan accepts Chan without putting a formal agreement in place, “by some interpretations, it might be construed as accepting the basic rationale of the extradition bill.”

Hong Kong’s Chief Executive said it is a relief that Chan has offered to turn himself in, and that she hopes his decision will help calm the situation in the city. 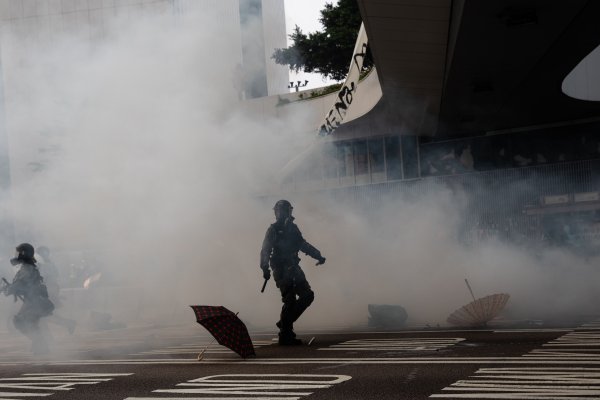 Hong Kong's Use of Emergency Regulations Must Be Challenged
Next Up: Editor's Pick