The Federal Government Has Lost Our Trust. It Could Learn Something From Our Cities

Former Maryland Governor Martin O'Malley speaks during the third day of the Democratic National Convention at the Wells Fargo Center in Philadelphia, PA, on July 27, 2016.
Riccardo Savi—Riccardo Savi/Sipa USA
Ideas
By Martin O'Malley
Martin O'Malley is the former governor of Maryland and former mayor of Baltimore. His book Smarter Government: How to Govern for Results in the Information Age will be published by Esri Press in November 2019.

Today in America, public trust in our national government is the lowest it’s been in more than two decades. And, according to Gallup polling, the decline cannot be attributed to just one political party or just one president.

In a time of political polarization, this is a pretty stunning development.

In the words of songwriter Stephen Stills, “there’s something happening here…” and it’s not all bad. In fact, the dawn of a new way of governing might just hold the key not only to saving our own democracy, but to saving our children’s planet.

Thanks to the rapid deployment of commonplace technologies like Geographic Information Systems (software that sorts and displays massive amounts of data on maps down to a very granular level) and the fast-evolving Internet of Things (the expanding network of objects, sensors, vehicles, appliances and phones that are all connected to the internet), we now have tools to measure, model and map dynamic human systems that unfold across our natural and built environments. No prior generation has ever had such a power for understanding and action.

For 15 years I surfed the curl of this new wave in governing — first, as Mayor of Baltimore and then as Governor of Maryland. But what earned our Administrations accolades was not some theoretical or technical insight, it was nation-leading results. Maryland was #1 schools in America, #1 in technology and entrepreneurship, #1 in household median income. We did this by implementing new socio-technical habits: habits of management, habits of leadership, habits of democratic governance.

Instead of just measuring budget inputs annually, we started measuring for results — every day. Was the city becoming dirtier and more dangerous, or were the combination of actions we were taking making it cleaner and safer? Was the Chesapeake Bay becoming sicker every year, or were we taking new actions to measurably reduce pollution flows? Sure, we submitted a balanced budget every year, but for the 364 days in between, we measured and drove leading actions in pursuit of clearly defined goals with deadlines. We set a regular cadence of monthly stakeholder meetings for collaboration and accountability. We kept a compelling scoreboard focused on leading actions. And we did so with a degree of openness and transparency never possible before.

Whether it was putting the City of Baltimore on a path for the biggest 10-year crime reduction of any major city in America or reversing a 300-year decline in the health of the Chesapeake Bay, we used the data, the map and a new collaborative method to answer the ongoing daily question, “Is what we are doing — as a government of the people — working or not?” And if not, “What can we do differently to achieve better results?”

While the old ways of governing were closed, hierarchical, bureaucratic and, too often, driven by ideology, this new way of governing is open, collaborative, interactive and fundamentally entrepreneurial. But, most important in this time of diminished trust in democracy the world over, it delivers better, faster results in more open and transparent ways.

This new way of governing is at the heart of the rise of Smart Cities across the globe. But states and nations must soon follow suit. Or they will fail and they will fall. Democracy is a great idea, but only if it actually works. The true measure of nation’s wealth is its ability to solve problems that serve human needs.

This is not the story of emerging technologies. It is instead the story of new way of solving human problems. It is the story of human action taken to scale in the face of daunting challenges, and it is a clarion call — in a time of diminished trust — for a renewal of faith in our own democracy. For behind every statistic on a map, there are real people in real places: a new father struggling to find a job, a mom working night and day to give her child a better life; the urgent human struggle to restore the land, the air and the waters upon which all of our lives depend.

There is a balance — a symmetry if you will — between how well we govern ourselves and how much we are capable of trusting one another. They can reinforce each other, build each other up or drag each other down.

Trust is a precious and essential thing for the life of a democracy. When trust dies, democracy dies. But the absence of trust in America today is not a matter of cosmic or global forces beyond our control. It is a matter of choice.

The choice is ours. 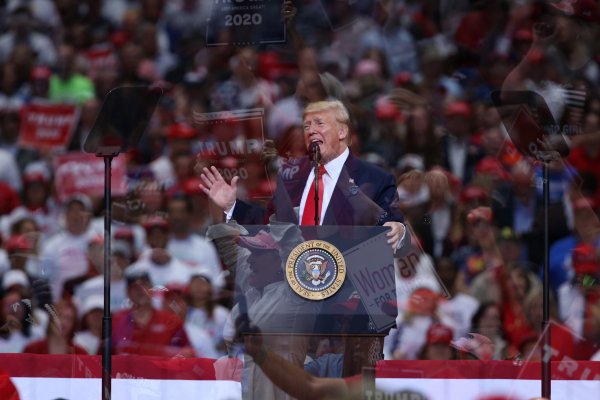 If You Didn’t Already Think Trump Was Unfit for Office, Syria and Ukraine Should Change Your Mind
Next Up: Editor's Pick