A Syrian teenager was allegedly berated with Islamophobic slurs and assaulted in an attack the San Diego Police Department is now investigating as a hate crime.

The unidentified 17-year-old, who police have confirmed to TIME is a refugee, was riding a trolley car on the San Diego Metropolitan Transit System last Tuesday when a man approached him and asked him where he was from. Specifically, police say, the man asked if he was Mexican. When the teen told him “No, I am Arab,” the man called him a racial expletive and then attacked him. The teen suffered injuries to his face.

The suspect, who police describe as a Hispanic male in his 20s, then fled the trolley. Police say they have surveillance footage of the incident, but are not yet releasing it to avoid “jeopardizing” their investigation, which they describe as still in its early stages.

Homayra Yusufi, Deputy Director at the Partnership for the Advancement of New Americans (PANA), a non-profit supporting refugee resettlement,, tells TIME that PANA has been providing continued help to the victim and his family, who have been in the United States for 4 years. Yusufi says that the teen is still afraid to go to school following the attack.

“He’s just a high schooler, so he is really feeling very fearful at this moment,” she tells TIME. “He is scared to get back on the trolley, which is his main form of transportation. We’ve been providing rides for him to and from school. His family is concerned because they want to make sure that he continues to do well in school.”

Other members of the Muslim community in San Diego have reached out, “telling me ‘a similar thing happened to me,'” Yusufi says, following the publicity around the assault and a previous incident in which three Muslim women wearing hijabs were attacked in San Diego’s Little Italy neighborhood. Police arrested 50-year-old Kyle Allen after he shoved the women and told them to “go back to [their] country.”

“As individuals who are Muslim and are feeling Islamophobia in this country — a lot of individuals face hate speech and crimes, [but] most of them are too afraid to come forward,” Yusufi explains.

According to data from the San Diego Union-Tribune, hate crimes in San Diego have been on the rise in recent years. 437 hate crimes were reported in San Diego County between 2014 and 2018. These numbers are in line with national trends — according to the FBI’s most recent report on hate crime statistics, in 2017 there were 7,175 hate crime incidents reported, up over a thousand from 6,121 the year before. 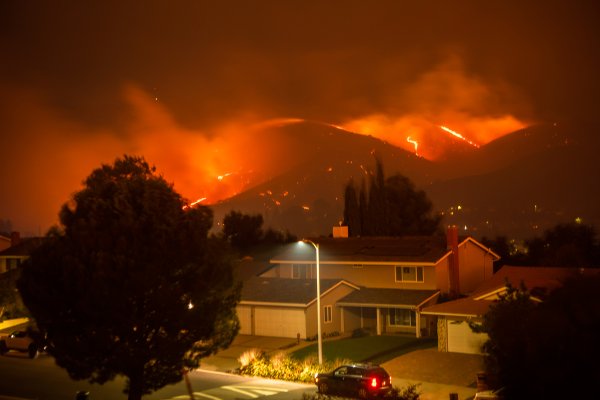 3 People Confirmed Dead and 100,000 Residents Evacuated in Los Angeles. The Latest on the Wildfires Raging Across California
Next Up: Editor's Pick