Maleficent: Mistress of Evil Doesn't Deliver Much Evil—But Angelina Jolie Is Dazzling All the Same

Angelina Jolie’s goth-glamour vixen, the dark, glittering center of Maleficent: Mistress of Evil, is, disappointingly, hardly evil at all. She keeps a watchful eye over the natural, and not so natural, world and its wildlife; she’s a doting adoptive mother to teenage Princess Aurora (Elle Fanning); and when she’s invited to a fancy dinner at a neighboring kingdom, she works hard to keep her fangs from showing when she smiles. At worst, she’s a complex creature who’s been shaped by her past suffering and who simply does not suffer fools. But then, as a title, Maleficent: Mistress of Indeterminate Motives just doesn’t swing, does it?

Perhaps it doesn’t matter so much that Maleficent is more misunderstood than mal. The pleasures of this sequel to the 2014 revisionist fairytale Maleficent lie mostly in looking, at the psychedelically verdant computer-generated backdrops, at the spun-by-spiders and wrought-by-wizards costumes and especially at Jolie herself, the film’s most regal spectacle. (Jolie is a Contributing Editor for TIME.)

The plot is minimally taxing and essentially uninteresting, offering the sort of empowerment-lite message Disney specializes in: In the movie’s early minutes, Fanning’s Aurora, her coloring as delicate as a macaron come to life, meets her beau, Prince Philip (Harris Dickinson), as he’s trekking in the woods. He’s on his way to propose to her. She says yes. Hooray! But Maleficent is none too pleased. She likes earnest young Philip well enough, but she has little faith in romantic love—her backstory of having been jilted as a young woman is central to the earlier film. And she gets a bad vibe from Philip’s parents, especially his mother, Queen Ingrith (a marvelously calculating Michelle Pfeiffer). Ingrith and her husband, King John (Robert Lindsay), rule the next kingdom over, and Maleficent sees them as potential enemies of the territory she and Aurora guard so fiercely, the moors. But Aurora pleads with her to make a good impression on the future in-laws: Maleficent agrees to go to their castle for dinner, even donning the black veil Aurora urges her to wear, an almost comically futile attempt to disguise the chic but treacherous-looking ram’s horns that stretch skyward from her elegant noggin.

Needless to say, dinner is a disaster. The hosts accuse Maleficent of putting a spell on King John, and given her track record, it’s not an unreasonable assumption. More stuff happens. Maleficent ends up returning to her roots, discovering the place from which she came, populated by beings who are something like her, though not as powerful. Like her, they’re angry at humankind, though one of these extraordinary winged beings believes there’s a peaceful way forward: This is the wise Conall (played by the always-awesome Chiwetel Ejiofor). He’s the epitome of hippie chic with his swervy horns, ultra-long locs, and feathery, ebony wings.

Maleficent: Mistress of Evil, directed by Joachim Rønning (who, with Espen Sandberg, previously co-directed the 2012 historical adventure Kon-Tiki and the 2017 Pirates of the Caribbean: Dead Men Tell No Tales), hands over several important messages on a blackened silver plate: Be yourself. Learn to understand and accept those who aren’t exactly like you. True love can exist, but don’t compromise. And so forth. Seriously, though? See it for the inventive, elaborate costumes (designed by Ellen Mirojnick), for the tiny—albeit slightly creepy—mushroom people and the miniature fairies wearing dandelion tutus, and for Jolie: Her prosthetic cheekbones are a teasing riff on her everyday ones—they crest to a smooth but sharp edge, like the invention of an obsessive Italian industrial designer. Her poison-green eyes, rimmed with a dark halo, are unnervingly unblinking, yet you can’t turn away. Her little pointy overbite is adorable. It’s as if she’d poured the essence of a purring leopard into her performance. Evil? Not so much. But majestically, joyously feral. 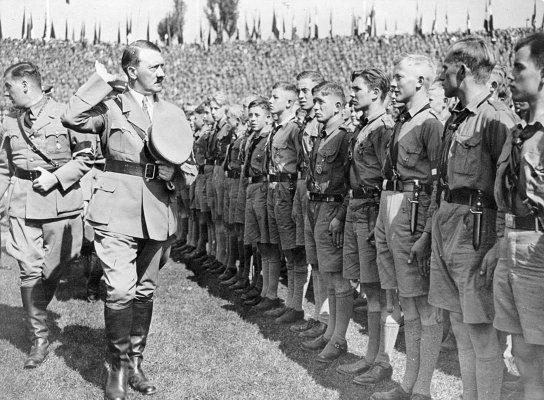 The History Behind 'Jojo Rabbit' and What It Was Really Like to Be in the Hitler Youth
Next Up: Editor's Pick