How This Pastor of a Megachurch Is Fueling Ebola Conspiracy Theories

Pastor Jules Mulindwa runs a rollicking Congolese megachurch complete with flashing lights and a live band. Walk into Sunday services and the applause is startling. Don’t even bother shouting into the ear of the person next to you as the MC — wearing a ruffled white tuxedo shirt beneath a royal blue suit — whips the crowd into an ecstatic fervor. Your neighbor is never going to hear you.

The wooden stage at the front of the Cite de Refuge church is painted the sky blue of the Congolese national flag and from it, the faithful shout long-winded testimonials into a microphone. “Those people like Ebola. They’re becoming famous and successful from it,” hollers a middle-aged male parishioner wearing a black suit, near the end of an 8-minute ramble. “They can keep it. Ebola will never reach this church,”

For more than a year, the Ebola virus has ravaged communities in the far east of the Democratic Republic of Congo (DRC) – the provinces of North Kivu, Ituri, and, most recently, South Kivu — areas already wracked by dire poverty, more than 130 armed groups, widespread violence, and mass displacement. When the outbreak was declared in August 2018, it was classified as a Grade 3 Emergency, the World Health Organization’s most dire designation for public health crises. In mid-July, after the first confirmed case of Ebola Virus Disease surfaced in North Kivu’s capital Goma — a city of nearly two million people bordering Rwanda and home to the Cite de Refuge — the WHO declared it a Public Health Emergency of International Concern. It is now the second-largest Ebola outbreak in history with 3,220 reported cases and 2,150 deaths.

Mention Ebola in Goma and you’ll hear a riot of rumors, half-truths, and conspiracy theories about the disease: that it doesn’t exist; that it’s been imported for financial gain; that it’s being used to kill people as part of an organ theft plot. A study published in September in the journal PLOS One found that 72% of respondents were dissatisfied with or mistrustful of the Ebola response and 12% believed that the disease “was fabricated and did not exist in the area.”

Misinformation is a key factor in making the outbreak so difficult to stamp out, say experts. “One of the reasons why things look so bad is the great suspicion of authorities: a great suspicion that this outbreak was propagated, that it’s not real, that it’s a big hoax,” says Anthony Fauci, the director of the U.S. National Institute of Allergy and Infectious Diseases. “It’s made controlling Ebola very problematic.”

Long an incurable disease, Ebola may someday be preventable and treatable thanks to recent drug advances. Still, with an almost 70% fatality rate during this current outbreak, Ebola continues to be obscenely lethal. To survive it, early medical intervention is key. But Pastor Jules Mulindwa, a compact man with a receding hairline and a thin mustache, has his own protocol. While he doesn’t discount medical science, he doesn’t believe it’s necessary. Experts say that the new Ebola drugs – known as REGN-EB3 and mAb114 – are the first clearly effective treatments for Ebola, but Pastor Jules promotes a different cure: Just bring a bottle of water from your home to his church and raise it high. “From the pulpit, I pray for the water. Then you drink it and you’ll be healed, even if you have Ebola,” he says.

Janine Kibwana, 32-years-old, an Ebola survivor and mother to five children sits inside her living room in Beni, north eastern Democratic Republic of the Congo on September 17, 2019.
John Wessels—AFP/Getty Images

In his cavernous Cite de Refuge, Pastor Jules is all smiles and bombast. He gets big laughs talking about rival preachers drinking lotoko — local moonshine that looks like water but tastes like gasoline. The crowd eats it up.

Armed Conflict Has Forced 661,000 People to Flee Their Homes During the Coronavirus Pandemic

At his home, the bombast remained, but the smiles were absent. He was getting a bad rap, Pastor Jules told me as we sat in the well-manicured courtyard of his large brick compound in a tony part of town along the shore of Lake Kivu. The son of a Pentacostal minister from Goma, Pastor Jules started his own church a decade ago. Now, he claims to have a huge congregation and an empire of 50 churches dotting the east of the Democratic Republic of Congo. Pastor Jules had become wildly successful (and seemingly wealthy), but the good fortune had won him lots of enemies. Jealous preachers and priests were spreading rumors about him. “They’re using Ebola to attack me,” he complained.

More than a year ago, according to local media reports, Pastor Jules prophesied an imminent end to the Ebola outbreak in North Kivu and decreed that it would never reach the city of Goma. (Ebola is still present and surfaced twice, resulting in four cases, in Goma this summer.) More recently, he has been accused of making claims that Ebola has been weaponized by the West to “exterminate Africans” and that healthcare workers are killing people and blaming it on Ebola. But Pastor Jules says local journalists are as bad as the religious leaders who are out to get him. “They are saying that I said ‘there is no Ebola,’ but I never said that,” he explained, wagging his finger my way.

According to Pastor Jules, the Ebola virus is real, but the outbreak has been prolonged by a vast conspiracy of local journalists, doctors, and healthcare providers who are all “working for Ebola,” he said. That is, they’re stoking the outbreak and working together to make money off it. The worst offender, he told me, is the World Bank. In fact, the World Bank pledged $300 million in grants and credits immediately after the WHO’s declaration of a global public health emergency. (The money is going to support the Congolese government, the WHO, a host of other United Nations agencies, and work programs to support the local economy.) “If the World Bank stops funding it, then Ebola will stop,” said Pastor Jules. For all his ire, however, Pastor Jules wasn’t entirely against the World Bank. He was, in fact, open to sharing in the $300 million for his role in “spiritually” fighting Ebola. “If they were serious, [healthcare workers] would get one part and, myself, I would get one part,” he told me.

Pastor Jules Mulindwa is far from alone in holding unfounded beliefs about Ebola. A study published in The Lancet in March, found widespread Ebola conspiracy theories in the region and a significant belief in misinformation about the outbreak. About 85% of those surveyed had heard statements about the outbreak being “fabricated for financial gains.” About 33% of respondents believed it.

Conducted in North Kivu in September 2018 – not long after the outbreak began – The Lancet survey found a profound lack of trust in government authority. Less than a third of those surveyed trusted local authorities—a statistic that would be dismal if not for the fact that just 2.1% trusted the national government. But this is hardly surprising in a region where various official agencies and powerful politico-military forces have been enmeshed in widespread corruption and violent atrocities. Effective government services are a rarity. An estimated 15.9 million Congolese suffer severe food insecurity and struggle to feed themselves daily and 7.5 million children are in need of humanitarian assistance, with millions suffering from malnutrition.

The Lancet study found that almost 90% of respondents heard the claim that Ebola does not exist and more than a quarter of respondents believed it. Similar numbers of people were told — and believed –that the disease was created in an effort to destabilize the region.

Other Ebola conspiracy theories seem equally widespread and are rooted in misunderstandings of correlations. Because of their fears and misconceptions about the disease, many victims avoid Ebola treatment centers until they are gravely ill – often too late for effective treatment – and die at the facility, thereby perpetuating the myth that the centers are the real threat. “There is a persistent belief that we are deliberately infecting people or even if people don’t believe it’s deliberate, they believe they will get the infection by going to the Ebola health center,” said Margaret Harris, a WHO spokesperson and medical doctor who responded to the West African Ebola outbreak of 2014-2016 in addition to the current one in Congo.

Historically, medical interventions have actually been part of the problem. During the first recorded Ebola outbreak – in a different part of Congo (then known as Zaire) – the infection was spread by poorly-trained Belgian nuns operating a rural clinic where they injected pregnant women with B vitamins and calcium gluconate. The practice was popular with patients but unnecessary and the widespread use of unsterilized syringes led to the deaths of large numbers of people.

Today in Congo, private and informal clinics run by local entrepreneurs continue the tradition of doing more harm than good, said the WHO’s Margaret Harris. “People running these clinics are often not doctors and nurses. They’re often people with no health training. While medical personnel don’t have all the answers, they at least would hopefully understand infection control practices,” she told me. “There are extremely poor infection control practices in many of these health clinics. Children are made to lay in beds previously occupied by Ebola patients and the beds have never been cleaned.” It’s potentially lethal and has hampered efforts to contain the outbreak.

Pastor Jules claims his Ebola cure is rooted in science. Sort of. “They say with Ebola, ‘you have to wash your hands,’” he told me. “My church has a 6,000-liter tank, so we always use water.” For reasons that are unclear, however, Pastor Jules says the water available at the Cite de Refuge church is not used to cure Ebola. Rather, it’s the water from his followers’ homes that he transforms into an Ebola cure through prayer.

Pastor Jules responded to my incredulity about his powers by claiming he was, in fact, an everyman. “I’m a normal guy, a simple guy,” he said before letting slip that curing Ebola might not even be his most impressive feat. He told me that he can, in fact, heal just about any malady – cholera, malaria, and during a summer crusade in Kindu, a city in Maniema province, blindness in three people. Then as if an afterthought he mentioned one more feat in a torrent of talk. “I also,” Pastor Jules said as if it were all in a day’s work, “resurrected two dead bodies.” 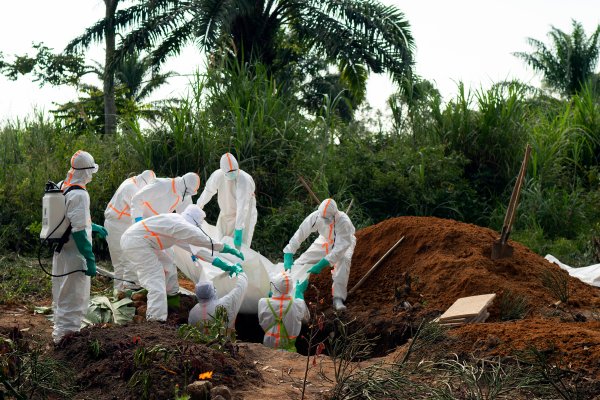