When Ronan Farrow’s bosses at NBC told him to stop reporting on Hollywood producer Harvey Weinstein’s decades-long pattern of sexual abuse, he turned to some of NBC’s most powerful journalists for advice: Tom Brokaw and Matt Lauer. It was only after Farrow left NBC and won a Pulitzer Prize for the story on Weinstein he eventually took to the New Yorker that he found out his subject had pressured executives at NBC to pull the story, even enlisting a friend at the National Enquirer to head an investigation into the sexual improprieties of Lauer for leverage. That, at least, is how Farrow characterizes it in his news-making new book, Catch and Kill. Farrow didn’t know it at the time, but his reporting would soon help kickstart the national reckoning with sexual misconduct that would bring both Brokaw and Lauer under fire. (In an internal memo, NBC executives denied obstructing Farrow’s reporting. Brokaw and Lauer have denied the allegations against them. Weinstein says he never engaged in nonconsensual sex.)

In the two years since the #MeToo movement took off, women have proven that speaking out can make a difference. But Catch and Kill tells two stories about the forces that stood in the way of Weinstein’s abuses coming to light: one of Farrow’s efforts to track down the producer’s accusers — and another of a shadowy network of powerful men from across media, politics and business who worked together to ensure their victims stayed quiet.

These men attended the same galas and employed the same lawyers to cover up their misdeeds. They pressured the same media outlets to discredit women who might accuse them and bury stories of wrongdoing. They leveraged their secrets against one another because they knew that if one was exposed, the others would be left vulnerable. Farrow weaves the two stories together to prove that money and power really do run the world. It’s a chilling revelation that further explains why even the most successful and influential of Weinstein’s victims could be silenced: The Hollywood super-producer had more than his own considerable resources at his disposal.

Farrow reprints emails exchanged between Weinstein (a major Clinton donor) and an editor from the right-leaning National Enquirer in which they discuss digging up dirt on women the producer suspects will speak out about his abuses — just one example Farrow uses to demonstrate how the men involved are often agnostic about politics, at least when it comes to protecting themselves. He also reports that David Pecker, who owned the National Enquirer until 2019, buried stories about sexual improprieties related to President Donald Trump leading up to his election in 2016. And the one time that Weinstein was investigated by the NYPD for sexual assault, he enlisted former New York mayor Rudy Guiliani — now an embattled Trump advisor — for help.

Catch and Kill shows how the same supporting players — lawyers, investigators and public relations specialists — appear over and over again with each new #MeToo accusation, layering on conflicted interests. At the suggestion of former Israeli Prime Minister Ehud Barak, Weinstein hired a group of ex-Mossad intelligence agents that call themselves Black Cube to surveil Farrow, New York Times reporters also working to expose the producer and Rose McGowan, an actor who would eventually accuse Weinstein of rape. Farrow reports that Weinstein’s lawyer, David Boies, who represented Gore in Bush v Gore, signed off on the contract with Black Cube to stop the Times story — even though Boies’ law firm represented the Times. Weinstein also recruited Lisa Bloom, who as the daughter of famed lawyer Gloria Allred touted her feminist credentials and represented accusers of Bill O’Reilly and Bill Cosby, to his legal team to help with damage control.

The connections stretch back decades. Weinstein employed the private investigators who worked for the Clintons when President Clinton was accused of sexual misconduct. And Farrow reports that the man NBC asked to disseminate statements denying that they buried Farrow’s Weinstein reporting and — later — Lauer’s improprieties, also worked to conceal John Edwards’ affair during his presidential campaign.

The reader comes away with the understanding that when a person speaks out, she faces not just men like Weinstein, but also a larger network that uses the same weapons to silence, intimidate and shame.

Catch and Kill is not the first book to document the #MeToo movement. In What Is a Girl Worth, former gymnast Rachael Denhollander writes about her decision to publicly accuse Larry Nassar. In Know My Name, Chanel Miller, previously known as Emily Doe in the case against “Stanford swimmer” Brock Turner, reveals her identity and what went into writing the powerful victim impact statement that went viral during Turner’s trial. And in She Said, Jodi Kantor and Megan Twohey, the New York Times writers who first broke the Weinstein story and shared a Pulitzer with Farrow last year, retrace their steps from one potential source’s doorstep to another.

What sets Farrow apart is his proximity to those in power. As the child of Mia Farrow and Woody Allen, Farrow was born into the spotlight and stayed there: For a time, he had his own show on MSNBC. He’s both a dogged reporter and an insider who can offer a glimpse into the halls of power.

He admits that his own connections allowed him to gather more material for a publishable story on Weinstein that many others before him, including famed New York Times reporter David Carr, could not. Farrow’s public profile was sometimes used against him: he writes that Weinstein argued to NBC executives that their reporter had an ax to grind because of his public family history — his sister Dylan Farrow accused their father of child sex abuse. (Allen has consistently denied the allegation.) But Farrow entered rooms that many other reporters could not, having once met Weinstein himself at an event thrown by Charlie Rose (another powerful man who lost his job after #MeToo allegations surfaced. Rose apologized for some of the interactions but denied others).

And Farrow’s position in Hollywood helped him gain unique access. While his competitors at the Times had to backchannel through people who knew people with ties to Hollywood, Farrow could tap resources and connections he had previously made. He already knew McGowan from his days working at the State Department. When she visited, his boss asked him to chat with her because he “spoke fluent actress,” a dismissive descriptor, for sure, but in some ways true. When Farrow reached out to McGowan years later while reporting his Weinstein story for NBC, she said she felt he would “get it” as both a “child of Hollywood” and as someone who, years before, had written an op-ed in defense of his sister.

To Farrow’s credit, he uses his privilege to elevate the voices of survivors like Brooke Nevils, who revealed her identity as the woman who accused Matt Lauer of rape for the first time in the book. (Lauer denies the allegations and says the incident was consensual.) So many of the conversations sparked by the movement put the bad behavior of men in the spotlight. Farrow understands that it’s important to remember who these stories are really about: the women who have risked everything to speak truth to power.

Farrow paints an unsettling picture of a tilted system. It’s especially discouraging when you consider that few wrongdoers have faced serious consequences. We don’t know yet what will happen in Weinstein’s criminal trial. Plenty of other men like him, aside from being fired and retiring in comfort, have yet to be held accountable for their actions. Statutes of limitations and iron-clad NDAs prevent many civil or criminal cases from moving forward. Our legal system has proven ill equipped to reckon with a single man’s wrongdoing, let alone a network of them and their enablers.

The connections between presidents, media moguls and spies described in Catch and Kill are stranger than fiction. As a novel, it would be a page-turner. As a reported piece of nonfiction, it’s terrifying. 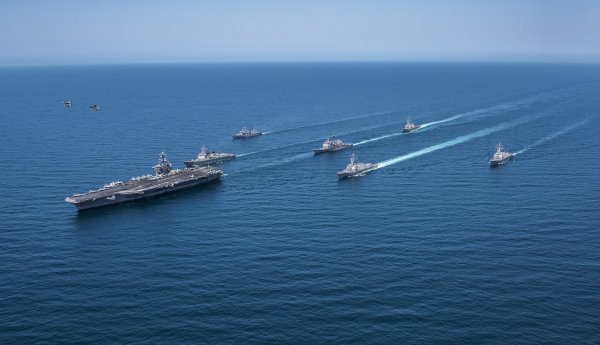 What We Can All Learn About Character From Great Admirals in History
Next Up: Editor's Pick