Some Democrats Want to Make the Supreme Court Bigger. Here's the History of Court Packing

One of the issues that the 2020 Democratic presidential candidates are generally split on is whether it could potentially be a good idea to add Justices to the U.S. Supreme Court or to nix justices’ life-long terms.

The subject came up directly at the Democratic primary debate on Tuesday night in the Columbus, Ohio, suburb of Westerville. Moderator Erin Burnett from CNN asked former Vice President Joe Biden about whether he would try to add Justices to the Supreme Court “to protect women’s reproductive rights” if Roe v. Wade is overturned.

Biden reiterated his opposition to what’s often called court packing — “We begin to lose any credibility the court has at all,” Biden said — while former Secretary of Housing and Urban Development (HUD) Julián Castro said he’s open to exploring the idea of term limits, and South Bend, Ind., mayor Pete Buttigieg proposed increasing the number of Justices from nine to 15, suggesting that there would be five seats that could only be filled with the unanimous agreement of the other Justices.

As TIME has previously reported, court packing has become “the next big Democratic idea,” as the Supreme Court now has more Justices appointed by Republican Presidents than Democratic Presidents — five versus four, respectively — and big cases on civil rights, immigration and guns are set to be decided in the middle of an already heated presidential election year.

The fact that the Constitution doesn’t require there to be nine Justices leaves open the possibility for change, but the Democratic Party does have a complicated history of court-packing attempts. Most famously, President Franklin Delano Roosevelt already — unsuccessfully — tried Buttigieg’s idea of expanding the bench to 15 Justices.

Roosevelt had just won a second term in 1936, and felt pretty invincible, viewing the landslide results as a sign that Americans favored his New Deal programs to address the Great Depression. But, while he may have felt like Americans were sold on the New Deal, the conservative-leaning Supreme Court was looking like a harder sell. Toward the end of his first term, the Justices struck down some New Deal laws that involved increasing government regulation of the economy and a New York state law ensuring minimum wage to women and children in the workplace. This situation raised concerns about whether New Deal social legislation was in jeopardy.

Just as he took radical action during the Great Depression to expand the federal government’s power through his New Deal legislation, FDR felt as if he could take radical measures to ensure those laws stayed on the books, even if it meant changing who was on the bench.

In February of 1937, he backed the Judicial Procedures Reform Bill of 1937, which — on the idea that the Judiciary branch’s caseload had also become overwhelming and it was falling behind — proposed allowing the President to add a Justice to the Supreme Court for every Justice over the age of 70, capping these kinds of appointments at six. And, FDR pointed out, he had precedent behind him for enlarging the bench: Since the Judiciary Act of 1789 had set up the first Supreme Court with six Justices, that number grew to seven in 1807, nine in 1837, and 10 in 1863. An 1866 law allowed the bench to be reduced to seven Justices, and there were eight in the late 1860s until a 1869 law changed the number back to nine, where it remained.

“A lowered mental or physical vigor leads men to avoid an examination of complicated and changed conditions,” read FDR’s statement accompanying the draft bill text sent to Congress on Feb. 5, 1937. “Little by little, new facts become blurred through old glasses fitted, as it were, for the needs of another generation; older men, assuming that the scene is the same as it was in the past, cease to explore or inquire into the present or the future.”

Still, the announcement came as a huge shock to the other branches of government and to the press. As TIME described the reaction back then in the Feb. 15, 1937, issue:

A Feb. 14, 1937, cartoon 'Do We Want A Ventriloquist Act In The Supreme Court?' depicts the five new judges that FDR could potentially point per his proposed court-packing plan as the President's puppets.
Fotosearch—Getty Images

Chief Justice Charles Evans Hughes wrote a letter slamming the proposal. In June 1937, the Senate Judiciary Committee sent the bill to the full Senate and recommended members vote it down, describing it as “an invasion of judicial power such as has never before been attempted in this country,” and arguing that “it is essential to the continuance of our constitutional democracy that the judiciary be completely independent of both the executive and legislative branches of the government.” That July, the Senate voted 70-20 to send the bill back to committee so it could be stripped of the court-packing provisions.

FDR went another route, attempting to “purge” the members of his own party who didn’t support his court-packing plan by backing the primary opponents of nine who hadn’t supported some of his New Deal policies. That effort also failed — all nine won re-election — and instead has become a teachable moment in terms of the limits of presidential influence in congressional races, especially when incumbents are running for re-election.

But the New Deal’s legacy arguably had already been set in the right direction while the court-packing bill was stuck in committee.

That spring, the Supreme Court handed down decisions that upheld a Washington minimum-wage law, as well as two landmark New Deal laws, the Social Security Act and the National Labor Relations Act (aka the Wagner Act). The conservative Justice Owen Roberts was initially expected to vote against them, but didn’t. His flip has been famously dubbed “the switch in time that saved nine.” In the years since, some scholars have speculated, as historian William Leuchtenburg has written, that “the pressure exerted by the court-packing bill may very likely have been influential.” Others scholars argue that’s a myth and that Roberts made up his mind much earlier, and that his vote can be viewed as consistent with some of his past decisions.

In any case, the stigma attached to the idea of expanding the bench remained.

Not even all of the Justices appointed by Democrats agree with the 2020 Democratic presidential candidates who want to expand the court. Ruth Bader Ginsburg (nominated by President Clinton in 1993) said in a July interview that FDR’s idea to add Justices was a “bad idea” in 1937 and still a bad idea eight decades later, because additional judges would make the court look “partisan.” 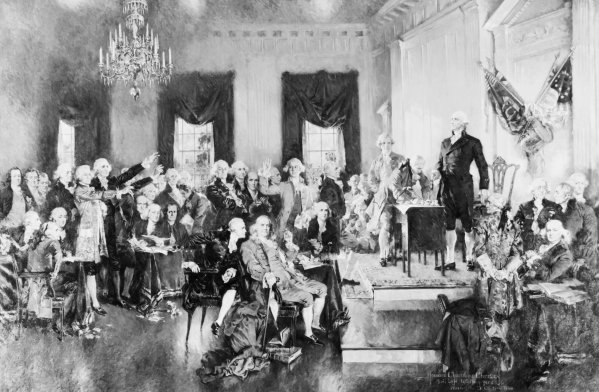 America's Founders Disagreed About Impeachment. Here's How the Idea Made It Into the Constitution
Next Up: Editor's Pick