Rep. Chrissy Houlahan, D-Pa., speaks during the press conference outside the Capitol to launch the Servicewomen & Women Veterans Congressional Caucus on Wednesday, May 15, 2019.
Bill Clark—CQ-Roll Call, Inc via Getty Imag
By Alana Abramson

When Pennsylvania Rep. Chrissy Houlahan first came to Washington, D.C. nine months ago, the Air Force veteran knew she wanted to carve out a policy niche in promoting women’s rights both domestically and internationally.

On Thursday, she will continue her pursuit of that by introducing a bill to restore U.S. funding to the United Nations Populations Fund, which provides financial assistance for reproductive health initiatives and family planning in developing countries.

While the bill is unlikely to pass the Senate even if it gets approved in the House of Representatives, it signifies the first legislative effort to restore funding since the Trump Administration first withdrew support from UNFPA two and a half years ago. If enacted into law as it currently stands, it would authorize an annual contribution to UNFPA for the next five years.

Secretary of State Mike Pompeo continued the Administration’s policy for the third year in a row this past July. The White House, like previous Republican Administrations, withdrew support from UNFPA because it claimed that the fund’s involvement in China violated its rule on financing any organization that provides abortion services overseas. The UNFPA has strongly pushed back on that claim. “UNFPA does not perform, promote or fund abortion, and we accord the highest priority to universal access to voluntary family planning, which helps prevent abortions from occurring,” the organization said in a July statement in response to Pompeo.

Houlahan, who also characterized the Trump Administration’s argument as a “false narrative,” said funding UNFPA is critical to promoting global stability. “I don’t want to be overly hyperbolic about it but world peace really depends on the health of women and children,” Houlahan said in an interview with TIME.

The freshman Congresswoman, who served in the Air Force for three years and the reserves for 13 years, said the country’s willingness to fund the UNFPA is also critical to alleviating some of the long-term pressure on the military. “If you invest in the front end in diplomacy and humanitarian efforts, then you don’t have to invest as much in the back end, which is the defense of nation,” she explained.

“By improving access to reproductive health care, the United Nations Population Fund is critical to ensuring that women and families across the globe can control their economic futures. Representative Houlahan has been a champion on this issue and I’m proud to co-sponsor the Support UNFPA Funding Act of 2019,” Velázquez said in a statement.

But all of the support has, to Houlahan’s disappointment, been along partisan lines. The Pennsylvania Congresswoman is among the freshmen who flipped a Republican district, and her frustration is palpable. “Its not without trying,” she said of her attempts to reach across the aisle. “I just think that we still need to educate…some of the conversations that I’ve had are really driven by this narrative [from the White House about abortion].”

That intractability in the House on this issue inevitably means an uphill battle if the bill ever gets to the Senate. Its more likely than not that it joins the pile of legislation the House passed that Senate Majority Leader Mitch McConnell has declined to bring to the floor. But she’s holding out hope.

“There’s been rumblings in the Senate,” she said. “If the Senate, ends up coughing up something that looks a little bit like this I think there may be an opportunity to marry them.” 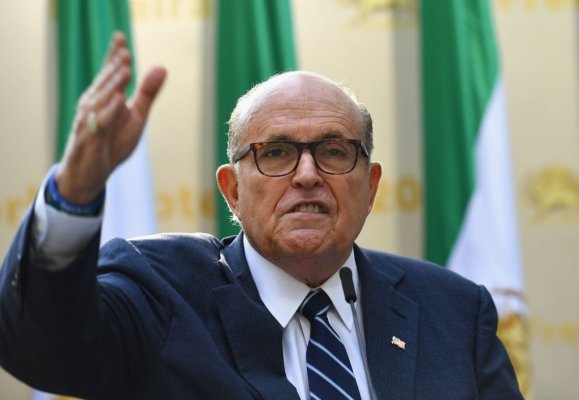 Rudy Giuliani Gives Congress the Legalese Version of a Middle Finger
Next Up: Editor's Pick