Fact-Checking the Candidates' Claims From the Fourth Democratic Debate

Tuesday’s Democratic presidential primary debate was the largest in history, featuring a record-breaking 12 candidates on stage.

Just as in the past three debates, candidates made sweeping claims about the state of the nation as they argued over issues such as health care, gun policy and the economy. Each argued that his or her policies could improve the lives of Americans.

But were all of their claims accurate? TIME’s reporters took a look.

Biden: ‘If a fireman and a schoolteacher are making $100,000 a year, their taxes are going to go up about $10,000. That is more than they will possibly save on this health care plan’

Former Vice President Joe Biden has frequently attacked Sen. Bernie Sanders’s and Sen. Elizabeth Warren’s Medicare for All plan by saying that taxes will go up for middle-class Americans. But his math during Tuesday’s debate doesn’t quite add up.

While Sanders would use new taxes to pay for Medicare for All, he and Warren maintained that the plan would cost the vast majority of Americans less than what they currently pay for healthcare.

Biden’s example of a family making $100,000 a year paying an additional $10,000 in taxes is roughly correct based the numbers Sanders has published, but this does not include any of the savings that Sanders says Medicare for All would bring.

One of the ways that Sanders has said he could pay for Medicare for All is through a 7.5% payroll tax on employers and another is with a 4% income-based premium that would be paid by households. Economists generally agree that payroll taxes come out of employees’ pay, so it makes sense to combine these when talking about new taxes. If Biden’s hypothetical family took the standard deduction, the total would be $10,524.

However, Biden is wrong to imply that this would result in an increased burden for most families. It’s impossible to know the details on health care costs for Biden’s hypothetical family, but an average family of four with employer-based health care paid $28,386 for health care in 2019, including payroll deductions and out-of-pocket expenses, according to the Milliman Medical Index. Even with new taxes, much of those costs would disappear.

Of course, all of these numbers are subject to change as there are still lots of unknown factors about any health care plan being discussed. But Biden’s scenario ignores much of the proposed savings from Medicare-for-All.

Sanders: ‘You have half a million people sleeping out on the street today’

Sanders appears to be referring to the 2018 Point-in-Time Estimates of Homeless in the U.S. from the Department of Housing and Urban Department, which estimated that a total of 552,830 Americans were homeless on a single night in 2018. According to the National Alliance to End Homelessness, this number is roughly the same as in 2017.

However, Sanders’s language exaggerated the survey’s findings. The report found that about two-thirds of homeless people in the U.S. were staying in sheltered locations like emergency shelters or transitional housing programs. About one-third were actually sleeping on the street.

Buttigieg: ‘We are “this close” to an assault weapons ban’

South Bend, Ind. Mayor Pete Buttigieg seems to refer to a ban on the sale of assault weapons, when arguing with former Texas Congressman Beto O’Rourke over whether it would be enough to ban the sale of semi-automatic weapons, rather than also requiring owners to turn assault weapons over to the government.

Buttigieg and O’Rourke have publicly argued over gun reform policy in the past few days. O’Rourke has proposed a mandatory gun buy-back program, which Buttigieg criticized and described as “confiscation.”

However, Buttigieg seems to be exaggerating the amount of traction such a ban has in Washington.

In September, the House of Representatives came close to passing a ban on military-style semi automatic weapons, 211 votes, just seven shy of the needed 218. But even if the bill were to pass, it would have a difficult time getting through the Republican controlled Senate, not to mention being signed into law by President Donald Trump—who has wavered on the issue.

Congress passed had a federal assault weapons ban as part of the Violent Crime Control and Law Enforcement Act in 1994, which outlawed certain semi-automatic weapons and banned magazines that could accommodate 10 rounds or more. But the law was repealed by President George W. Bush in 2004.

Democrats have increasingly called for a new federal assault weapons ban amid the rising number of mass shootings over the past decade. Following the back-to-back mass shootings in El Paso, Texas and Dayton, Ohio, in August 2019, Trump hinted that he might support gun control legislation, but said there was “no political appetite” for an assault weapons ban. He later reportedly told National Rifle Association chief executive Wayne LaPierre that he didn’t want to pursue it.

A September PBS NewsHour, NPR and Marist poll found that 57% of Americans support Congress passing a ban on the sale of “semi-automatic assault weapons,” and 45% supported creating a mandatory buyback program.

Castro: ‘Here in Ohio, in the latest job data, Ohio is losing jobs under Donald Trump’

Castro is correct, however, that certain industries in Ohio have faced economic hits since Trump’s inauguration.

Back in 2018, General Motors Chief Executive Officer Mary Barra cited Trump’s steel and aluminum tariffs when she announced 14,000 job cuts — including more than 1,000 at the Lordstown, Ohio GM plant this year. The plant had been open since the 1960s.

Write to Madeleine Carlisle at madeleine.carlisle@time.com, Abigail Abrams at abigail.abrams@time.com and Abby Vesoulis at abby.vesoulis@time.com. 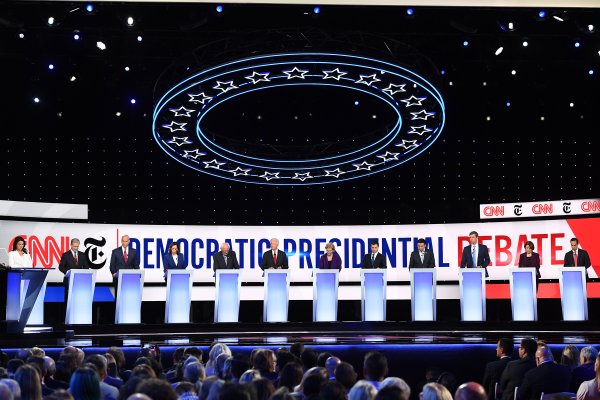 Here's What Each 2020 Candidate Said About Impeaching President Trump in the October Debate
Next Up: Editor's Pick