Conventional political wisdom has long held that a candidate cannot win the Presidency without first winning Ohio. Barring only a handful of exceptions, it’s born out every election cycle since 1860: whoever has bagged the heartland state has gone to the White House.

But as the presidential campaigns gear up for 2020, national political strategists are betting that’s no longer the case. Ohio, they argue, simply isn’t the electoral predictor it once was.

The shift is the result of changing demographics. Ohio voters in 2019 look a lot less like the rest of the country than they once did: they are whiter, older, and less schooled. Meanwhile, populations in other states like Arizona, Georgia and North Carolina are trending the opposite direction—becoming more diverse and younger, and more well-educated. As that shift intensifies, Ohio is on track to become solidly Republican, while other states are more likely to swing Democratic—forever changing that predictable national electoral map.

Top national Republican and Democratic strategists are urging party leadership this time around to put less emphasis on Ohio’s 18 electoral votes as a once-indispensable stepping stone to the 270 required to win the Presidency. National Republicans say the famously swingy state threatens to consume a disproportionate share of party resources, while National Democrats, argue there are simply more efficient places to route resources and ad buys.

The most prominent Democratic super PAC, Priorities USA, has lumped Ohio in with Iowa and Texas as second-tier goals while putting a premium on changing states like Georgia. “It’s not that Ohio isn’t winnable, because it is,” says Josh Schwerin, a Priorities USA strategist and spokesman. “Ohio has been moving away from us in recent years. It’s less a question of the past and more a question about what states are likely to decide the election.”

Meanwhile, Ohio-based political operatives of both parties are pushing back. Ohio Republican Party Chair Jane Timken says that the reason Republicans have done well in Ohio in recent elections is not because of demographic inevitabilities, but because the GOP has invested heavily in the state. “We are not going to let up. We are going to treat Ohio as a swing state. Because we need to makes sure the President wins Ohio and its 18 Electoral College votes,” Timken tells TIME. “I think Ohio is trending red, but I think it’s in part because of the work we’ve done.”

In 2018, Timken successfully leveraged Trump’s popularity among activists, amassing more than 5 million voter contacts. Bucking national trends, Ohio Democrats failed to pick up a single U.S. House seat. (Democrats did, however, net six state House seats and two Supreme Court seats.) She argues that Ohio is culturally Republican. “We care about things like football on Friday nights, going out to restaurants once in a while, going to church on Sunday,” Timken says. “The messaging that we’re getting from the Democrats, quite frankly, is so far away from the priorities of the average Ohio voter.”

Ohio Democratic Party Chairman David Pepper also disagrees with national strategists’ assessment of Ohio’s declining importance. He makes the case instead for the strategic value of forcing Trump to play defense in a state he won in 2016 by 8 percentage points.

Ohio, he adds, is less red than it was in 2006 and 2008, and Democrats are making inroads among female voters. Quinnipiac’s July poll of Ohio voters found 54% of women had an unfavorable view of the President’s handling of the job and just 41% approved of it. In 2016, Trump carried 46% of the female vote, which was more than half of all votes in Ohio. He has scant room for eroding support. Among independents, the same poll found trouble for the President’s re-election: 58% of them disapprove of Trump’s job performance.

Pepper also looks to Democratic gains in Ohio’s wealthy suburbs, which were once GOP safeguards against its deep-blue cities. He points for example at Westerville, Ohio, the site of the Oct. 15 Democratic debate, where Democrats have enjoyed a seven-percentage point swing since 2010, and Hudson, a similar suburban enclave near Cleveland, which has seen a nine-point swing toward Dems.

“The margins they used to run in the suburbs were very important to their overall coalition. It really changes the path,” Pepper tells TIME. “They’re really only relying on rural Ohio. At some point you run out of runways. They need the suburbs to offset our margins in the cities.”

Pepper also cites ever-larger Democratic vote totals. Although victories haven’t followed the numbers, the Democratic turnout is there. In 2018, Democrats carried 48% of congressional votes and 49% of the vote in state legislative races. This would suggest the state is very much in play, he says—especially if Trump continues to be dogged by impeachment inquiries. “We are more blue than we were in a year Obama won, if you look at 2012,” Pepper says.

Timken, the Ohio Republican chair, acknowledges that President Trump’s declining popularity, but argues that the Republican base will continue to support him when faced with a tangible alternative. “They may not love the President but he’s delivering for them,” she says. “It’s a binary choice.”

If anything, Trump’s foundering popularity among voters has supercharged his focus on his base—including Trump-loyalists in Ohio. The President’s re-election advisers says he will focus on re-creating the fervor of 2016, visit Ohio regularly and spend campaign cash securing the state. Among states without a Trump golf club, Ohio is the top destination for Air Force One. Ohio is the fourth highest digital spend for the President’s re-election campaign.

Pepper, the Democratic state chair, says the President’s strategy could go either way. “His digital stuff worries me,” Pepper acknowledges, but adds that the spending is a major drain on Trump’s resources. “If we have him fully engaged here, we just won Wisconsin, Pennsylvania and Michigan. We just did the hard work making Trump fight here,” he says.

For some Ohio Democrats, Hillary Clinton’s last race is something of a cautionary tale. In 2016, she largely wrote off the state, going more than a month without a visit after Labor Day. She instead emphasized growing demographics in North Carolina, Colorado and Florida.

But for now, national campaigns continue to view the state as less vital than it once was. It’s perhaps telling that on Oct. 12, when the Ohio Democratic Party hosted its major fundraising dinner—a typical draw for all of the contenders to pitch donors and activists—none of the top-three polling Democrats showed up. Former Vice President Joe Biden, Sen. Elizabeth Warren and Sen. Bernie Sanders all skipped the dinner.

Ohio Democrats were not crushed. They’re betting the trio will be back to court them ahead of the state’s March primary. Ohio’s true believers are counting on the long-held norms to take over and the state to again be the first agenda item in strategy sessions. After all, both parties have spent decades preaching to donors that Ohio is a proxy for political fortunes. 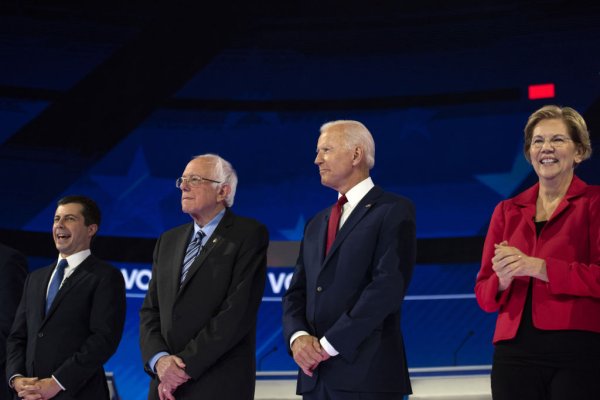 Everything to Know About Tonight's Democratic Debate
Next Up: Editor's Pick