“Watching you people melt down is the most deeply satisfying activity on planet earth,” Naomi Pierce tells Kendall in the latest episode of Succession. She’s right — there are few greater pleasures at the moment than taking in each Roy’s self-combustion every Sunday night on HBO.

Join us as we keep track of the swift rise and fall of each character in these power rankings, which will be updated every week. These rankings are painfully subjective and based on a mix of corporate leverage, deftness of negotiation, personal turmoil and insults thrown and received. Here’s where everyone stands after Season 2, episode five, “Tern Haven.”

Tom knows punching-bag routines better than anyone, but his games are mostly psychological rather than strategic — his tormenting of Greg is not part of a corporate game plan but simply a method of personal release. But Logan, on the other hand, uses Tom as a hapless strawman precisely as a schematic diversion — and then goes even further by sacrificing him without hesitation as part of final negotiations. When Tom asked Greg for ATN skulls a few episodes back, he probably didn’t realize that included his own.

And to make matters even worse, the source of Tom’s remaining power — his wife Shiv — is in serious danger, after her dinner table meltdown. Tom sacrificed his personal happiness for career gains, and now both are in freefall.

Excuse you, he’s Gregory now. (Of course, that doesn’t stop a jubilant Logan from calling him a “beautiful Ichabod Crane f-ck.”)

Roman has a twisted and extremely unhealthy relationship with power, swinging wildly between self-grandeur and crippling self-doubt. So perhaps it’s unsurprising that his sex drive thrives at the poles: he either wants complete rule, asking Tabitha to be a corpse, or utter debasement, at the hands of Gerri. His inability to navigate anything close to a reciprocal and positive relationship is painful to watch. On the other hand, his fake book, The Electric Circus, sounds like a real doozy.

When Connor looked at Maxim Pierce, did he see double? Did he realize that he was sparring with the bizarro leftist version of himself? Probably not, but Con’s cluelessness is a big part of what makes him so endearing. (That and his poetic turns of phrase, like accusing Maxim of having “both lips firmly glued to the Soros teat.”) But it turns out that when it comes to policy differences, there’s nothing that an expensive bottle of port can’t solve.

The minute that Logan offered Shiv the top spot, you could practically see a countdown clock appear over her head, ticking toward her immolation. Succession thrives on boom and bust cycles, and this week, Shiv busted in an extraordinary way — via a temper tantrum that nearly led to the entire Pierce deal falling through.

It’s possible that Shiv will still inherit Waystar, but the fact that Logan was willing to risk his entire corporate strategy — buying Pierce to become to big to fail — in order to avoid naming her as his successor is an extremely bad sign.

Marcia spent the weekend throwing rocks at Logan, with little to no effect — she was excluded from the final meeting with Nan. (Admittedly, her assertion that Logan’s wine cellar “is all new world so it doesn’t suit me” was a first class burn for the one percent set.) But she’s still in a better position than the burnt-out Shiv. Marcia is accumulating energy and playing her cards close; she feels like a coil ready to explode.

Ladies and gentleman, it’s Cherry effing Jones! The titan of Prestige TV (24, Transparent, Black Mirror, The Handmaid’s Tale) wastes no time making her mark on the series as the honey-tongued matriarch of the Pierce clan.

Nan, at first blush, might seem like a less corrosive and more pleasant leader than Logan. But it becomes clear that while her politics are drastically different, her narcissism and heinousness reach the same levels. She calls her mansion a “funny little house” and refers to drinks as “tipples.” In an act of false empathy, she implores her housekeeper Rosa to have a drink in the middle of her dinner preparation — and then takes full credit for her roast.

And not only is Nan a hypocrite, but she’s also a bad negotiator who caved immediately upon the prospect of a payday. If she really believed that Pierce is essential to the world’s betterment — and helped bring down the Berlin Wall — she probably wouldn’t have sold it to the conglomerate that just chopped Vaulter to bits. But hey, at least she’s about to be insanely rich on top of being already insanely rich.

Naomi’s introduction must be understood in the context of her drink-and-drugs buddy Kendall; see below for more.

Cousin Naomi (she wears the title quite differently from Cousin Greg) is a bundle of contradictions. She’s the Pierce’s Problem Child but can quote Richard II effortlessly; she’s a loner who makes fast friends; she’s all contempt until she’s an open wound.

And she and Kendall are two sides of the same coin: whip-smart, ambitious strivers whose crazed upbringings led them to fly too close to the sun. Naomi’s ability to read right through Kendall backfires because he, in turn, sees right through her and her relapse. And when she tells him, “You’re such a little nothing, aren’t you?” it’s both an eerie mirroring Logan’s dismissive “You are a nobody” in season 1 and also a tender display of solidarity.

Both Kendall and Naomi feel trapped by the gargantuan weight of their inheritances; only one can escape. You can hear the longing and bitterness in Kendall’s voice when he tells Naomi, “Just imagine getting out from under all this.” It seems like Kendall barely wants the throne anymore; ironically, his powerful speech to Naomi means he’s right around the corner from getting it yet again.

On an unrelated note, his phrase “Spinny spinny chicken dinny” deserves to be entered into the Library of Congress.

Logan has notched too many consecutive wins to stay in this spot for long, and discontented friends and enemies lurk on all sides. Rhea twisted another billion dollars out of him. Marcia is fuming, Kendall is detached, Shiv is shell-shocked. The buying of Pierce signals the end of one contentious story arc; the internal battle royale looms. 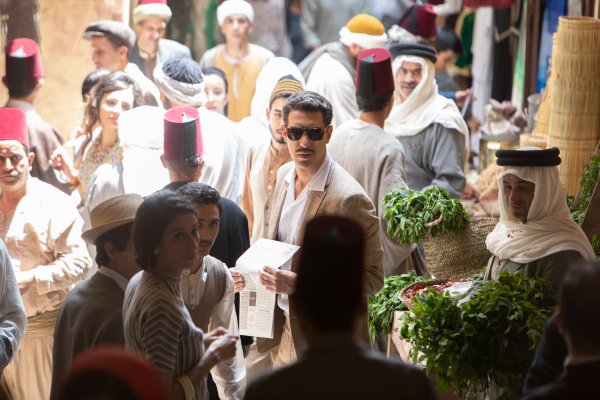 The True Story Behind the Netflix Series The Spy
Next Up: Editor's Pick