Around noon on Wednesday, a 27-year-old German man drove to a synagogue in the city of Halle in eastern Germany with the aim of killing as many Jews as possible. It was Yom Kippur, the holiest day in the Jewish calendar. The attacker failed to get past the perimeter gate of the synagogue, and then allegedly shot and killed a passerby before driving off while apologizing for his incompetence to his livestream audience: “Sorry guys … like the loser I am … One time loser, always a loser.” He continued to a nearby kebab shop where he killed one person before making an escape. Police later arrested him following a car chase.

What at first sight may appear as an isolated attack in an obscure German city is anything but. The manifesto the attacker posted online — as well as his comments during the livestream — make clear that this is just the latest in a series of interconnected far-right terrorist attacks that have taken place across the world. It follows on from attacks in Pittsburgh (United States), Christchurch (New Zealand), Poway (United States), El Paso (United States) and Bærum (Norway), attacks that have killed 85 people in total over the last year. All of them speak to the same audience of white nationalists online, hoping to inspire them to commit their own acts of violence.

Of those, the March 2019 Christchurch massacre in New Zealand — which left 51 worshippers dead in two mosques — has proven to be most influential. Wednesday’s attack in Germany featured many of the same hallmarks: the use of a livestream, the stated aim of a mass-casualty attack with “high score” kill counts, the posting of an online manifesto, the use of meme music and the language of relatively obscure internet image boards.

Beyond the similar modus operandi, the Halle shooter also invoked the unifying grand narrative of white-nationalist terrorism today: the “white genocide” conspiracy theory. This is the idea that a Jewish conspiracy is orchestrating the mass immigration of non-whites into Europe and North America with the ultimate aim of destroying the white population. Euphemistically labeled “the great replacement,” this was cited as motivation by the Christchurch, Poway, and El Paso shooters. And the Halle attacker explicitly referred to this in his live stream, blaming Jews for feminism, declining birth rates, and mass immigration, as well as denying the Holocaust.

There are, however, differences. While the Christchurch shooter wanted to kill as many Muslims as possible, he also had secondary and tertiary aims: for New Zealand and the United States to ban guns (the reaction), causing people to rise up (the counter-reaction). He said he hoped to have “accelerated” that process. New Zealand did ban assault rifles following the Christchurch massacre, though there was no popular uprising as Tarrant anticipated. The Halle attacker, meanwhile, had no such secondary or tertiary aims. His manifesto makes no mention of possible government reactions or counter-reactions. Instead, he only hoped to inspire more mass-casualty attacks by white nationalists on Jews, Muslims, and other “enemies.”

The Halle attacker had constructed an arsenal of improvised weapons, including a submachine gun and hand grenades. In his manifesto he explicitly states he wanted to prove the viability of such improvised weapons, and therefore inspire others to do the same. Yet much to his frustration, his firearms jammed throughout the attack, giving several people a chance to escape. Had his weapons proved more reliable, and had he managed to enter the synagogue, the attack would have been deadlier. His failure to do so has already become the subject of ridicule among white nationalists online.

The trend of livestreaming attacks leads to difficult questions for tech companies, particularly over whether more can be done to stop them. The Christchurch shooter used Facebook Live, while Wednesday’s attack was streamed on the gaming-platform Twitch. For its part, Twitch said that it had shared the video’s hash with the Global Internet Forum to Counter Terrorism, a partnership of leading tech companies formed in 2017 that uses hashing technology to automate content takedown. While the audience for these livestreams is relatively small — the Halle attacker’s stream was only viewed live by a handful of people — members of an online subculture quickly downloaded and shared this content on more obscure platforms. Tackling those may prove more difficult. 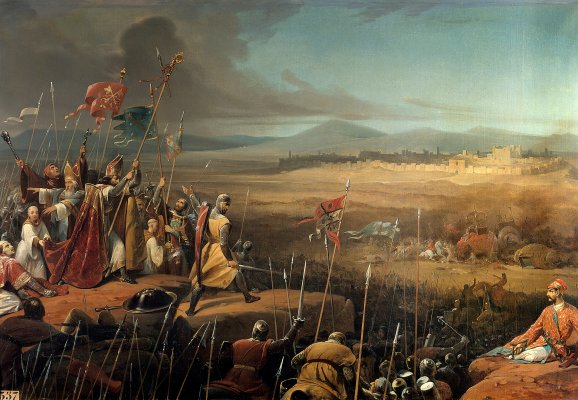 What the Far Right Gets Wrong About the Crusades
Next Up: Editor's Pick