Trump Loves the Military. But He Doesn’t Like Using It

President Trump speaks at a rally in a hangar at Al Asad Air Base, Iraq, on Dec. 26, 2018
Andrew Harnik—AP
Ideas
By James Stavridis
Admiral Stavridis (Ret.), a TIME Contributing Editor, was the 16th Supreme Allied Commander at NATO and is Vice Chair, Global Affairs at The Carlyle Group and Chair of the Board of the Rockefeller Foundation. He is the co-author of 2034: A Novel of the Next World War. His new nonfiction book is To Risk It All: Nine Conflicts and the Crucible of Decision

Some time ago, a young combat veteran I’ve been mentoring for years sent me a troubling email.

His unit was considering holding a significant ceremony at a property controlled by President Trump’s company. Given the recent public concerns about Air Force flight crews staying at a Trump hotel in the U.K., this young officer felt the appearance of enriching the Commander in Chief’s corporate pockets with Department of Defense funding was wrong. That is correct. But what is deeply disturbing is that he had to wrestle with these moral and ethical questions regarding his chain of command. He should be concentrating on preparing for combat operations.

At the highest levels of the military, these same political concerns are manifesting themselves in everything from hiding a Navy vessel, the U.S.S. John S. McCain, for fear of offending the President, to the current controversy over American military aid to Ukraine, which the President possibly held up in an attempt to pressure the Ukrainian government into investigating a political rival. For our military, this kind of intrusion of domestic politics into national security is concerning.

Trump’s relationship with the military is an odd mix. He was a cadet at a military academy who then avoided combat service in Vietnam through a controversial diagnosis of bone spurs. Counterintuitively, he enjoys a high percentage of support within military ranks (especially among enlisted men). His widely reported adulterous affairs and on-camera denials about paying off porn stars are behaviors that would destroy any military career, but he also seems to respect the military ethos deeply, always behaving very respectfully when around senior military officers. I was interviewed about a possible Cabinet post in December 2016 at Trump Tower, and the then President-elect was respectful and personable, despite the fact that I had been vetted for Vice President by Hillary Clinton. And he peppered his Cabinet and closest advisers with “my generals”–Kelly, Flynn, McMaster, Mattis, Kellogg–although most of them have since been discarded in frustration.

He works military themes into his long campaign speeches, including his support for big defense spending. He is clearly aware of the domestic political advantage that wrapping himself in the banner of the military–America’s most trusted institution–affords him. The President’s base generally reveres the military, and the loudest cheers at his rallies are often for the armed forces. Also, he knows military votes matter with millions of active-duty personnel, reservists and veterans who turn out for elections.

At the most basic level, the Trump strategic approach ensures a military that is well funded and combat-ready. Under him the Pentagon produced a reasonably effective National Defense Strategy. That strategy is notable for its pivot to emphasizing an emerging era of great-power competition after almost two decades of a counterterrorism strategy in the wake of 9/11. Both China and Russia are increasing their military capability, and Trump–despite his seeming personal affinity for Vladimir Putin–has been supportive of directing U.S. military readiness toward preparing for potential conflicts with them.

Another clear element of the Trump strategy is to push our allies to spend more on their defense, thus reducing the burden on the U.S. This strategy has produced an uptick in defense spending in Europe, although whether the NATO allies will in fact meet their pledge to hit the goal of 2% of GDP remains to be seen. Elsewhere, defense spending by allies and partners is rising in Asia (driven mainly by concerns about Chinese spending, particularly on the part of Japan and Australia) and the Middle East (where Iran’s bellicose behavior has had an effect, especially on the Israelis).

Operationally, the Trump strategy appears to be “Talk loudly but avoid brandishing your stick.” The President talks tough on international challenges, saying things like he would destroy Iran or rain “fire and fury” on North Korea, but he generally seeks to minimize actually using the military, believing that the American public wants an end to the conflicts of the past two decades. In terms of China, the Administration continues to launch provocative “freedom of navigation” patrols in the South China Sea but has not taken more aggressive military action. Against Russia, the Trump approach seems to be supporting NATO by putting more troops in Europe (at least on a rotational basis and in nations toward which he feels personally well disposed, like Poland). He also tends to move impulsively with little military consultation or interagency advice, as he did in apparently pulling troops back in Syria after a phone call with the Turkish President–to the shock of the Pentagon and our allies in the region.

Related to this, he seems to seek grand bargains that he can categorize as resulting from his personal engagement in the diplomatic process. This has certainly been the approach with North Korea and his “beautiful letter”–writing to close friend Kim Jong Un. Trump has also mused about meeting with President Rouhani of Iran, an approach that was abruptly rebuffed by the Iranians. The President appears to want a trade deal before the 2020 elections in the U.S. and seems willing to put security concerns on a back burner while seeking such an accord. Trump will certainly continue to try to reduce U.S. troop levels in Afghanistan. His strategy ignores the national-security implications of climate change.

In terms of military technology, the President is personally disengaged, appearing content to allow his Defense Department to take the lead on procurement. Trump has touted arms sales to various nations (Saudi Arabia, Japan and others) as good business for the U.S., and he seems willing to provide technology transfers to sell such deals.

While Trump’s use of the military is largely conventional, much of what passes for strategy from the White House is oriented toward what will benefit his re-election campaign. As 2020 approaches, Trump will likely seek to avoid a shooting war, consummate one or two diplomatic successes that can be categorized as avoiding conflict (especially with North Korea and possibly Venezuela) and push for continued military spending. He will undoubtedly continue to wrap himself in the military–and he won’t be the first President to do so.

But the worry going forward is that the bitter, partisan tone of Washington will begin to bleed into our military. The debates that are likely to unfold over the use of military aid to Ukraine as a domestic political tool will seep into day-to-day conversations on warships, in hangar bays and on training ranges. Young military officers shouldn’t have to wrestle with the ethics of a paid event at a Trump property, and admirals and generals shouldn’t have to constantly assess how they can avoid the maelstrom of politics. Over time, even given the best efforts of the professional military, there will be corrosion in the chain of command and wasted energy dealing with these issues.

I gave a speech in New York City about a year ago, and an elderly member of the audience asked me an unsettling question: “Admiral, things seem to be going to hell in a handbasket these days. When is the military going to do something about it?” I was shocked into silence for a few seconds before I said that America’s military has no role in domestic politics nor any inclination ever to have one. That foundational element in our republic can be counted upon, no matter the political pressure–an important certainty in the age of Trump. But we need to be mindful of the difficult environment in which our military operates as the fierce winds of politics blow in this angry season. 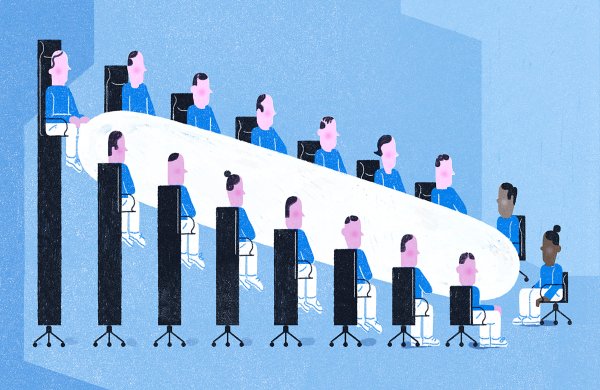 Diversity Has Become a Booming Business. So Where Are the Results?
Next Up: Editor's Pick