In Joker, Black Women Are Visible But They Are Not Seen

Warning: this piece contains spoilers for the movie Joker.

The slogan “listen to black women” emerged as a familiar refrain after the 2016 election, and with good reason. Some of the first people to decry Donald Trump’s actions as a political figure were black women, from the 94 percent of us who didn’t vote for him to Congressional leaders like Maxine Waters, who pushed for the now unfolding impeachment inquiry long before her peers. I couldn’t help but think about all this after watching Joker. The film positions its black women characters in an oddly similar fashion, though it ends up doing them, and the movie, a great disservice in the process.

Joker has proven to be as successful as it has been contentious. After a week in theaters, the film is approaching worldwide ticket sales of $350M, breaking box office records even as it has generated controversy, with some critics calling it dangerous and law enforcement officials addressing security concerns. Amid these debates, one element that’s been less frequently discussed is the movie’s inclusive casting choices in its supporting roles. The characters who respond appropriately to a clearly disturbed and dangerous man in Joaquin Phoenix’s Arthur Fleck are, more often than not, the black characters: four black women play supporting parts in Joker in addition to a brief scene-stealing turn from Atlanta and If Beale Street Could Talk actor Brian Tyree Henry. Even as more actors of color are getting cast in bigger projects these days, as a black person you still take notice when a black actor—or, as in the case of Joker, five—appears in a major film release and gets more than a moment of screen time.

Perhaps director and co-writer Todd Phillips didn’t expect these casting choices to elicit much attention. But the black characters in Joker, as a few critics quickly pointed out, show up in weirdly specific ways throughout the movie. Joker undertakes a subtle but consistent mission to convince the audience that Fleck—a nihilistic mass-murderer—deserves understanding more than condemnation, and the black characters are on the front lines of that effort. Black characters, and especially black women, are relied upon to call out Fleck’s insanity, but their perspectives are repeatedly undermined.

Thomas Wayne (Bruce’s father, played by Brett Cullen) and his butler Alfred (Douglas Hodge) rebuke Fleck too, but as well-established characters in the DC Extended Universe, who both happen to be white men, they are more palatable to a core audience which predominantly looks like them. By contrast, there is far less character development, if any at all, of the black women in supporting roles, signaling to the audience that they are not who we’re supposed to be curious about, or listen to. The implication is that Wayne’s voice matters; the black characters are there to help grease the skids for Joker’s imminent rise.

The social worker (played by veteran character actor Sharon Washington) is the first of these characters to appear, when we see Fleck go on a caseworker visit. She asks about his journal, which he’s routinely forgotten to bring with him until now, a small sign of her genuine, if somewhat strained, concern for him. When she later tells him that the funding for his healthcare has been cut, she explains that the people in power “don’t give a sh-t about people like you. They don’t give a sh-t about people like me.” Even though Fleck tells us in the scene that she’s a bad counselor who never listens to him, what we actually see is a woman who is trying to help him cope and catch up to the reality that hardship is not personal. Phillips is effectively asking us to see this misogynistic future murderer as disadvantaged in the same way that this underpaid government worker is.

Similarly, the woman on the bus who tells Fleck to “stop bothering [her] kid” seems like a tired mom who is simply looking out for her son, rather than offering the cruel rejection Fleck reads into their interaction. A lot of exhausted parents would welcome a well-meaning stranger’s attempts to give them a break by entertaining their kid from a safe distance. (Think of the caregivers who accept help from strangers towing strollers up the stairs of New York City subway stations.) But Fleck is a glaring red flag: if you’re beginning to empathize with him, you may read this mother as one more example of a world out to get him. But to anyone not invested in Phillips’ attempts to redeem him, her response reads as perfectly normal.

The first time Fleck shows up at Arkham psychiatric facility, the low-level clerk Carl (Henry) quickly clocks Fleck’s mental fragility. He politely tells Fleck he can’t have the file on his mother Penny (Frances Conroy), but after a standoff, Arthur runs off with it anyway. Even though Clark couldn’t maintain his grip on the folder, the quiet intensity he displays in the ensuing standoff injects the movie with more truth than many of its more pivotal scenes. Later, the Arkham psychiatrist (April Grace) tries to meet the Joker on his level by approaching him with surprising warmth as she does what appears to be a psych evaluation. But like he did with the social worker, Fleck tells her—and us—that he isn’t going to tell her his jokes because she “wouldn’t get them anyway.”

The meatiest of these roles is that of Fleck’s love interest, Sophie Dumond, played by Zazie Beetz. Sophie appears to enjoy the attention Fleck pays her: when she notices Fleck following her to work, she’s flattered; they soon begin dating. We see her sitting with him at Penny’s bedside in the hospital and laughing at his bad jokes when he does standup. But when Fleck shows up to Sophie’s apartment uninvited and she asks him to leave, we learn that their romance up until that point was actually just a fantasy in his head. (The biggest clue was when she was charmed rather than creeped out by his stalking.)

How the movie handles—or rather does not handle—the fates of Sophie and the Arkham psychiatrist is telling too. After the truth of their nonexistent relationship is revealed, we never see Sophie again, but with Joker having pseudo-actualized into a cold-blooded killer with a mission by this point, as ominous sirens blare in the background, it’s natural to wonder whether he’s killed her. Likewise, after Joker shuts down the Arkham psychiatrists’ interview, he prances freely down a fluorescent white hallway leaving blood-red footprints behind him. The audience is left to imagine the violent send-off he might have given these characters, freed up to focus instead on Joker’s madness as embodied by Phoenix’s frail frame, maniacal laugh and eery-elegant dancing.

But when it comes to the demise of Joker’s perceived enemies, including his mother, the details are clearly spelled out. When the Joker kills the three Wall Street guys, his disingenuous co-worker and the late night talk show host who mocked him on national television, Murray Franklin (Robert De Niro), each of their murders has an extended build-up that unfolds in painstaking detail. Of course it would bring on criticism if the film were to show Joker viciously murdering two black women on camera. How convenient then, to simply leave this violence out without doing the necessary work of justifying it. The lack of clear resolutions to these characters’ arcs makes it easier for the average moviegoer to ignore that the Joker is an ill, misguided man who resents accountability while being simultaneously hooked on his sense of entitlement and superiority.

Ten years ago, when Phillips’ film The Hangover made its theatrical debut, the New York Times described his filmmaking this way: “an adept and tireless connoisseur of male boorishness and stupidity though the crude humor he dispenses is frequently leavened by nuggets of inventiveness and wit.” To some—like the jury at the Venice Film Festival, which awarded the film the year’s top prize—the film represents a leap from dude-bro comedy to edgy auteur thriller. Whether or not you agree with that, Phillips has said he intentionally distanced himself from his previous mode: the brand of comedy on which he built his career isn’t a sure thing anymore in today’s “woke culture,” as he told Vanity Fair.

Today at the movies we can reasonably expect actors of color to be cast in “white films” in a way that we couldn’t in the past, but if the portrayals are disingenuous, is this really progress? Asking audiences to accept the forgone conclusion that a misogynistic mass murderer is above all a victim who deserves empathy is not only misleading and crass, it’s just bad storytelling. And no amount of misguided colorblind casting of black women, or characters from any underrepresented group, will make up for that.

Beandrea July (@beandreadotcom) is a culture writer and audio producer based in Los Angeles. Her work has appeared in the New York Times and the Hollywood Reporter, and has been heard on NPR. 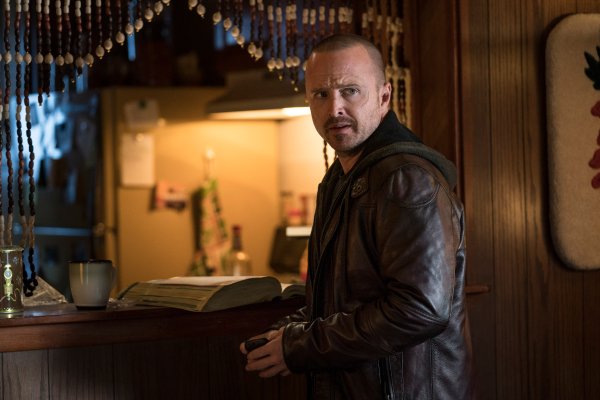 Aaron Paul on the Ending—and the Cameos—of El Camino: A Breaking Bad Movie
Next Up: Editor's Pick