Discovery Docuseries Why We Hate Is Essential Viewing. It's Also Deeply Flawed

On the morning of October 1, Donald Trump tweeted out a meme. Printed over a misleading map—accounting for geography rather than population—that divided the United States into giant red and tiny blue zones were the words: “Try to impeach this.” It was hardly the first time the President had suggested that removing him from office would cause a second Civil War, nor did this pugnacious rhetoric from the Commander-in-Chief seem to surprise anyone. So I’m going to assume that if you’re reading this, you’re well aware of why a new TV show exploring tribalism and cruelty among humans would feel timely.

Backed by a team of executive producers including Steven Spielberg and the mega-prolific documentary filmmaker Alex Gibney (Going Clear), Discovery’s ambitious docuseries Why We Hate seeks to explain our species’ most destructive instincts. In each hour-long episode, directors Geeta Gandbhir and Sam Pollard (who shared an editing Emmy for Spike Lee’s Hurricane Katrina doc When the Levees Broke) visit the dark reaches of the human psyche, illuminating how extremists and demagogues use tactics like dehumanization to incite political unrest, oppression, violence and even genocide. Beyond tracing the roots of hate, they repeatedly raise the question of how and why that emotion can drive regular people to monstrous behavior.

It’s a massive undertaking, one that required the filmmakers to not only synthesize insights from multiple disciplines, but also to avoid cultural chauvinism and stereotyping, which would perpetuate the same kind of conflicts they seek to defuse. Gandbhir and Pollard succeed, mostly, by incorporating nuanced examples from around the world. In Colombia, they follow a campaign to reunify a nation bitterly divided by the decades of war between government forces and FARC guerrillas. The face of jihadi extremism is a de-radicalized white American man who now works to reform white supremacists. An episode on tribalism profiles pro- and anti-Trump activists, Israelis and Palestinians, easily angered soccer hooligans and survivors of Myanmar’s Rohingya genocide. Along with ensuring that no race, faith or nationality is depicted as uniquely hateful, the variety allows viewers to consider the role of hate in conflicts where they don’t necessarily have an allegiance.

Diversity is paramount here, but not just in the sense that it includes people from a wide range of cultures. Instead of casting a single host for the series, Gandbhir and Pollard select a sort of guide for each episode whose expertise is salient to the topic at hand. In “Tools & Tactics,” the New Yorker journalist and Columbia professor Jelani Cobb deconstructs propaganda. International criminal lawyer Patricia Viseur Sellers lends empathy and perspective to the toughest hour, “Crimes Against Humanity,” which which probes the phenomenon of mass killings. In one affecting scene, Sellers, who is black, visits a lynching memorial and finds that she shares a last name with a victim immortalized there.

Why We Hate is such an intelligent, engrossing and, again, well-timed project that it seems beside the point to complain much about its stylistic blandness. It’s hard to imagine any director navigating this minefield of a subject with more sensitivity than Gandbhir and Pollard display—or demonstrating a more expansive, inclusive worldview. Still, there are big blind spots.

Grounded in psychology, anthropology and neuroscience, the show can come off as a bit too credulous about scientific research as a panacea for hate. If comparing the social structures of aggressive chimps and peaceful bonobos—homo sapiens’ two closest genetic relatives—can provide insight into human morality, the filmmakers suggest, then further study across disciplines could conceivably teach us how to prevent future atrocities. A segment on Megan Phelps-Roper, the Westboro Baptist Church scion who famously left the hate group after encountering challenges to her views on the internet, illustrates the finding that the journey from bigotry to tolerance can be surprisingly short.

But by leaning so hard on science, the series prioritizes quelling aggression to the exclusion of righting wrongs in the political realm. After an early segment offers a biological explanation for why mass shooters are so often young and male, the show barely mentions other facets of the relationship between hate and gender, even as men dominate its case studies of hate-fueled violence. More crucially, the filmmakers too rarely devote adequate attention to the structural power imbalances that underlie hatred (economic inequality gets particularly short shrift). This can obscure the substance of each conflict, eliding the notion that genuinely oppressed groups should see their grievances redressed through non-violent means, while relatively empowered groups with siege mentalities, like white supremacists, deserve nothing more than a rude awakening.

If humanity is going to stand a chance of surviving every horror the current century has thrown at us, from authoritarianism to climate change, we’ll have to ramp up our efforts to stamp out hate. And to do that, we must understand how it works. If one group’s antipathy for another has its roots in systemic injustice, then no amount of individual kindness is going to solve that problem. Meditation, one of the hopeful ideas outlined in the finale, can’t heal the wounds of slavery or genocide. It’s never going to change the fact that some people have more reason to be angry than others. Why We Hate is a vital show. If only it had the courage to consider that the most effective form of conflict resolution might be justice. 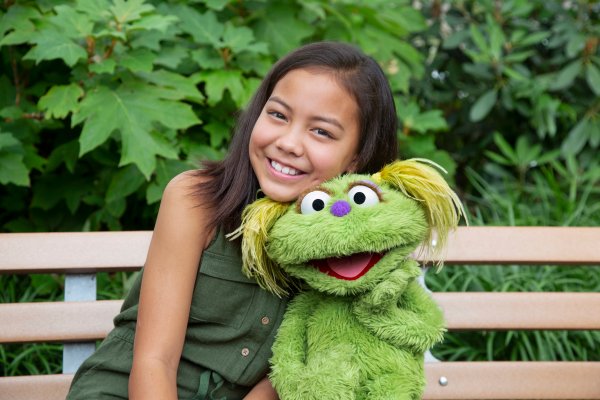 Sesame Street Aims to Tackle the Opioid Crisis in a Way Kids Can Understand With the Muppet Karli
Next Up: Editor's Pick