The decision used to be clear. If you wanted Android, you got the latest Samsung Galaxy. Now, with HTC’s latest release winning critics’ hearts, editors’ awards, and even some Apple loyalists, there’s a real debate now: the Samsung Galaxy S5 or the HTC One M8?

Time to break this down in an eight-round, mini boxing match. Let’s get ready to rumble…er…vibrate.

The HTC One M8 has a talent for first impressions. Smooth to the touch, pleasantly metallic, and more charming than Barack Obama at an election-year fundraiser, the M8 is the most elegant device on the market.

Meanwhile, the Samsung Galaxy S5 remains defiantly plastic, a serviceable—but underwhelming—design choice. Samsung might try to pass this off as “modern glam,” but more accurate descriptions would involve phrases like “conveyor belt,” “cheap design” and “maximize profits.” Sorry, Samsung: you can’t fool us this time.

Before we get carried away, however, let’s acknowledge a few of the S5’s less tangible hardware advantages. The plastic might feel cheap, but the S5’s screen-size to weight ratio is pretty impressive (5.1-inch screen, 146 grams vs. the M8’s 5.0-inch screen, 160 grams). What’s more, among top-rated, 5-inch-plus phones, the S5 is one of thinnest devices out there (just a tad thicker than the Sony Xperia Z), while the HTC One M8 is thicker than average. Throw in the S5’s water- and dust-resistant features, and Samsung almost makes up for all that cheap plastic.

You can pick your storyline depending on the type of user you are. On the one hand, the M8 and S5 are both industry-leading handsets, boasting top-tier processors, great benchmark scores, and overall snappy performance. For the casual user, that’s all you need to know.

But for the geeks out there, the S5 does edge out its HTC rival. Even if both phones are top performers, the S5 has a slight to moderate edge in just about every technical category. For now, the difference in real-world performance might seem negligible, but as each device sees OS updates and new, ambitious apps, the S5 has the opportunity to stand out over time.

It’s one of the most important attributes, and also one of the hardest to measure. What constitutes typical use? How will battery life hold up over time? And which special power saving mode has the more ludicrous title (“Ultra Power Saving” on the S5 vs. “Extreme Power Saving Mode” on the M8)?

In the end, the M8 performs a bit better in most power-saving categories, particularly in standby mode. If your phone tends to sit in your pocket or purse for half the day, the M8 may be the better choice. It’s a closer call for power users, but unless you’re taking 20-hour phone calls on a daily basis, the M8 still tends to edge its Samsung alternative.

Finally, neither phone’s power saving name is truly absurd: “ultra” and “extreme” just don’t show the imagination of words like “mucho” and “über.” C’mon guys, get it together.

The display battle is dead even. Both phones feature a 1,920 x 1,080 screen, though the S5’s screen size is 0.1 inches bigger (5.1″ vs. 5.0”). As a result, the M8’s screen is technically crisper (that’s 441 vs. 432 pixels per inch for you math nerds), but getting hung up on that difference would be almost as ridiculous as getting hung up on the name of each phone’s power saving mode. It comes to personal preference: marginally bigger (S5) or marginally crisper (M8).

With better clarity, many more pixels, and plenty of camera modes, the S5 beats the M8 in almost every camera category, and 4K video recording doesn’t hurt either. Real-world tests consistently confirm the specs. This one’s not close.

The experts and tech snobs might be testing soft-focus, color-corrected shots at Niagra Falls, but we all know Joe and Jane 55-year-old-Android-buyer won’t touch 90% of either camera’s features. When you focus on amateur photographers, the M8-S5 comparison actually gets a lot closer.

Take low-light shots. Just about every mom in America will whip out her phone for those indoor, poorly-lit pics of family dinners and holiday gatherings. Here, the M8 tends to win. The so-called “ultra-pixels” (bigger than the S5’s standard pixels) are much better at capturing light in dark and drab conditions.

Then there’s the frequently-mocked front-facing camera — you know, the one Apple hasn’t updated in years and even spec-hungry Samsung won’t improve beyond 2.1 megapixels. The M8’s 5-megapixel front-facing camera is currently the best on the market. You might never touch the thing, but you know your video-chat-happy parents and selfie-obsessed co-worker will use it half a dozen times per day.

In fairness, Samsung did an admirable job scaling back all the clutter of its 30+ camera modes, making the S5’s camera interface much more beginner-friendly than the S4’s. Still, when it comes to casual-user camera features, the M8 actually scores a slight win.

Now that we’ve covered the essentials, what about the bonus bells and gimmicky whistles? Each phone has a pet feature (or two) to help distinguish the device from its competition. HTC continues to promote Zoe, its insta-slideshow app that combines a tune and a handful of photos to make a cheesy, sharable video. Meanwhile, Samsung rides two mobile trends: security (fingerprint scanner) and fitness (a heart rate monitor). They all make for great demos and fun commercials, but which features will customers actually use?

Regrettably, probably none. Popular apps like Vine make Zoe somewhat redundant, and users tend to stop using the feature faster than you can say “Siri.” Meanwhile, neither the heart rate monitor nor the fingerprint scanner on the S5 work as well as advertised. Syncing with the heart rate monitor takes too much effort, particularly compared to the seamless, industry-leading fitness trackers. And as for the fingerprint scanner: even the most devoted Android loyalists are admitting the feature isn’t as reliable as the iPhone’s.

Still, the S5 secures a narrow win based solely on future potential. Zoe might be neat, but it’s doing nothing to reinvent the way we use our phones. In contrast, Samsung deserves a few points for its continued innovative intentions. We’ve seen Samsung play this game before: a half-baked feature in one phone typically leads to a mature feature in the next.

In the end, the Samsung Galaxy S5 earns a victory over the HTC One M8 by the narrowest of margins, though the hardware design alone is enough to keep the M8 in contention. Even with the close loss, HTC has to be happy: For once, its flagship product can compete shoulder-to-shoulder with the perennial Android favorite. 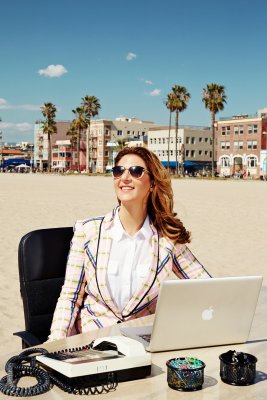 Silicon Valley Heads to the Beach
Next Up: Editor's Pick