President Donald Trump speaks during an event in The Villages, Florida on Oct. 3, 2019.
Joe Raedle—Getty Images
By Alana Abramson and Tessa Berenson

It’s not easy to surprise a judge. On Tuesday in Washington, Trump administration lawyers found a way.

In DC federal court Tuesday, a Justice Department lawyer argued that the Administration could keep grand jury materials from Congress, contradicting the famous 1974 decision by Judge John Sirica that released Watergate special prosecutor findings to the House. The Sirica decision held that congressional impeachment proceedings are exempt from typical grand jury secrecy rules, but Trump’s Justice Department lawyer, Elizabeth Shapiro, said Sirica relied on an “ambiguous” interpretation of law and “a different result” would have come from the case today.

The episode highlights how Congress and the White House are staking out maximalist constitutional positions across a number of fights, potentially remaking the balance of power for a generation. The Trump Administration is advancing an aggressive, pre-Watergate view of executive power. House Democrats, for their part, are betting that labeling a number of ongoing investigations part of a formal impeachment inquiry will strengthen their search for evidence that Trump has abused the office of the presidency for personal political gain.

The consequences of the fight depend in part how high up the court system either side wants to go, as a new generation of conservatives like Brett Kavanaugh and Neil Gorsuch settle in on the Supreme Court. The Trump Administration lawyers may find at least one sympathetic ear in the current Supreme Court on Nixon-era precedent, if the battle gets that high. In 1974, the Supreme Court held unanimously in U.S. v. Nixon that presidents don’t have unchecked power to declare executive privilege and that Nixon had to comply with a subpoena and turn over White House tapes that the special prosecutor was seeking.

Justice Brett Kavanaugh, Trump’s second nominee to the Supreme Court, once questioned that decision. “Maybe Nixon was wrongly decided—heresy though it is to say so,” Kavanaugh said in remarks at a round table that were published in 1999. “Maybe the tension of the time led to an erroneous decision.” Kavanaugh, a former White House lawyer for President George W. Bush, continued: “[The] Nixon [decision] took away the power of the president to control information in the executive branch by holding that the courts had power and jurisdiction to order the president to disclose information in response to a subpoena sought by a subordinate executive branch official,” he said. “That was a huge step with implications to this day that most people do not appreciate sufficiently.”

The fight between Trump and Congress escalated this week as the White House shut down any possibility of renewed cooperation under an impeachment inquiry in a letter to House leadership on Oct. 8, signed by White House counsel Pat Cipollone. “President Trump and his Administration reject your baseless, unconstitutional efforts to overturn the democratic process,” the letter reads. “Your unprecedented actions have left the President with no choice. In order to fulfill his duties to the American people, the Constitution, the Executive Branch, and all future occupants of the Office of the Presidency, President Trump and his Administration cannot participate in your partisan and unconstitutional inquiry under these circumstances.”

In a call with reporters the same evening, a senior administration official elaborated on the contents of the letter, saying there would be a “full halt” on making members of the administration available to testify, providing documents or complying with subpoenas. “Just saying flat no, we’re not going to cooperate at all, is really a pretty extraordinary position,” says John Bies, a former Justice Department lawyer for the Obama Administration.

While House Democrats think a formal inquiry will strengthen their legal footing in forcing subpoena compliance, the White House argues that the fact that the House never held a vote to launch the inquiry will tip the scales towards the executive branch if the courts need to step in. The impeachment inquiries against both President Richard Nixon and President Bill Clinton were authorized by a full vote in the House, though that is not a constitutionally prescribed step. In this case, Pelosi merely announced the formal beginning of an inquiry in a press conference.

“Courts tend to look at the practice— the precedent of the way that branches have handled inter-branch conflicts, and treat that as gloss in many circumstances on what the Constitution requires,” a senior administration official said on the call about separation of powers issues. The courts have required a vote from the House to authorize engagement in “very grave inter-branch conflict” such as certain kinds of litigation, the official said, “because it’s that vote from the House that shows the will of the body, the institution.”

Still, Democrats hope that initiating a formal impeachment inquiry, even without a vote to initiate it, will give them more leverage against the White House and, if necessary, help advance a stronger argument in court if the executive branch continues to stonewall. “We want to make it abundantly clear that any effort by the secretary, by the president, or anyone else to interfere with the Congress’ ability to call before it relevant witnesses will be considered as evidence of obstruction as the lawful functions of Congress,” Rep. Adam Schiff, chairman of the House Permanent Select Committee on Intelligence, told a packed room of reporters on Capitol Hill Wednesday. “And more than that, it will allow an adverse inference to be drawn as to the underlying facts. If they are going to prevent witnesses from coming forward to testify on the allegations in the whistleblower complaint, that will create an adverse inference that those allegations are in fact correct.”

“The White House should be warned that continued efforts to hide the truth of the president’s abuse of power from the American people will be regarded as further evidence of obstruction,” House Speaker Nancy Pelosi said in a statement.

In the weeks since Pelosi formally said the House was launching an inquiry, the three committees tasked with investigating President Trump’s outreach to Ukraine have moved quickly. The Foreign Affairs committee issued a subpoena for Secretary of State Mike Pompeo and the House Intelligence committee did the same for President Trump’s attorney Rudy Giuliani. Rep. Elijah Cummings, who chairs the committee on oversight and government reform, has said that he will subpoena the White House for documents relating to President Trump’s July 25th phone call with Ukrainian President Volodymyr Zelensky.

Procedurally speaking, these moves are nothing new. Democrats have issued multiple subpoenas for both White House officials’ testimonies and documents since they assumed control of the House of Representatives last January. But, taking a bold stance on executive power, the White House has ignored many of them, and directed former officials do the same. To Democrats’ dismay, all of this has so far largely been without repercussions.

“Impeachment removes some of [the White House’s] defenses,” says Elliot Mincberg, former chief counsel for oversight and investigations of the House Judiciary Committee. “They’ve argued in response to oversight that there is no legislative purpose. Here there is a legislative purpose. That doesn’t mean the White House won’t come up with another excuse. But whether they comply still depends on their willingness to do it and if not, then the willingness of a court to force them to.”

So far, neither Giuliani nor Secretary of State Mike Pompeo have said they will comply with the subpoenas. The White House also blocked Gordon Sondland, the U.S. European Union ambassador, from appearing before a House panel on Oct. 8 as part of the impeachment inquiry. This will likely tee up another subpoena fight, says Samuel Dewey, a former Congressional staffer who served on Capitol Hill for four years. “The Administration had several valid legal objections and stood by them,” says Dewey, now a lawyer at McDermott Will & Emery. “Yet the next likely step will be for the House to issue a subpoena.”

From a legal standpoint, say some experts, an impeachment inquiry does not significantly change the White House’s ability to defy subpoenas. Even if Democrats threaten obstruction, the Republican majority in the Senate, and the fact that those lawmakers have so far been supportive of the administration, offers a sense of protection against actually removing Trump from office. “There is nothing legally different than the subpoenas that went to [former White House Counsel] Don McGahn or [Treasury Secretary] Steve Mnuchin or the other ones out there,” said Kerry Kircher, who served as the General Counsel for the House of Representatives under Speakers Paul Ryan and John Boehner. “In terms of enforcing them, if the House decided to go to court… It would be the same song and dance legally.”

While the legal considerations for the White House on cooperating with Congress may remain largely the same, experts say that the political considerations have certainly changed. “Impeachment is the big story now,” said Kircher. “That was not true of the subpoena with McGahn and the subpoena with Deutche Bank and [Trump’s accounting firm] Mazars.”

Still, so far the political pressure has not inspired a more open posture from the White House, and congressional Democrats worry the stonewalling will continue. “It hurts the ability to move through expeditiously,” says Rep. Mike Quigley, an Illinois Democrat on the House Permanent Select Committee on Intelligence. “If the process is slowed, it won’t be because of us.”

Which is why the courts may ultimately need to step in. 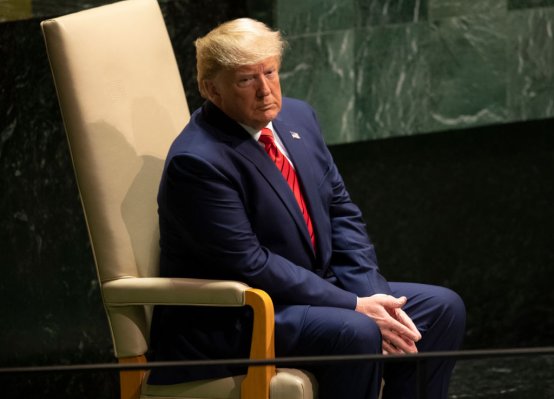 Here's How Long the Trump Impeachment Could Last
Next Up: Editor's Pick