Two-time Academy Award-winning actor Jessica Lange—whose recent projects include American Horror Story and The Politician—is also an accomplished photographer. Although Lange, now 70, left her hometown in northern Minnesota at age 18, her affection for the region has endured and is the subject of a new book of photography, Highway 61. Lange’s collection of over 80 tritone photographs captures the diversity of experience along the route, ranging from families at carnivals in Wisconsin to boys playing basketball in Mississippi with long stretches of clear road in between.

TIME spoke to Lange about Highway 61, the loneliness of taking pictures and how photography and acting influence one another.

TIME: This is your third book of photography. What sets it apart from the others?

Lange: It’s the first time I had worked this way, with an idea and a result in mind. I wanted to record as much of the 1,400 miles between the beginning of Highway 61 and the end of Highway 61 as I could. I was looking for things, and it was much more deliberate.

In the book, you write about feelings of loneliness at visiting parts of that scenic route. Why did that come up for you?

I think I’ve always been extremely sensitive to loneliness. I was a lonely child. It has been one of the main conditions of life. And I feel it there. I see it in the empty storefronts and the boarded-up buildings and the abandoned farms and the barns that have collapsed. It feels as though something has gone missing. I left when small towns were still very vibrant and vital. Over the ensuing decades, the industry, the mills and factories, like most of rural America, have disappeared. But that’s not to say it’s a ghost-ridden highway.

In Highway 61 you quote French essayist and philosopher Roland Barthes, who wrote that “every photograph is a certificate of presence.” How does this relate to your photographs?

It is presence in the true sense, not just being there, but being present and aware and slowed down enough. That’s one of my biggest problems: I am not a person of patience. It’s been a good discipline working in photography because it’s forced me to wait and to look and to be patient. For me, photographing is a wonderful kind of solitary meditation because you are completely focused.

What are the main challenges you find when you’re doing this kind of work?

For a long time I tried to photograph in a way that I would be unobserved. I always felt that as soon as the subject is aware that they’re being photographed, there’s a subtle change. But then in recent years, I’ve actually been in a situation where I’ve had to engage with the subject and the person in front of the camera. It was really revelatory in that I found that that exchange was wonderful.

Many of the photographs include people. Was human connection something you wanted to emphasize?

I certainly hope so. The book is not a political statement. It’s not social documentary. For me, photography always is emotional. It’s the same as acting in a way. I hope it’s kind of an emotional journey down that highway. At least, it was for me.

Did you ever feel you had to make a choice between acting and photography?

It was never a choice between one or the other, and it still isn’t. I do photography because I love it, but I don’t have to support myself with it. So I pick it up, I work extensively, I travel, I take lots of rolls of film, but it’s really just for the love of doing it.

Most of your recent work has involved collaboration with director Ryan Murphy. What’s drawn you toward working with him?

It’s been one of the great working relationships of my life. He’s one of the most creative, imaginative people I’ve ever known. It just so happens that his imagination and mine are somewhat in sync, so we have a shorthand now when we talk about a part, or something that he wants to write for me. The six different projects we’ve done together have been some of the most fun and the best parts I’ve played in decades.

What are you looking to try next?

Well, we are talking about doing a film of [Marlene] Dietrich. Dietrich in the later years, starting possibly in Las Vegas and going to the end of her life. We have a wonderful script already, so hopefully that will be the next piece. I hope it all comes together because I would love to do it.

There have been comparisons between your character Elsa Mars, from the fourth season of American Horror Story, and Dietrich.

Yes, there was the German accent and the idea of a cabaret singer from the Weimar Republic, so that was like a little taste of what it could be.

What artists, be they photographers or actors, have influenced your work?

The main actor who has mattered most to me in my life, and I had the great fortune of working with her twice, is Kim Stanley. There have been quite a few photographers, like Josef Koudelka, Henri Cartier-Bresson, Walker Evans and Manuel Bravo. I’m surrounded by my favorite photographers’ work, hung on the walls of my apartment. So I live with it day in and day out. Even if it’s not on a conscious level, on some subliminal level, it’s always present and affecting the way I see photography.

The discipline of acting and the idea of being present has helped with the photography. The photography gives me a chance to be absolutely alone, and that’s been a wonderful kind of antidote to the confusion and the chaos of working on a movie or being in the theatre. One really informs the other. 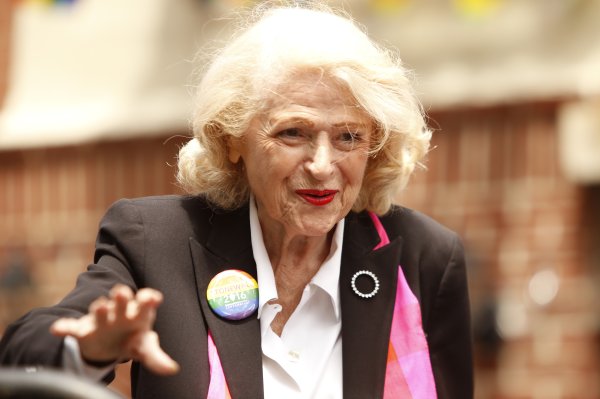 How the AIDS Crisis Changed the Dynamic Between Gay Men and Women, as Told in Edie Windsor's Memoir
Next Up: Editor's Pick